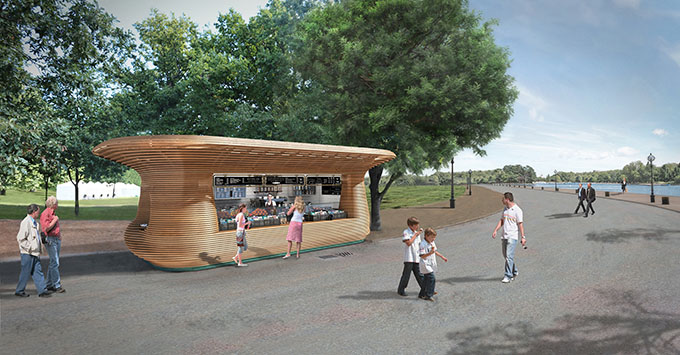 London and Malta architects Mizzi Studio just unveiled the first sculptural kiosk in a series of nine that will be built in London’s Royal Parks over the coming months. Take a look at the complete story after the jump. 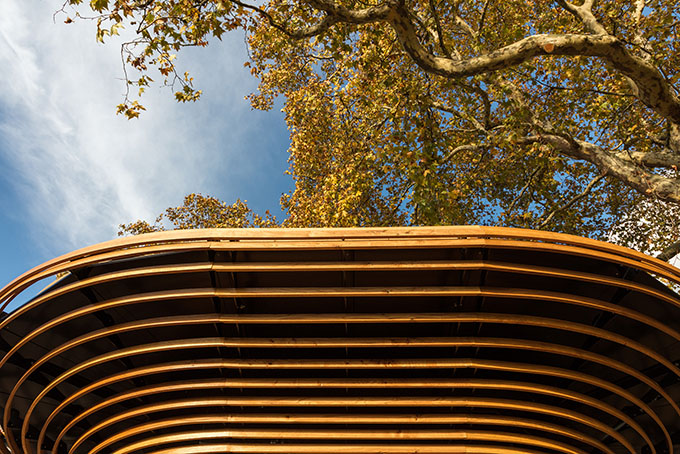 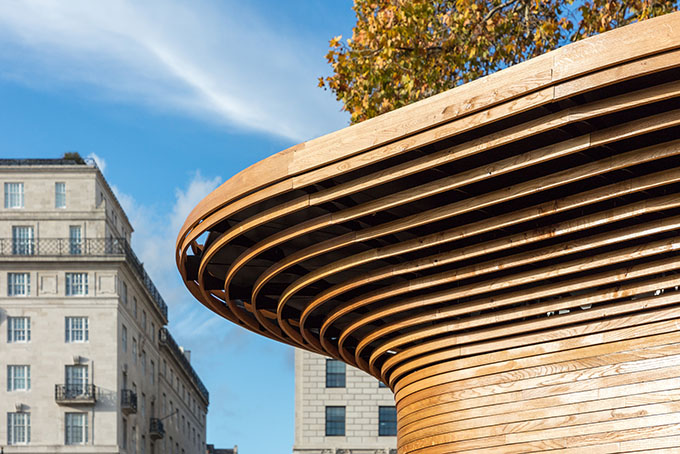 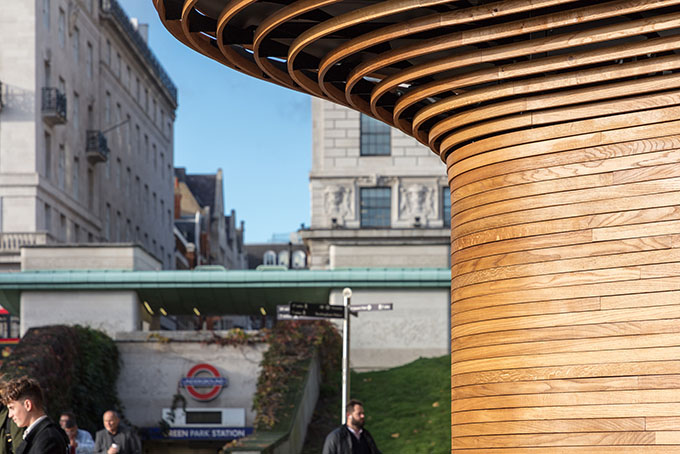 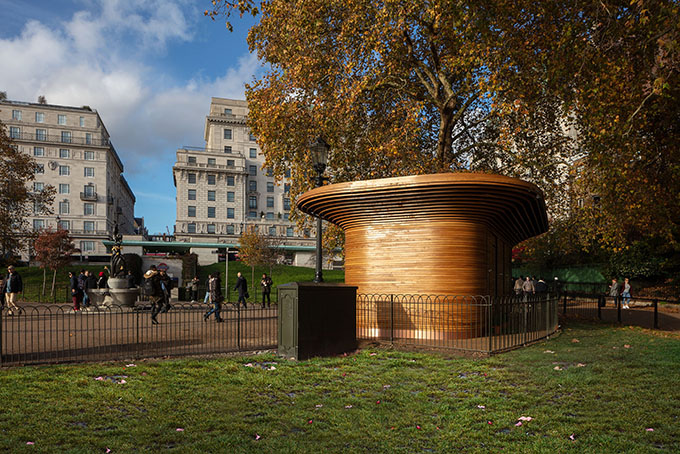 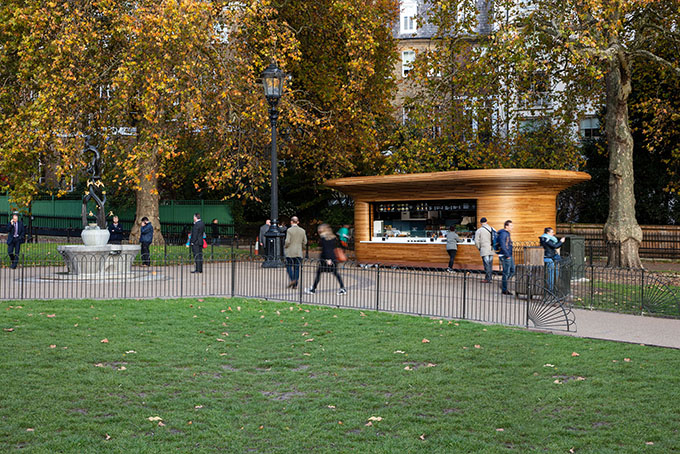 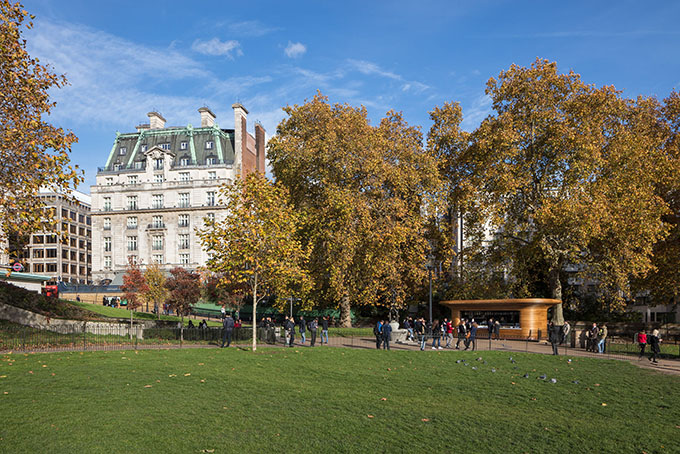 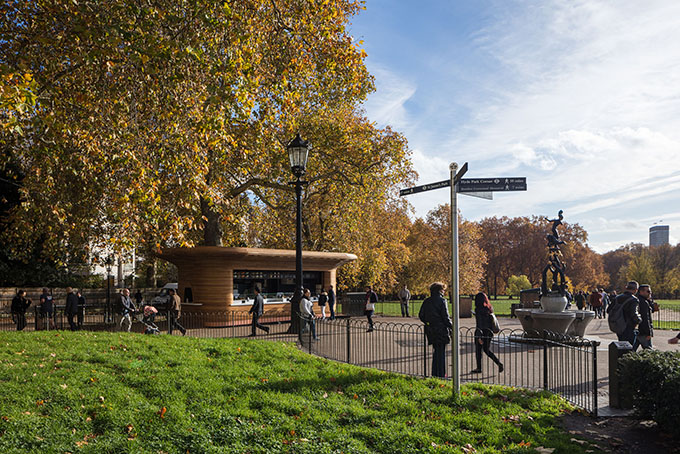 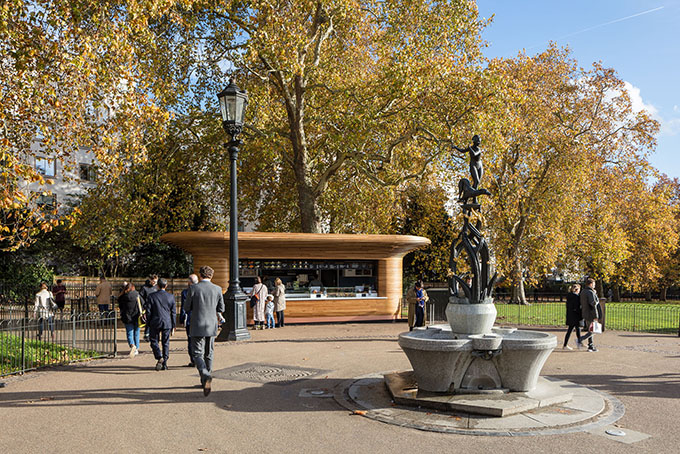 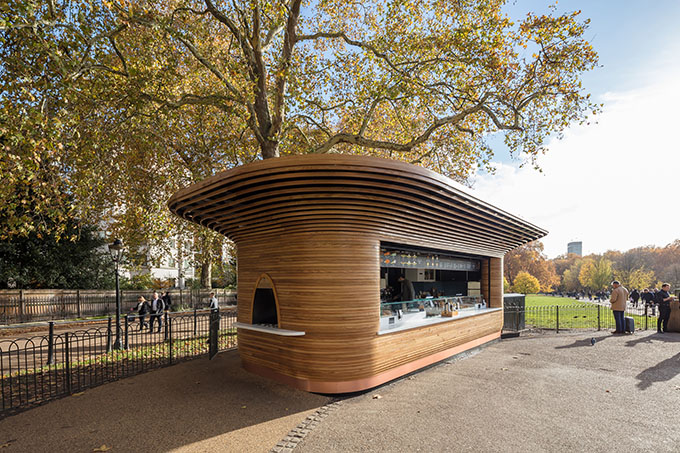 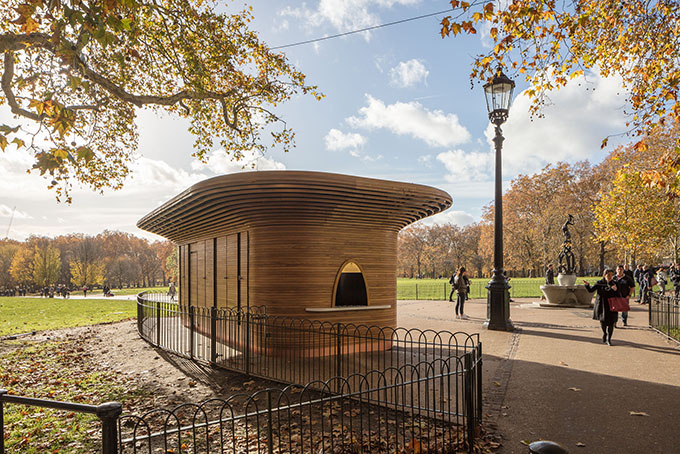 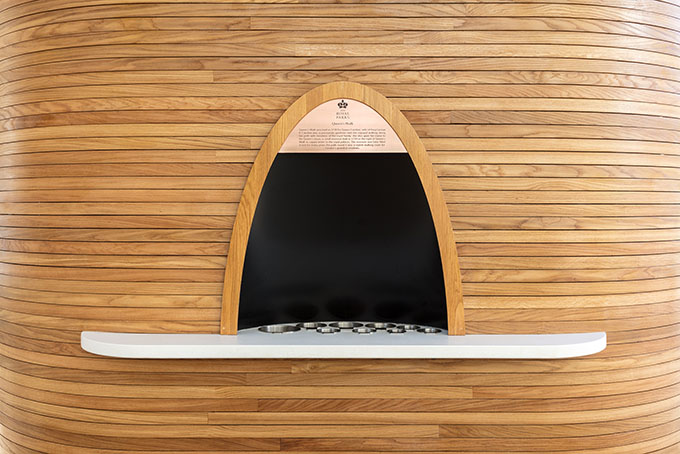 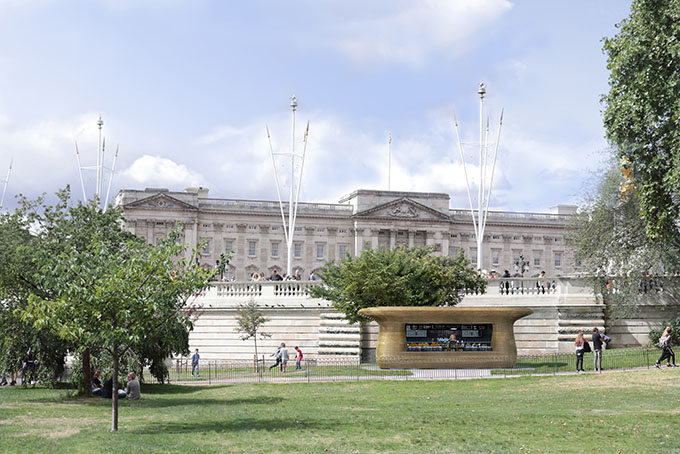 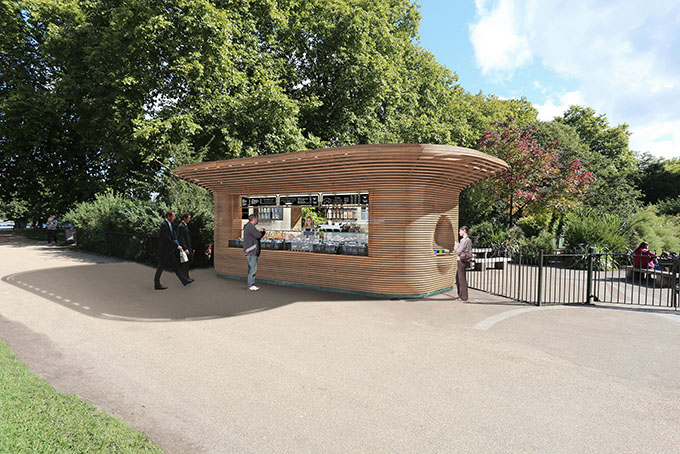 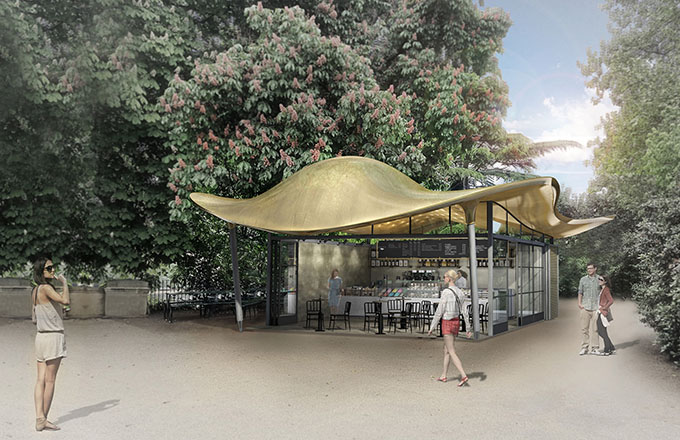 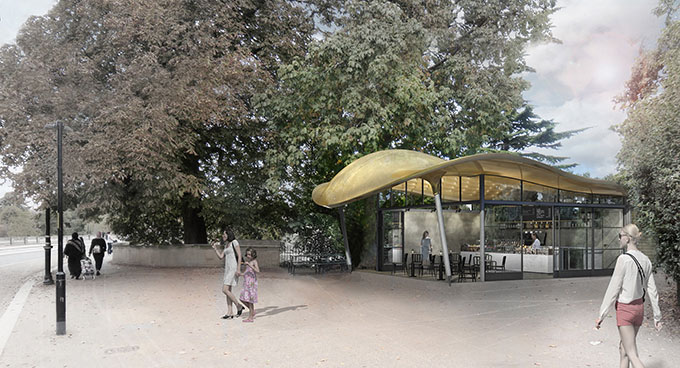 From the architects: The organic-inspired designs for the family of kiosks and new café respond sympathetically to the Grade I listed landscape and embody the ethos of The Royal Parks as a sustainability leader. Mizzi Studio has used sustainable materials and traditional craft techniques, together with state-of-the-art manufacturing methods, to create simple, functional forms that are both striking and elegant. Together with Colicci, Mizzi Studio explored the parks’ heritage and has tailored the design of each kiosk of the new café to the history and nuances of their respective site to create new visitor experiences and make a refreshment stop an integral part of a journey through the parks. The family of nine kiosks, designed by Mizzi Studio, will mark the entrances to Hyde Park and St James’s Park, as well as Green Park, where the first has opened in November 2018. The kiosks are
conceived as a family of individual forms that are united in their design language, with a 360-degree sculptural canopy that swells out like a tree’s crown creating a recognisable silhouette. The organicinspired volumes follow a continuous shape with varying degrees of curvature and differing cladding profiles, that provide contrasting textures to the surface. Each design variation is informed by the architectural or organic elements that the kiosk shares its space with.

The flagship Horse Shoe Bend kiosk in St James’s Park, in view of Buckingham Palace, will be clad in tubular brass and mirror the ornate precious metals that adorn Sir Thomas Brock’s Queen Victoria Memorial, while the choice of timber cladding for the rest of the kiosks rests on the relationship with thepark environment. Entrusted with bringing Mizzi Studio’s curvaceous design to life, Tom Raffield is steam-bending the oak cladding. Mizzi Studio has used high quality materials throughout the design, from sustainable oak to oxidised copper, new copper, stainless steel and brass.

Mizzi Studio’s holistic approach to the design also takes into careful consideration the use of space, energy efficiency and practicalities such as waste disposal. A rear entrance leaves the sides of the kiosk available for subtle and efficient service features including integrated bins and condiment holders.

Jonathan Mizzi, Director of Mizzi Studio, commented: “We are absolutely delighted to see the first kiosk open in Green Park. It is an honour to have been entrusted with such a high-profile project of this size and scale. The kiosks form an important part of The Royal Parks’ heritage by serving the public with refreshments and acting as local information points. The design challenge was to create a family of functional sculptures with a goal to continuously surprise and delight while further enhancing the visitor’s experience. This is an important milestone for Mizzi Studio and is central to our commitment to innovative sustainable design for the public realm.”

The new landmark café by Mizzi Studio, opening on the Serpentine Bridge in Hyde Park in spring 2019, will have views towards the Serpentine Lake and the Princess Diana Memorial Fountain. Mizzi Studio has designed the café to create an engaging experience, reflective of the neighbouring Serpentine Sackler Gallery by Zaha Hadid Architects and the legacy of the Serpentine Pavilions.

The building’s form is defined by a sculptural brass roof. The dramatic, undulating shape of the roof takes the curve of the Serpentine Lake as a point of departure and is evocative of the sweeping motion of a stingray’s flight, while the tactile quality of the underbelly of the canopy echoes the reptilian texture of a snake. Reaching its climactic point while hovering above the entrance, the canopy is suggestive of a stingray’s smile as it welcomes park visitors into the pavilion below.

Mizzi Studio has also drawn inspiration from Japanese architecture for the design of the café in Hyde Park. For the roof, they have translated the characteristics of a pagoda into a more fluid form, while the windows traditionally seen in Japanese tea houses have influenced the series of horizontal mullions that divide the glazing in the pavilion. The mullions create a semi-transparent open space where the boundary between indoors and outdoors is blurred, enabling the building to coexist harmoniously with its environment. 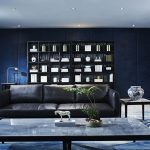 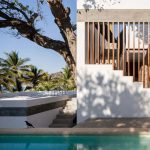