The tower is composed of a central volume that is pierced by a void. The void’s placement and movement is designed around Chicago’s environmental conditions, i.e. wind speeds and sunlight. Energy and wind testing had shown that the void slows down wind speeds, giving the tower the option for natural ventilation through each of the floor-plates. Through the use of the void, the tower also allows for maximum sunlight onto floor plates as well as allowing for even more scenic views to the exterior.

Located in the River North area of Chicago, the tower is graced with a large of amount views (Loop, Lake Michigan, Chicago River), and pedestrian activity. The void extends to the entry way presenting a experiential view up through the tower and framing a view to the sky. On the interior users are greeted with an openness to the space and an open floor plate due to the dia-grid structure suspending the floor-plates. The tower’s form is derived and translated by the movement and form of the void.

The tower’s program includes: Retail space on the bottom three stories looking off towards the river/lake, as well as restaurant space incorporated into the walkway along the river. The larger portion of the tower is programmed for office space. The office floor-plates are arranged for an open plan and operable spaces. The top portion is a five star hotel with a sky lobby disconnecting the office space and hotel, as well as an observation deck near the top of the tower. 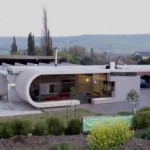 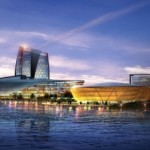