Prographic designed this contemporary residence located in Bucharest, Romania in 2014. Take a look at the complete story after the jump. The project was commissioned by a family with two children, who wanted a home with a nonconventional exterior, that would have a wide opening towards the outdoors, and whose interior would match their standards of living and combine comfort and simplicity with classic touches.

The site and the landform were defining features which configured the outline of the house. The „L”-shaped site generated a natural opening of the building towards the courtyard, while the land level difference of approx 3m led to a useful and aesthetic separation of the two entrances: the pedestrian – complementary to the ground floor and a second one towards the basement. The curved facade set a landmark for the concept, to inherit the curves and natural elements of the site and express them into a new construction, having în mind that the intervention should be as natural as possible and harmonize with the surroundings. Thus, the aluminum tabs from the upper part of the facade are rendered as a separate volume, underlining the terrace with a freeform curve, while having a dual function: that of a railing, on the terrace and of a visor for the sleeping spaces which gain more privacy, and also for the ground floor, considering they stretch below the upper level. Each slide arrangement was built perpendicular to the radius of curvature of each assembly point which enabled the image of the facade to vary– it opens or closes – as the observer changes its point of view, both from outside and inside the terrace. 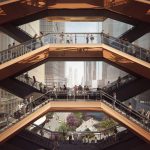 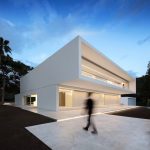