Project: The Beam
Designed by MVRDV
Location: Villeneuve d’Ascq, France
Website: www.mvrdv.nl
MVRDV wins a new competition with The Beam design, exploring the urban renewal of Villeneuve d'Ascq, France. The Beam urban space is set to accommodate a hotel, retail area as well as a surrounding green area, spreading on 15 000 m2. Construction will start in 2015. Development corporation ADIM Nord with MVRDV and de Alzua+ have been announced the winners of an urban renewal competition in the French town of Villeneuve dAscq, beating four other entries. The masterplan for a crucial site in the town centre adjacent to an inner city motorway, is the starting point of a wider regeneration of the areas public space. An iconic building, The Beam, will hover over the motorway signalling urban renewal and acting as visual reference point for the towns centre. A hotel, offices and retail space, totalling 15 000 m2, will be built on the site of a former petrol station, with construction expected to start in 2015.

Villeneuve dAscq is a new town located near Lille in the very north of France. The Beam will be icon of a larger urban generation effort in the town centre which is currently characterised by parking lots, large buildings and undefined green spaces. On an urban level the masterplan aims at a more sustainable form of development by densifying the town centre and adding identity and diversity to the site. The creation of pedestrian zones, and the demarcation and connection of the existing green spaces together also form part of the plan.

The parking spaces on the main square will be relocated into an 274 space underground car park on the new site. The adjacent buildings, which face away from the site will be extended to form urban blocks; each with a green patio at its centre. At the corner of the inner city motorway and the service road leading towards the main square of Villeneuve dAscq, The Beam will create an address for the town centre on the motorway. The site, one of the few places visible from this sunken dual-carriageway, allows the town centre to be visible to drivers passing by. The project is currently under development and will contain offices, a hotel and some retail space with a total area of around 15,000 m2, and the underground car park offering 274 parking spaces. The team ADIM with MVRDV and co-architect Jérôme de Alzua beat four competitors in a competition organised by Commune de Villeneuve dAscq. 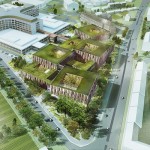 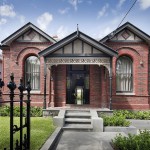