From the architects: In the late 20th century, a new type of architecture came into being. Architects restructured and assembled square boxes (modules) of different sizes into a complete building system. The detachable modular building has been well-received for its green benefits, convenience, and mobility. It has been evolved with innovation into a guiding architectural language that dominates the trend of thought in today and even in the future.

Status and dilemma: Located in Putian, Fujian Province, the project is adjacent to two arterial roads and surrounded by villages in the city. At the early stage of the project, it faces three major problems: the location of the sales center, the building volume and the ways of opening the center quickly. In light of the traditional development model, it’s a long time of waiting and undergoing uncertainty of the results from the beginning to the final presentation of the project. And from the perspectives of construction cost efficiency and sustainability, there is a large degree of waste of resources for many temporary sales centers (the sales center will be removed after the sale period is ended). It is the top priority that designers should consider how to transform and recycle existing resources effectively.

In the combination of the two practical measures of parallel thinking and industrial empowerment, the designers have subdivided the demonstration area into three critical modular components: sales center, interior decoration and landscapes. The building carrier is further integrated with the interior space while the landscapes are developed as an independent module.

The basic modules are fixed by special screws with customized waterproofing measures to ensure its safety during the service period. The modules boast ultra-high reusability as they can be put into use directly after being detached and transported to a new site when the service period here ends. In addition, the application of the new steel pile foundation system can minimize the interference on the site. The module-detachable sales center, which covers 300 square meters and weighs 150 tons, can be handled easily, bringing least impact to the environment.

The Inspiration of the Future City

The diversity and sustainability of buildings serve as adequate embodiments of urban development, and modular buildings work as a substantial demonstration of the characteristic living concept that upholds ecological-friendly and sustainable development. This project applies a modular approach to deconstruct the sales center’s functions with creative language to encode, translate, innovate, and
reorganize the six modular boxes. It aims to create a new futuristic living experience and city demonstration by adopting ultra-high metallic texture to the exterior.

The contrast between virtuality and reality becomes more prominent after reorganizing the building modules. The integrated design of architecture, curtain wall and the interior that expresses a robust futuristic presence, make the center different from other commercial sales centers that pursue symbolic significance. The horizontal layout of the building with metal texture stands out from the surrounding environment and meets the requirements of offering a wide field of indoor and outdoor vision at the same time.

The modular and detachable sales center with fast turnover capability enjoys high geographic and site applicability. The detachable sales center is designed as an embedded box with fresh metal texture. The building stands quietly above the water as a whole, delivering a sheer futuristic sense. As the functional “mission” is completed, the box will be removed silently and reassembled and reopened quickly at the next site.

Materials of the project

It is version 1.0 of the modular detachable sales center that owns strong universality. In terms of the design, architects strived to recall the classic traditional aesthetics through the reflection of frames and scenes.

It is an ingeniously design that updatable coverings are selected as the façade materials. whole-body silver-white metal texture materials, ultra-white glass, and terrazzo all make the building look futuristic, as if it is floating gracefully on the water.

It is a coalition of transparency, reflection, coolness and sharpness by combining the glass with metal plates. The two materials with varying features are combined and embedded in ways that convey the order of rationality and the sense of rituality of the space. 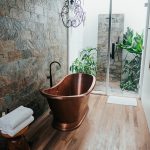 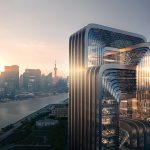