Located by the Yunlong Lake in Xuzhou, occupying over a million square metres, the launched project Vanke Future Town is a grand community with abundant landscape resources, wherein the demonstration area, as the first set of architectures to make an entrance to the land, will set the tone for the whole ongoing project.

The sales exhibition centre (which will later be converted into a community centre) is designed to be in proportion with and reflects the vast scale of Future Town and the geographical structure of the city. Small spaces for the entrance hall, screening rooms, separate meeting rooms and rear services, etc., is compressed into the east wing, ensuring a single piece of large – scale space for exhibition in the main building. This layout has granted the main building an open floor plan to achieve the multiple functions that it requires for exhibitions and as a community centre. Meanwhile, the abundant glazing of the facade gives views out to the city, reducing the architectural volume as it connects with the external space, enhancing its public characteristic.

However, in contrary to its sheer appearance, inside of the main building is a set of exceedingly complex and exquisite structure. In 2009, I visited a few ancient timber arch bridges (Beijian Bridge, Xidong Bridge, Xuezhai Bridge and the Santiao Bridge) in Taishun, Wenzhou, and its surrounding area in person. Looking up to the overlapping short timbers constructing a long-span structure, I was smitten by the beauty of its form, scale and the wisdom of the craftsmen. I since then had been revisiting them in later years. Yet, unfortunately, in 2016, less than a month later after my last visit, Xuezhai Bridge was demolished by the flood.

Our studio has since then been studying these traditional bridges and hand modelling their long-span structure constructed of short timbers, as a tribute to the traditional Chinese craftsmanship, in order to apply its structural beauty to our projects in the future. As in this project, the bridge structure is introduced into the large-scale exhibition space, as a piece of expressive element to be viewed from below, as a demonstration of Vanke’s technical strength and value. It is also reflected in the water patio in front of the main space. 600mmx200mm glued laminated timbers with different lengths are used as basic components.

Moreover, the part works as a horizontal fulcrum between the upper and lower timbers in the original bridge structure is replaced by steel tubes, which now support the timbers by weaving in where they interlock together. With this approach, different from the unidirectional arch the original structure performs for pressure-bearing, it establishes a system of continuous triangles and inverted triangles, which slopes rather gently in comparison to the original. When this set of wood structure is finally put up as a permanent art piece inside of the showcase that is this exhibition space with pellucid glass curtain walls on all sides, it is felt as though the history and traditions had been lost in time is recalled to our present.

The authenticity of the structure and the recreation of the spatial impression have been discussed repeatedly in the studio as the project progresses. As we attempted to apply the structure as a ceiling that acts as a part of a force bearing structure, its stiffness and bearing capacity has gone through calculation to meet the requirements. However, the force bearing structure it forms with a group of pillars is still not able to resist lateral force when being up in mid-air. In addition, in our original proposal, the glass curtain walls with group of glass ribs was adopted, which was suspended from the timber structure ceiling (said approach was eventually replaced by the current proposal that is to support the glass curtain walls with steel studs). To achieve this vision, the requirements on the timber structure’s bearing capacity would be raised, which would lead to the significant alteration of the piece’s appearance.

Therefore, the timber piece does not act as the major structure in the force bearing system. Instead, it is supported by a group of 8 steel columns and suspended from steel beams hidden in a roof above. The latter reinforcement dismisses the lack of lateral resistance in the previous approach as the piece hits mid-air. It, although, has been a great pity, since the timber piece does not physically act as a bridge, by which it is inspired. If it weren’t for this trade-off, however, the construction wouldn’t have been simplified, in order to be accomplished with the given time as short as 7 months. It also endows a visual sensation of floating to the space, when the suspended lumbersome looking timber piece appears to be levitating in the air, making a striking contrast with the lightsome roof above. The recreation of impression on the place from where I gazed upon the bridge underneath is effectuated. 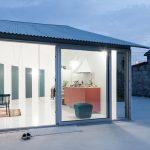