ACME has won an international competition for the design of the new headquarters of the Sächsische AufbauBank (SAB) in Leipzig, Germany. ACME has won an international competition for the design of the new headquarters of the Sächsische AufbauBank (SAB) in Leipzig, Germany. Chosen from submissions by 20 architectural practices, ACME's design was referred to by the jury as "an innovative and […] visionary solution, which is manifested in a striking, distinctive appearance. Especially noteworthy is the symbiotic unity of building and open space design." All submitted competition designs will be on display in Leipzig from 7 to 18 October 2013.

The Sächsische AufbauBank is the federal development bank of the state of Saxony, providing grants, subsidies, loans and guarantees to businesses, technology companies, investors, developers and homeowners. The SAB has a major presence in Dresden and is planning to build a new headquarters building in Leipzig to accommodate 600 members of staff, a conference centre, canteen and parking space, along with a major new public space. In previous centuries, the site was the location for the city’s stock exchange and tanning district. More recently, it was occupied by offices of the East German computer manufacturer Robotron. The site context provided a rather heterogeneous context, dominated by socialist apartment and hotel towers alongside 19th century grand hotels and late-20th century office blocks.

ACME's proposal for the SAB develops the traditional typology of a bank as an imposing institution representing stability, permanence and strength into a contemporary design for a bank of the 21st century. The traditional columns, acting as a transition between inside and outside, have been dissolved into a forest of supports carrying an overarching roof that covers the entirety of the site. Beneath this roof, a number of spaces are new public routes, and spaces are created like clearings in a forest, inviting inhabitation and passage. This open, partially green space recalls the site’s past as part of Leipzig’s pleasure gardens: acres of formal gardens with long, sweeping avenues, down which the city’s residents strolled together on balmy summer evenings in the 18th century. Some of the clearings will be occupied by landscaping, some by permanent artworks, while the largest open space provides amphitheatre seating and staging grounds for events. The columns and roof provide a sense of visual and acoustic enclosure towards the adjacent highway and integrate shading and passive cooling functions for the office spaces. This allows the offices to be open and transparent towards the new public space, creating an efficient, yet loose array of stacked and overlapping office floor-plates to accommodate the many differing departments of the SAB. Efficient shading and insulation in combination with activated exposed concrete surfaces and decentralised ventilation will create a simple, yet highly sustainable bank of the future – and an important new public institution in the centre of Leipzig. 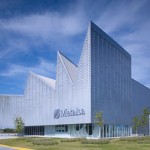 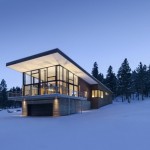