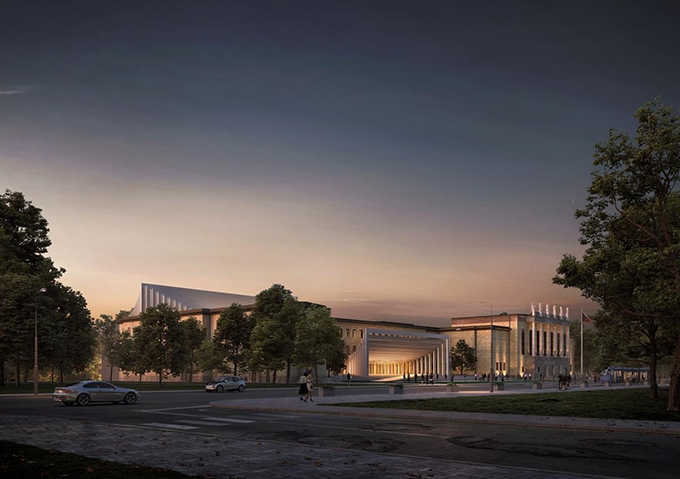 Henning Larsen Architects took the second place winner in international competition for the design of the Ostrava Concert Hall. The project emphasizes openness and connection to the outdoors to craft a quiet icon that will endure through the ages. Take a look at the complete story after the jump. 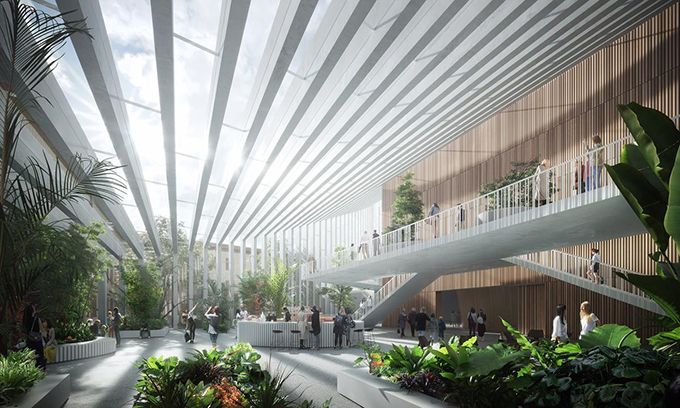 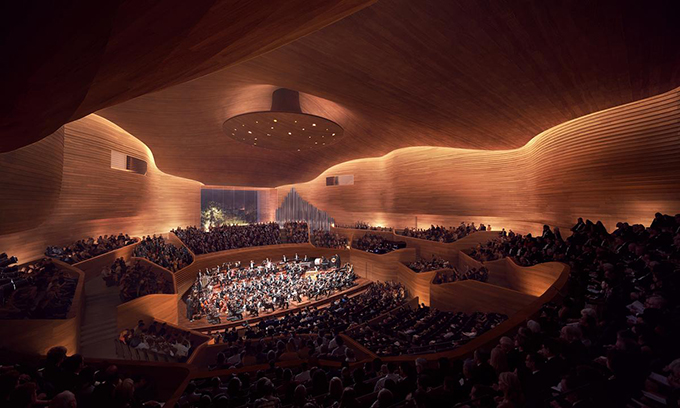 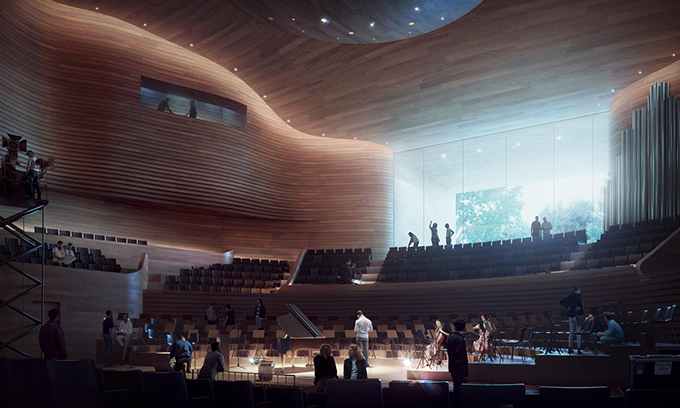 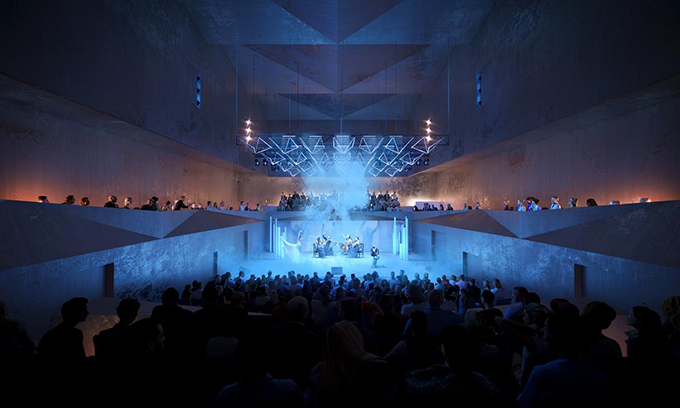 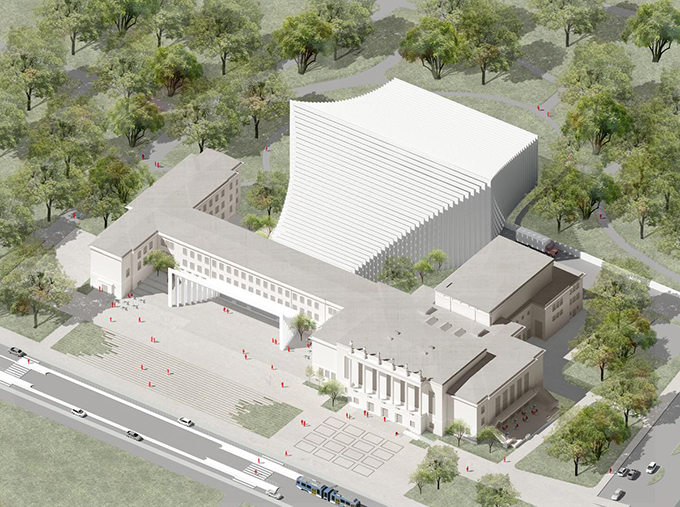 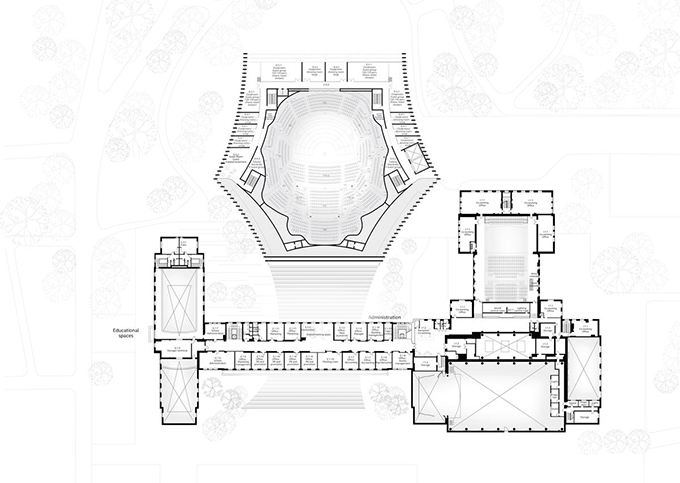 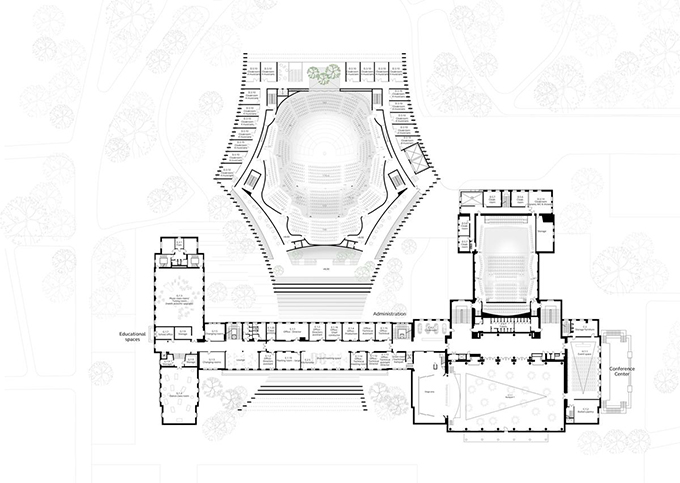 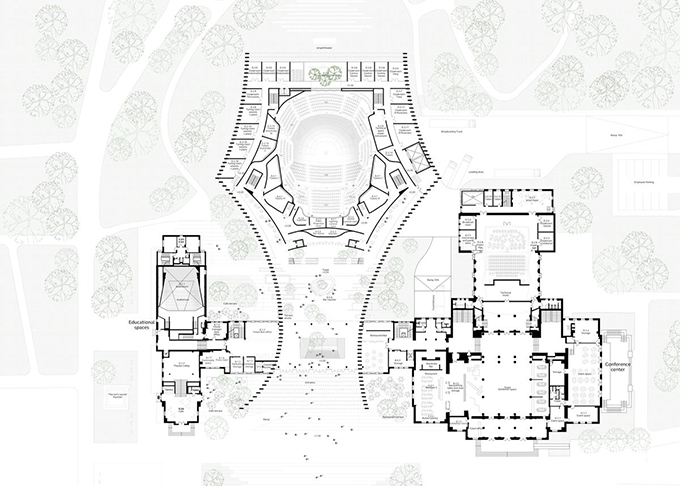 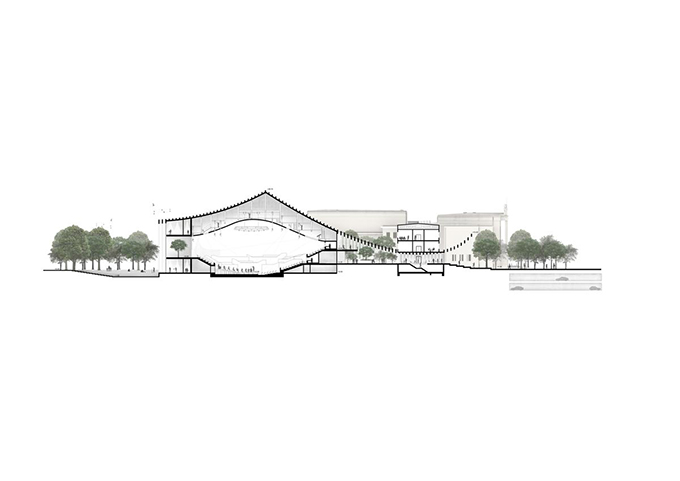 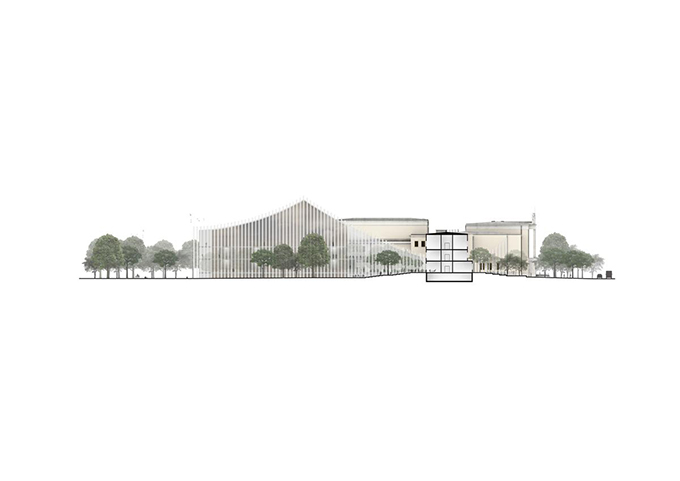 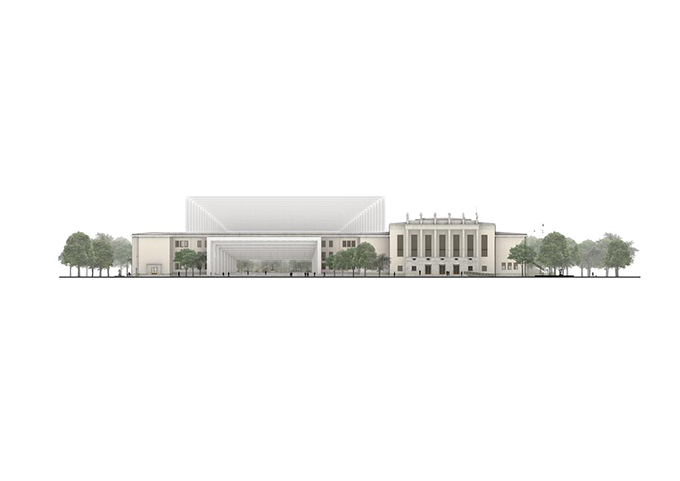 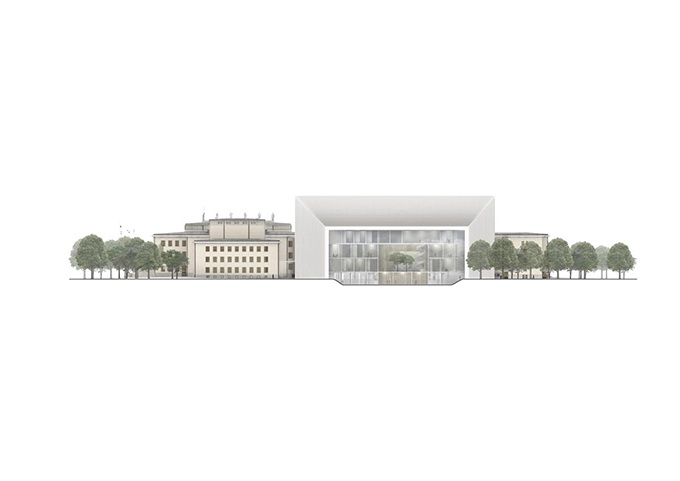 From the architects: From the street, the offset concrete frames that make up the entry to Ostrava Concert Hall seem to disappear into the adjoining House of Culture, resurfacing on the other side to rise triumphantly above the existing structure. The passage, which slowly contracts as it extends backwards into the Hall, invites visitors to step into a passage of light and shadow that casts a pattern of unwritten sheet music on the ground. It is an exercise in architectural harmony, reanimating the majesty of the midcentury campus.

Henning Larsen’s design for the new concert hall in Ostrava, a small city in the northeast corner of the Czech Republic, was named the second place winner in an invited competition set by the city. Announced in August 2018, the competition also invited works from Konior Studio, Architecture Studio, and Steven Holl Architects, who ultimately won the competition. Henning Larsen’s scheme was developed in collaboration with Nagata Acoustics, dUCKS Sceno, and Buro Happold.

“We envisioned the Ostrava Concert Hall as quiet icon, bold enough to open itself fully to the city,” explains Jacob Kurek, Partner and Design Principal at Henning Larsen. “It is a building that is always open, its very architecture welcoming passersby to move through the space as they choose, rather than closing spaces of culture to a rarefied few.”

An Adagio of Form and Space

The new concert hall is to be the new home for the Janacek Philharmonic Orchestra and is integrated within an existing campus occupied today by the Ostrava House of Culture and the Sady Dr. Milady Horakove Park. In stark contrast to the heavy walls of the surrounding House of Culture, the proposed structure blurs the lines between the indoors and outdoors; it is only during evening shows or after opening hours that the connection is limited or closed. This connection to the outdoors is a tribute to the composer Leoš Janáček, a local composer who often found inspiration in the park and for whom the Philharmonic was named.

Visitors can slip from inside the building into the park and vice versa, upending a traditional entry sequence (from street to entry to hall and back) in favor of one with no clear beginning or end – it is up to the visitor to choose. The open, welcoming foyer encourages the kind of informal activity that animates the space at all hours: performers rehearsing before the next day’s event, students revising together for an exam, a young musician practicing a piece for a competition, an indoor picnic lunch with friends.

A cage-like structural motif encompasses the building, wrapping the interior of the concert hall in a semi-transparent envelope rather than enclosing it. This approach bathes the interior in light on even the greyest days; objects that fall onto the glass simply cast shadows like notes on sheet music. Visitors pass through the entry and café space into a vast interior garden that introduces the main performance space. It is here that the brise-soleil structure takes on dramatic meaning: like curtains separating center and backstage, the concrete fins render the interior an extended stage, coupling with daylight to give every visitor their moment in the spotlight.

“The plan zips open the underused landscape present on the site today to reveal the full potential of a welcoming cultural house,” Kurek explains. “The openings that allow light to slip into the space during the day also transform the hall into a glowing jewel at night. It is a beacon for the city and signals a new golden age for culture in Ostrava.”

The performance spaces are separated within the building, with the main performance hall occupying the center and two smaller halls situated in the east and west wings. The main hall boasts world-class acoustical design and is organized in the vineyard style, putting musicians at the center of a circular seating configuration. The hall has a capacity of 1150. A large window set above the top row of seats maintains the connection to the park and adds a natural backdrop to performances.

The backstage area, including storage and practice rooms for musicians, is arrayed along the park-side façade, transforming spaces traditionally cramped and closed into ones broad and connected to the outdoors. Overlooking a grassy slope, the practice rooms offer a moment of respite before and after the intensity of performance. Support spaces for administration and staff concentrate in the upper levels of the existing structure, where they link into the culture house’s existing co-working program.

Henning Larsen’s scheme is an emblem for Ostrava, serene as the 19th century architecture in the city’s center. The four shortlisted schemes (from Henning Larsen, Architecture Studio, Konior Studio, and Steven Holl Architects) will be exhibited in the city in September. Construction on the winning scheme is expected to begin in 2022, with a completion date scheduled for 2024.

Henning Larsen is globally known for its expertise in operas and concert halls; in 2018 it was announced that the office would lead the expansion of Paris’ famed Opera Bastille. In Asia, the office is also completing the Shaw Auditorium at the Hong Kong University of Science and Technology, the Hangzhou Yuhang Opera, and the Foshan Opera. 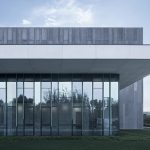 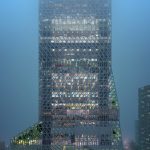