Project: Nature's Choice
Designed by Visiondivision
Website: www.visiondivision.com
Visiondivision got the commission to build a vacation house for two families in the north of Sweden. The plot is situated within a beautiful coastal area that has been included on the world heritage list due to its outstanding land uplift geology which is the most progressive on earth. The site itself has two levels; the upper one is a patch of beautiful untouched wood and the lower one is a rocky meadow with a rather steep cliff that connects the two plateaus. Due to plot’s protective status, the family wanted a house that would blend in with the surroundings. On the site lies also an old bunker which was constructed to prevent a potential invasion from the Russians. The bunker also had to be discreet when built, but used the underground to disguise itself. We saw three potential alternatives for this site which we wanted to explore; either a wooden house set amidst the forest or a stone house that lies in close connection with the rock outcrops. There is also a third alternative that is a little bit trickier to achieve; a house that should blend in with two different types of natures. The three different variations are related to each other when it comes to the layout of the plans and the outer perimeter of custom made bearing pillars that imitates the surrounding nature.

The forest house consists of two mirrored units with a separating wall in the middle that can easily be folded away when having family reunions. One enters in to a small hallway and thereafter into a kitchen with a dining table and a living room further in to the room. A fire place stands in the centre along the wall that separates the housing units. When the wall is folded away, one gets a twice as big living room with a large central fire place. The columns slant a little bit, becoming somewhat smaller at the top. They also vary slightly in size to resemble tree trunks. Some of the columns are strictly structural while the bigger also functions as wardrobes and such, especially in the bedrooms. The result becomes a light and welcoming house that merges with the forest and that is highly flexible with its folding wall.

The boulder house has also two mirrored units with a separating wall in the middle that can be folded away. Two piles of boulders on the forest plateau conceal two stairs that leads down to each living room. The roof is covered with grass to blend in with the nature. Taking the stairs down, one faces a fire place as first impression. When the separating wall is removed the families will get a quite impressing dining area with two fire places flanking the dinner table, a place worthy a medieval king. The columns are much heavier set than the forest house to mimic the massive boulders on the site. These pillars are mostly hollow, creating great storage space for the families. Some of the pillars are also carved out becoming alcoves where one can sit. The result of this variation is a rustic and homey feel. The house is almost invisible from the forest and integrates well with the rocky meadow. The third house leaves a smaller footprint and has two floors. The house is also based on our tailored pillar system, wide at its base and slender at its top that also fades from stone to wood. The columns cause the two stories to become completely different even though they are based on the same plan. With different material treatments on the two levels, we enhance the differences even further. The heavier set columns on the first floor create a cavernous and comfortable feeling with a lot of niches and a high contrast between dark and light. As with the boulder house, some of the columns are hollow and have various functions like wardrobes, furniture and storage. The flooring is made out of stone and continues out on a terrace overlooking the bay. The upper floor with the more slender columns blends in with the surrounding tree trunks behind it and have large windows with great views of the scenic cove. The result becomes an exciting house that has two completely different floors with two completely different perceptions. One family can for example live on the boulder floor one year and the year after switch to the forest floor. 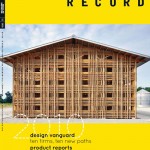 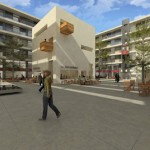