SALONE DEL SALON have recently completed their latest hospitality project in Zhengzhou, China – Wake Bar. The project adopts a narrative spatial language and dramatic lighting art to introduce an immersive atmosphere. It explores to create a sense of belonging for urban citizens, breaks the boundaries of different circles and strikes a resonance between the space and the soul. Discover more after the jump.

From the architects: Socializing spaces with distinct features are gaining increasing popularity among young people. Wake Bar, with clear positioning and differentiated designs, adopts a narrative spatial language and dramatic lighting art to introduce an immersive atmosphere. It explores to create a sense of belonging for urban citizens, breaks the boundaries of different circles and strikes a resonance between the space and the soul.

Located in a creative industrial park transformed from an old factory on the west outskirt of Zhengzhou, Wake Bar greets passers-by with its red brick exterior walls and further attracts people’s attention with a staircase that leads to the second floor. Through creative design, it induces people’s curiosity to explore what’s behind the red wall.

In “The Peach Blossom Spring”, a well-known story written by ancient Chinese poet Tao Yuanming, when the protagonist, a fisherman, enters a grotto that leads to an ethereal village, the story goes as follows: “At the beginning, it was narrow. Only one man can pass through. As I continued to explore, it became bright open all at once.”

That’s also how people feel when they step into Wake Bar.

As walking upwards along the staircase, visitors will bump into an eye-catching signboard. Turning left as the board indicates, they’ll find a narrow path that soon takes them into a totally different space. Within just a few seconds, they experience visual changes from darkness to brightness, and from narrowness to openness. Before they even know, the guests are shrouded in a vibe created by the lighting, which as if brings them into an “ethereal land of time and space” hidden in the city. The lighting, with the shadows it creates, instantly intoxicates the guests even before the alcohol does.

From a brand new perspective, design practice SALONE DEL SALON reconstructed the spatial system. The circulation route fits into the attribute of the space as a bar. Both a sense of openness and visual layering are well embodied at the same horizontal line. Bar counter, scattered seats, booths and private rooms, are all arranged in the bar. The glass partitions effectively create a flowing and open visual experience.

A tens-of-meters-long bar counter and a liquor cabinet are situated at the center of Wake Bar. Also as the spiritual center of the bar, the counter provides enough space for the interaction between bartenders and guests. Carefree talks, unrestrained emotional expressions, and laughter all happen against the background of the emerald liquor cabinet. Ordering a glass of cocktail and listening to a bartender talking about the story behind the drink, the guests will allow themselves to get lost as if at a gentle spring night.

Lighting is also an uppermost choice to create atmospheres.

The designers boldly redefined the realistic scenario of the bar. An installation placed under a red light, where a golden ball hangs up in midair with winding vines, and a golden abstract painting, placed against a green background, improve the sense of art of the space.

Different layers of light are clearly reflected through the mirrored material, which glistens and slowly sends out a sense of vague beauty. The boundary of soberness and drunkenness thus disappears in a tipsy vibe.

The combination of leather, metal and marble reveals a metaphysical nostalgia for the old days, while linear light delivers a sense of technology. The two styles form into a poetic connection of the past and the future.

The walls are treated in a simple way, to present minimalist spatial textures. Simple geometrical structures create an effect of visual deepness. The square units of the liquor cabinet, the strip lights and the ceiling altogether confer a sense of unity and tightness, while the mirrored materials enhance the sense of depth of the space. In this way, there comes spatial dynamics.

The whole space seems to be open, but it has a complete functional layout. Different zones are interconnected without interfering with each other. The design follows the principle of extending depth of field. It plays down the actual functions of the lobby, the passageway and the corridor to enhance the artistic vibes of the bar.

The project interprets the social needs of modern urbanites through spatial expressions. Everything, including the taste, the environment, the style and the art works, is presented in just the right way to satisfy the aesthetic appetites of guests as soon as they step into the space.

With a free and unrestrained style, the bar allows young people to unleash their pressure. Meanwhile, it provides a destination for them to soothe their nerves and socialize without burden while enjoying the pleasure of drinking.

In addition to being a bar, this project is also a place for artistic and creative exchanges, just as its name indicates—”wake up” and “get started”. In the future, the space, which naturally carries a cultural function, will present more niche art exhibitions and popular cultural products to echo with today’s evolving lifestyles through constantly innovated and diversified forms. 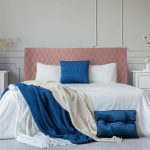 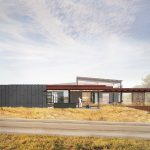