Bubble X will be a place which draws inspiration from the satisfied and unsatisfied fantasies and s*x drives. This project materializes the movement of liquid as the corporal fluid, which runs down the body during the moments of excitation.
As an adrenaline rush waving particles through the veins, inner surfaces made in red latex spread over the tower to corrupt his heart. Moving and lightness of bubbles create duality between rest spaces and living spaces in the building.
Living, partying, sleeping : the project subtly dissociates two types of programs in their volumes and areas. Hotel rooms are designed as modular standardization, representing metal skin of the tower. The housing that surrounds the site participates in this modular facade.

The building’s interior draws attention through its color and transparency. You could imagine the figures held prisoner within the building being projected as a shadow puppet.

Our aim was to simplify the contrasting program of the building and organize the tower in a way that gives customers’ clear routes throughout. The project represents a large variety of recreation programs, marked by bubble’s plastic themes: sports, food, nightclub and business.
The way of connecting the tower with its context had to be a catalyst that would allow the building capture the attention of pedestrians’ and entice them to enter.
The raised dancing floors are designed by volumes made with tubes that are integrated into the urban landscape. These volumes are cantilevered, allowing the space to vaunt over the public area and act as yet another teaser enticing pedestrians to enter the Bubble X. 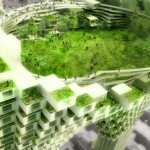 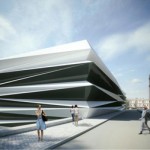