Evolution Design has completely redesigned this beautiful farm house  situated in Beijing, China, in 2016. Take a look at the complete story after the jump. The project is situated in ChangGe Village, Daxing County, in Beijing’s southwestern suburb. Before the renovation, it was a worn-out farm house built in the early 1970’s, with its original wood-brick structure commonly seen in north China’s country side. This place had no water supply nor a restroom. Even worse, interior floor elevation of the house was almost 20 cm lower than the courtyard, turning the house into a flooding pond whenever it rained, a safety threat to the entire building structure. Ironically, the area was troubled by water shortage – water gets cut off almost daily, sometimes during peak evening hours.
The remodel project was one episode of BTV’s live television show series called “Our Warm New Houses”, newly rolled out earlier this year. The show producer set up specific but stringent requirements on cost and construction speed. Design and construction needs to be completed in 45 days. All-inclusive budget is capped at 300,000 RMB (about 45,000 USD), including labors and materials on field work, site remodeling, interior construction, lights and fixtures, furniture and interior decorations, even purchasing new home electronics.
To solve the core water issue, our architectural design process thoroughly considered the challenges of both water shortage and flood control. First, we elevated the interior floor, adjusted exterior courtyard ground level and installed new sewer & gutter systems. In addition, a new water tank with a capacity over 2-cubic-meters was built at one end of the courtyard, to harvest & recycle rain water collected from the rooftops. In the evenings when water gets occasionally cut off, collected rain water could be used as a supplementary water source for toilet flushing or to satisfy other essential needs, for up to a year. At the same time, with water drainage now in place, the building structure stands strong even in pouring rain.
In terms of functional layout, we have made adjustments to re-organize the floor plan based on detailed communications with the residents, understanding their daily routines and habits. After we removed the suspended ceiling, more space had been released, along with the original wood structure and straw-covered ceiling texture are finally revealed, telling a story of time. During site survey process, we discovered a narrow pathway about 80cm wide between the west side of the building and neighboring wall. So we designed a view window at the end of the corridor toward the west side. Outside the window, swinging bamboo shadow helps to connect the interior space with the natural environment. 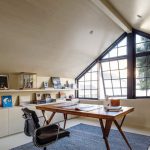