Located in Tijuana, México, Ph4 house’s main objective is to create a balance between privacy and openness, the project was mainly developed from two constraints. The first one is that the house will be inhabited by an elderly couple, so most of the program is on the first floor, a long glass and concrete box which breaks in the transition between the public and private space. Superimposed is a solid volume which fragments itself in the opposite direction as the one below, ending in a 7 meter cantilever. The second is the site, a triangle in which only 10 meters are facing the street, the rest of the perimeter is adjacent to other houses. It was decided to set the main volume on the center of the site, thus creating connections between interior and exterior along the succession of programmatic spaces. 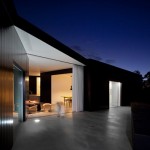 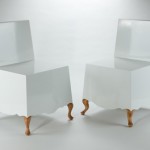