Abu Dhabi International Airport Midfield Complex is integral to the Abu Dhabi 2030 plan—transforming the desert into the ‘Garden of the Gulf’ through a design that responds to its natural environment, while meeting the needs of the rapidly expanding capital.

Conceived as a gateway to the city, the Terminal Building is raised up from the road level giving the appearance of sitting on its own plateau. In this context the building is the dominant and most imposing structure on the horizon with a profile silhouetted against the sky. At night the building’s illuminated interior creates a transparent structure which is visible from the highway over 1,500 meters away.

On approaching the Terminal Building the roadway system and landscaping work together to create a sequence of events culminating in a monumental civic space inside the terminal. Internally the scale of the Departure Hall, a 50-meter-high space rendered largely column-free through the use of long span leaning arches, endows the building with an open, outdoor quality, with the supporting arches visually separated from the roof to enhance the lightweight feel. The civic nature of the central space, the heart of the X-shaped complex, is complemented by retail and food outlets, a program of public art including a gallery space, and a secluded garden.

On plan, the X-shape provides the greatest programmatic efficiencies enabling the terminal to extend from 39 to 49 gates which would ultimately process around 50 million travellers each year. The roof of the piers along the X is ‘pulled down’ on the facade in an undulating form to protect the building and its habitants from the sun. Also guided by the project’s environmental objectives the building includes a number of measures including the reduction in the use of potable water by using dry climate landscaping and the efficient use of natural day lighting supplemented with low energy lighting. 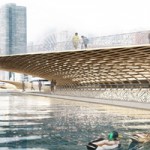 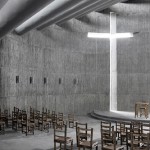