Pâtisserie La Galette project located in Belo Horizonte, Brazil is work of talented architect David Guerra. La Galette’s project makes an allusion to affection, singularity and refinement, seeking to portray the identity of old European patisseries with a modern touch. For more, continue after the break: The initial concept of the project was to reinstate the status of a buffet and patisserie with 25 years of market, while providing it with a new identity. La Galette’s project makes an allusion to affection, singularity and refinement, seeking to portray the identity of old European patisseries with a modern touch. The project also has sustainable thought as a principle, based on the three pillars of: recycling, reusing and transforming. The light pendants above the tables were made with reused mason jars from the old store. The gypsum recessed lamp, the refrigerated showcase and the chairs also came from the old store, receiving a green automotive paint coating, providing them with greater visibility in the new space. The golden cabinets were made with various door designs and mirrored interiors, giving greater spotlight to the exposed products. The golden tint is at the same time seductive and welcoming, while the pink brings a touch of irreverence to the space. As a contraposition to this colors, blue, gray and black appear on the cement tiles, bringing modernity while still making reference to an antique conception. The expositor on the window shop, designed by the architect as two linear pieces on a sequence of lathed supports, also reveal the personality of La Galette, bringing an irreverent form of presentation. A handmade scissor window secures the window shop. 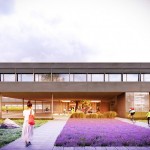