IN • X designed the Siji Minfu Roast Duck Restaurant  in Qianmen, Beijing, China.  The design of the restaurant uses subtraction to create a wisdom of keeping quiet in a noisy neighbourhood. Take a look at the complete story after the jump.

How long have you not stopped to visit a city?

As an ancient poem once described the Qianmen Street: “The green and the red are setting off each other on the both sides of road; it is a busy street with happy and inex-haustible people.” In order to make out the appearance of a city, one must explore its ancient streets; because the original appearance of the city could be corroded by time, but the memory of sound, architecture and food will never fade away.

As a commercial street which has witnessed the prosperity of Beijing over the past generations, Dashilan once had numerous theaters and club houses and it had attracted a lot of high officials, noble lords, common people and famous scholars. Apparently, it is a lively and busy street with crowds of people, and in fact it is also the epitome of old Beijing culture.

Based on this background, Siji Minfu Roast Duck Restaurant, which bears the mission of cultural restoration and inheritance, has been quietly completed. With the stimulation of sensitive taste buds, it opens up a picture of the urban context.

Considering the connotation of traditional architecture to awaken deep memory, the De-signer Wu Wei started with “emphasis on the symbiotic relationship between indoor and outdoor” and established the core of this creation.

The imitation white marble guardrail at the entrance is taken from the pavilion in the traditional royal building, which is an inward extension of out-door elements. The designer sets a partial waterscape, which is inspired by the Nine-Dragon Wall of the Forbidden City, creating a rich visual focus for people who entering the space and strengthening cultural identity at the same time.

The partially hollow slab allows natural light to interact with the waterscape freely. It is agile and transparent under the reflection of skylight. Among the sound and light of water, it also expresses a wish for prosperity.

The black bricks taken from the old Beijing Siheyuan constitute the paving throughout the design. The slightly cool black color makes the space reveal a solid sense of simplicity while maintaining purity.

Brass strips are one of the few materials in this project. With neat lines, it injects temperature into the cold-colored space,immediately balancing diners’ perceptions.

Previous Siji Minfu Restaurants used to convey the brand’s identity through the image of “one scene in a step “. While for this restaurant in busy street, the design uses subtraction to create a wisdom of keeping quiet in a noisy neighbourhood.

The rectangular ambulatory trail provides a smooth dining experience, which divides the size and space reasonably to ensure the connection of space. This arrangement is based on the careful consideration of special geographical location and guest mobility.

The large open dining space has bright natural light, where the light gray leather chairs blend naturally with the environment. People who stop and stay here can get an endless relaxation, while feeling the collision of ancient and modern culture as well as the unique brand power.

The black partition frame is the only dark color in space. It has similar form to the widely used wooden grille, but it has different density, thus forming an orderly rhythmic beauty, and also becoming a tie between small spaces.

In a more private box space, a large area of elm wall panels conveys a delicate atmosphere that is as warm as jade. With no redundancies, it complements the black brick wall.

The materials are displaying their most primitive appearance, texture and character in the space. It doesn’t mean a mediocrity of design, but a profound “moderation aesthetics” from design.

In the era when eating is no longer a matter of just food, the spirituality of brand and culture becomes a vital competitive force. In this project, the designer embeds the historical foundation into the brand characteristics of Siji Minfu, and also brings a deep under-standing of the city’s cultural genes to diners. 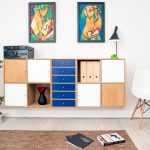