Atelier DYML recently completed their latest project – YUE City, the largest shopping mall in the western district and the second largest in overall Guangzhou city. Take a look at the complete story after the jump.

From the architects: YUE City is located next to Xiwan Road in the northern edge of Liwan District in Guangzhou, China. After going through a demanding 600 days of transformation effort, it was unveiled to public in September 26th 2020 as the largest shopping mall in the western district and the second largest in overall Guangzhou city, turning a new page in urban revival.

Back in the 80’s, the site was once a cement production plant which was an iconic landmark of the developing communities. In 2006, in accordance with the government’s vigorous plan to upgrade the business service industries, and as part of the three major urban reform projects at the time, the plant was demolished to make way for the Fortune World International Footwear Wholesale Plaza which housed more than 3000 tenants. It was a historical effort ever made in the local wholesale industry to consolidate majority of the footwear wholesalers under one roof. However, with the fast growing competitions particularly the e-commerce, the traditional wholesale market has become lethargic and obsolete. Many dull and cumbersome wholesale big boxes were either converted into different uses or left vacant.

In 2018 Yuexiu Group approached DYML as the lead designer and was tasked to convert the existing building into a regional shopping landmark that will fill the huge retail void in the Liwan and neighboring districts.

1. Site Context
The site is surrounded by newly developed residential communities at the north and west sides. To the east, separated by commercial railways is one of the few traditional southern quarters that houses many workers in the wholesale industry. The quarter is connected to our site only by a pedestrian bridge over the railways and has huge daily traffic. The south and west sides of the sites are the older parts of the town which have many popular elementary and middle schools. Therefore, the consumer group of the project is mainly targeted at young families with children.

The Xiwan Road at the west is the one and only primary access to the site, and the nearest subway station is the Xicun Road Station of line No. 5 at about 1km away. The huge traffic on Liwan Road and confused pedestrian walkways, coupled with the lack of urban pockets has made the travelling experience less desirable. The old image of the lackluster and disorganized cement production plant sticks in the mind of the community.

2. Existing Structure
The existing building was four identical square blocks, 100m long by 90m wide, 5 levels above ground and 2 levels below, a total of 280,000 sqm of building area organized by cruciform shaped promenades. At the intersection was a majestic 1,900 sqm circular plaza capped with a domed skylight. There was a five levels annex at the east side of the main building, used to serve predominantly as loading docks of the wholesale stores. Surrounding the building particularly the west side were huge entry plazas with no distinctive identities. Meanwhile, the facade was composed of identical square boxes all around which was quite easy to lose direction in such symmetry and lack of hierarchy. Clearly, it was designed for a wholesale market and has becomes out of place.

The existing building posed a huge limitation for major changes. With time, cost and sustainability in consideration, we have decided to keep structural changes to the minimum, recycle most of the major equipment, and stay on course with the existing fire escape strategy. Our proposed design will have to work around these restrictions and improvise.

From a holistic approach towards the program, architectural design, and space planning, we arrived at the Design Concept – METAMORPHOSIS, a complete transformation that signals the rebirth of the development and rejuvenation of the community. It transforms the current big boxes into a series of fun and meaningful spaces, a joyful shopping destination, and an iconic landmark of the community.

1. Colorful Screen, the Wings of a Butterfly
The new façade has to leave a strong impression to the city and its people. With the parametric design tools, we drape over the existing massive boxes with more than 30,000 pieces of white aluminum panels with 5 different colored LED perforations, forming undulating waves that mimic the wings of a butterfly. At night time, the LEDs are programmed to lit up an impressive show, transforming and animating the urban streetscape.

2. Grand Gateway with Mega LED, the Head of a Butterfly
Along the 200m west main façade facing the urban plaza, we broke the plane and inserted a grand gateway into the building. The gateway is a set of symmetrical curved structure symbolizes the head of a butterfly made of 280 pieces of faceted glazing panels with LED media mesh. This feature creates a strong focal point and draws attention from near and far, and complements the transition between indoor and outdoor space. The new gateway design breaths new energetic vibes to the city, especially at night when the LED media mesh is lit up.

3. Entrances and Plazas, Permeable and Welcoming
There are two secondary entrances each allocated at the northwest and southwest corners. The entrances are designed with sunken plazas to ease the natural slope of the site, and connect people at both the ground and basement levels. The sunken plazas not only bring values to the basement corner retail with more natural lights and visibility from the street level, but also provide social interactive venues which are articulated with four seasons landscape pods, water features and alfresco.

Ironically a successful shopping mall nowadays isn’t built simply on the idea of shopping, but more on an integrated consumer experience. Working hand in hand with the leasing team, we came up with the idea of ‘an excursion in wonderland’ where we emphasized on creating memorable scenes inspired by a mix of indigenous, artistic and cultural, natural and high-tech elements at every important intersections to heighten the sense of explorations and the joy of discoveries.

1. Circulation
In the efforts of converting a rigid wholesale box to a more sensible shopping mall layout with minimum impact on the existing structure, we kept the existing cruciform promenade and improved its circulation by linking to all the 14 atrium spaces and 7 entrances with a new loop. The combination of the cross and loop circulation avoids dead ends and enable people to travel easily from one point to another in a clear and simple manner.

2. Design Tone & Language
The overall interior space uses light warm oak and white as the basic color scheme, while the floor and ceiling design utilizes curvilinear profiles in order to brighten up and soften the rigidness of the space. This also serves as a continuous backdrop for a mix of retail themes and programs.

4. Grand Butterfly Plaza
The Grand Butterfly Plaza is the main attraction of the mall. It is an impressive 1,900 sqm of atrium space capped with a domed skylight structure. It is an ideal space large enough to house any promotional or social events with an unobstructed 360-degree view from all floors above. We incorporated a large vertical LED screen in the plaza and applied rings of LED panels around the balustrade in order to program a borderless sound and visual effect, an absolute immersive experience.

5. Eight Uniquely Themed Atriums
A total of 8 uniquely themed atriums are purposefully planned across the mall. Besides the Grand Butterfly Boulevard and Plaza, there are also the Canton Avenue which is a clash of trend and culture, the Butterfly Wonderland which engages lifestyle techs and sports, the Floral Fantasy World that inspires imaginations and creativities, the Garden of Oz which is filled with trendy games and entertainments, and last but not least, the Cascading Mountains and the Streaming Waterfalls. It is a blend of impressions of art, culture, nature and technology working together to entice the five senses.

6. Three Main Streetscapes
We also branch off from the main themes to create several streetscapes that enhance certain retail programs. They are the Canton Food Court with a parade of good eats, Kids World with fun interactive play yards, and Techno Sport with energized neon runways. These are elements of surprise and instagrammable moments which intensify the overall retail experience.

7. Intimate Design Details
The careful and intimate design details are reflected in all the auxiliary space as well. The overall consideration for human scale and comfort extends throughout the malls even in the restrooms, elevator lobbies and information desk.

The YUE City makeover was a demanding process of 36 of structural columns uprooted and 1,196 reinforced, 4,340 of structural beam reinforced, 17,000 sqm of concrete slabs razed, 110 tons of structural steel trusses removed, and many more staggering numbers and efforts in the midst of the Covid-19 global pandemic. We as the lead designer were responsive both on paper and on site to resolve issues that arise during the design and construction stage.

Any form of public space is an important part, a vessel of life and activities of an urban community. Major changes in social and economic aspects usually result in decay of the public spaces particularly retail. As a retail designer, we understood that the key purpose of retail space regeneration is not only to restore its economic and culture viabilities but also to encourage survival. This project has faced the same decay and through a 600-days of vigorous transformation, YUE City re-emerge as a vibrant development, with a sense of identity in the new horizon. 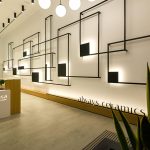