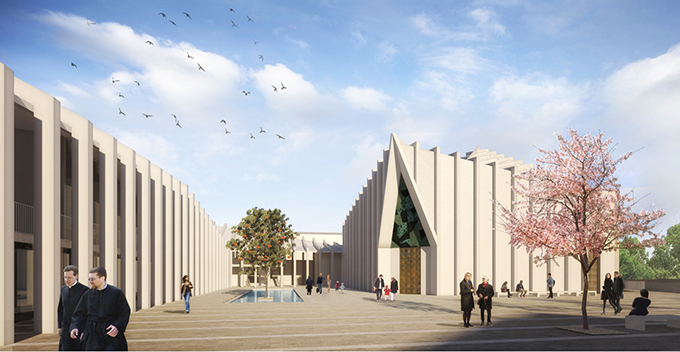 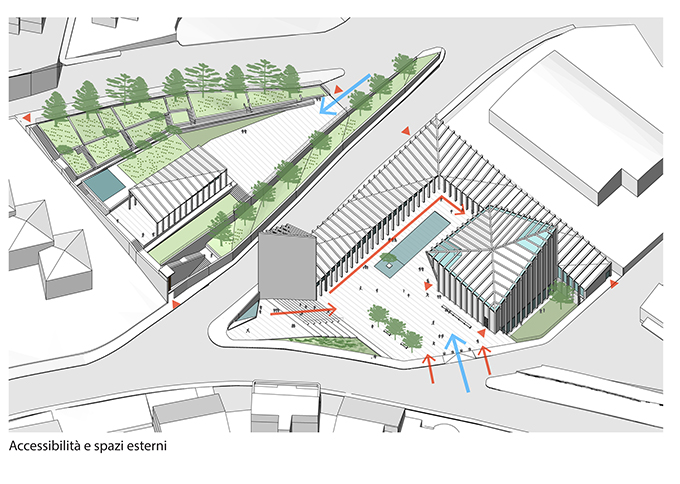 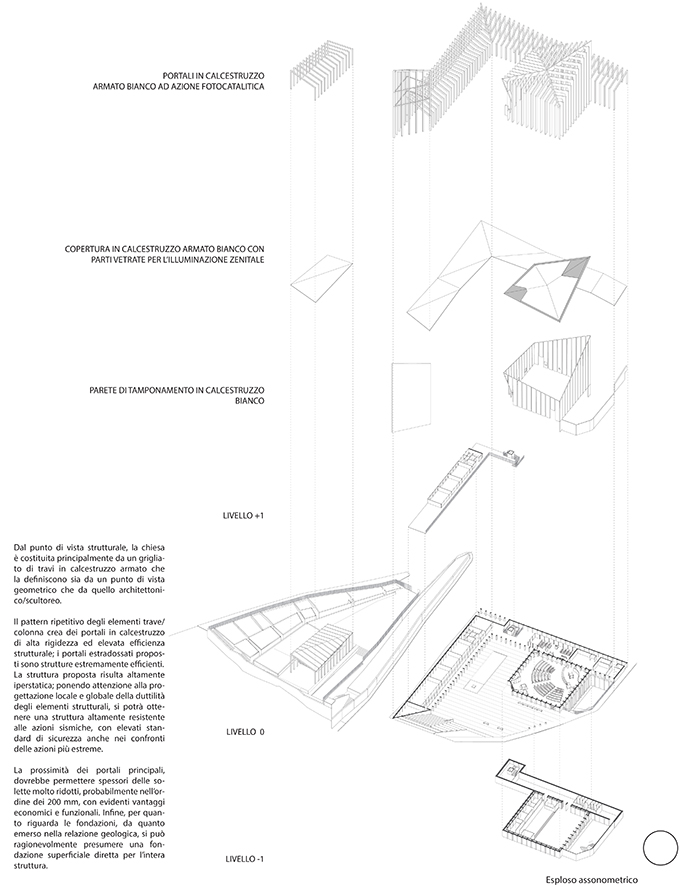 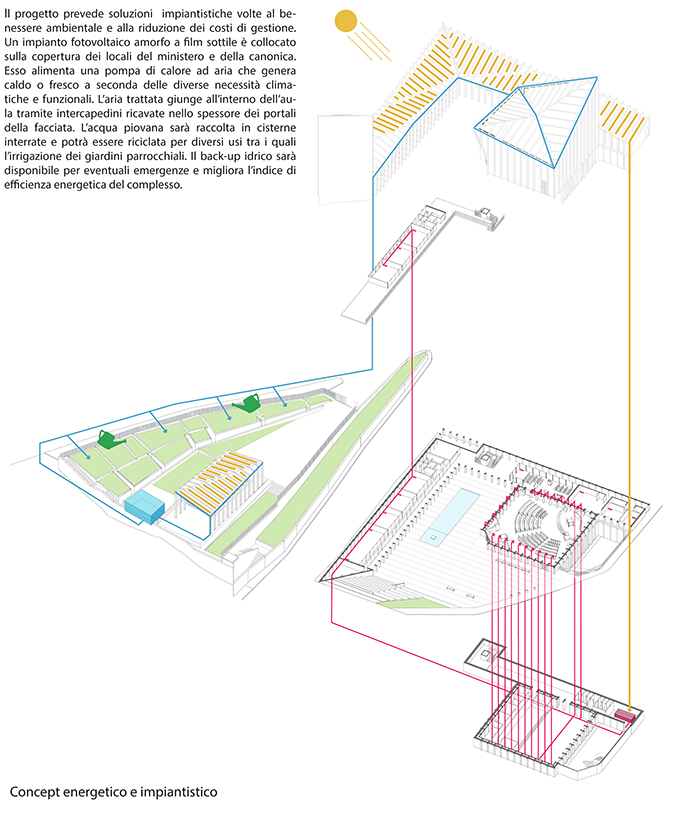 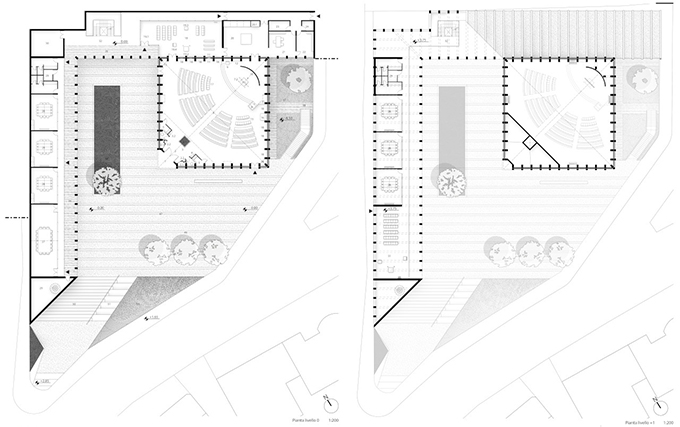 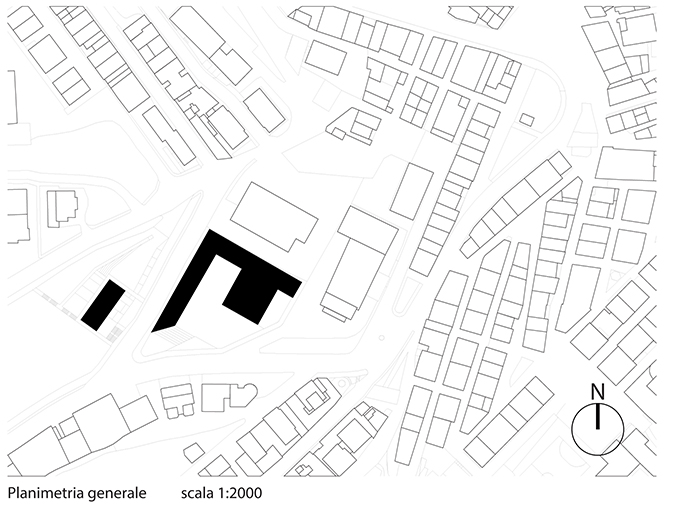 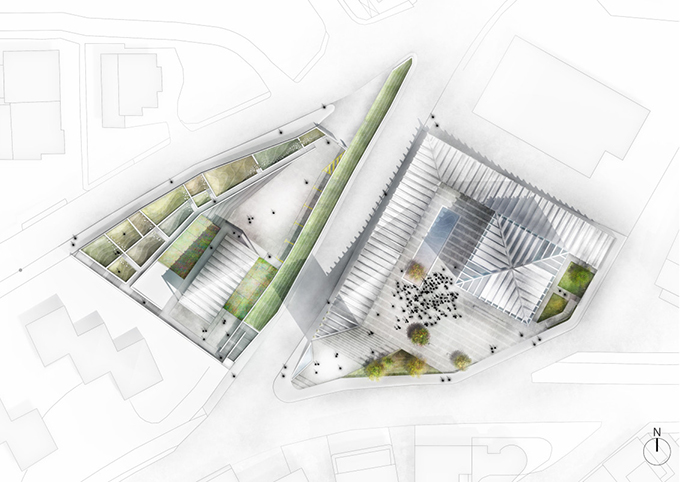 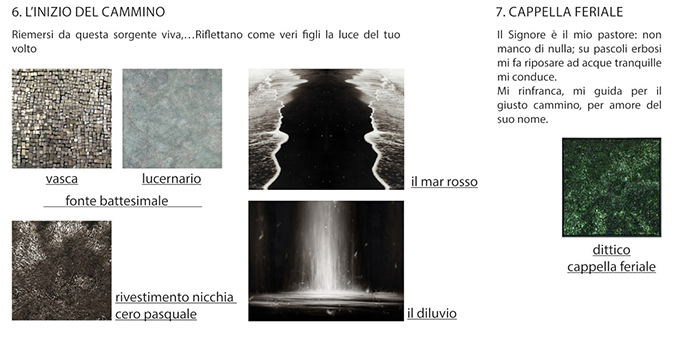 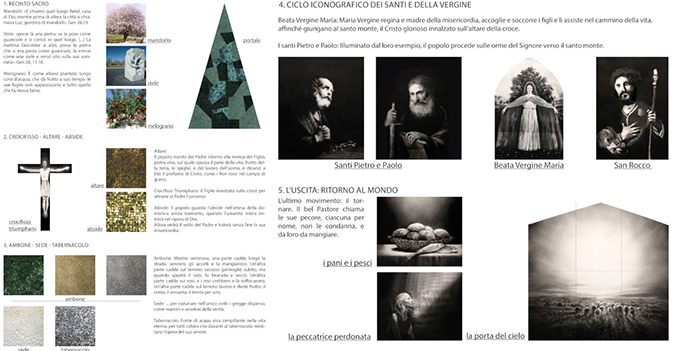 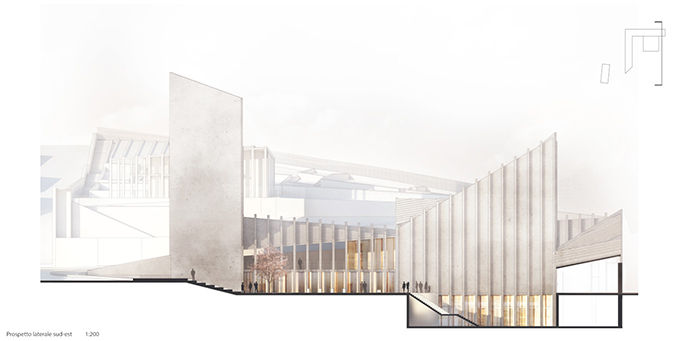 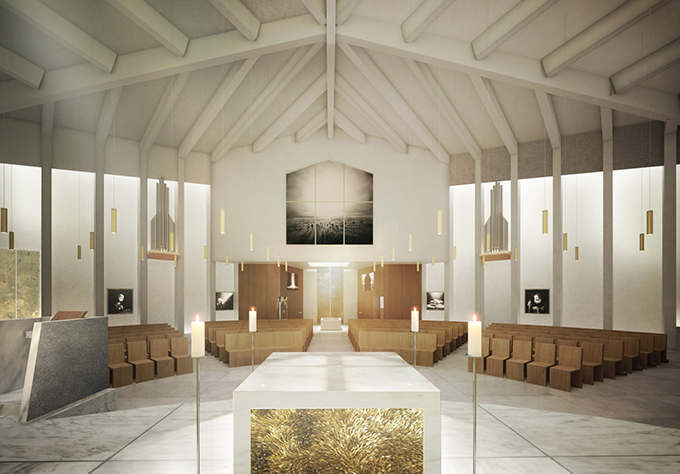 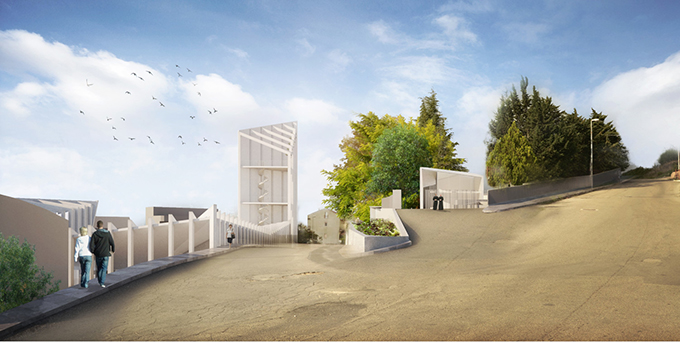 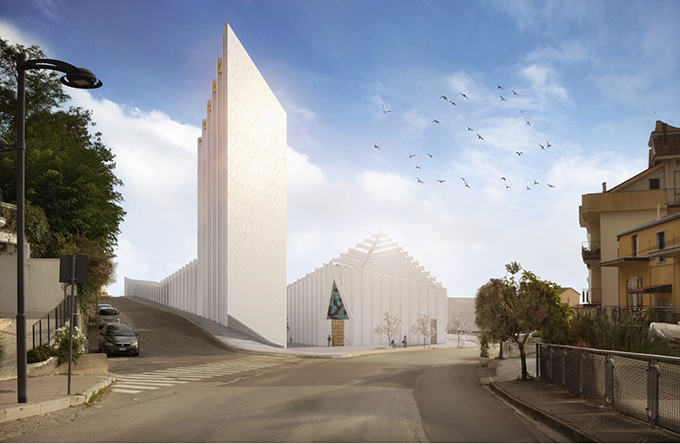 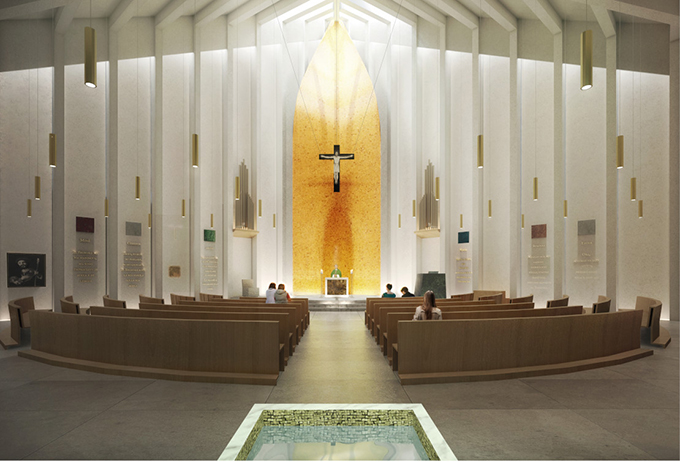 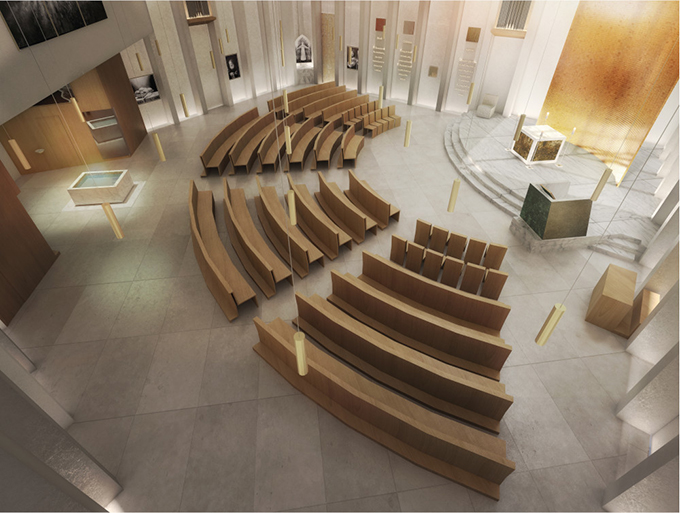 From the architects: The lot is located in the north-east/south-east expansion zone of the old urban area. The land is located on two different altitudes and cut by a steep road. The new expansion lines give the site an ideal size of hinge between the old town and the new urbanization.

The church will have the task of orienting, disposing itself, as in history has always been, “ad orientem”. With the facade facing west and the apse area to the east, the church appears as an isolated body. To solve the problems related to the practicability and the removal of architectural barriers, the whole area is brought to 0 level.

The churchyard becomes a place; a collective space totally accessible, whose perspective flight, flanking the bell tower, converges on the portal in an ideal liturgical diagonal. On the parvis, a mirror of water, the symbolic presence of a pomegranate and a row of almond trees reinforce the urban device, filtering and limiting the space.

From a distance, from the overlooking hill, from the sanctuary of Santa Maria del Belvedere, the new profiles will be unmistakably recognizable as a church, which will also dialogue with the Mother Church, placing itself altimetrically in a lower position.

The entire parish complex is conceived as a unitary architectural organism in which, following the course of the lot, a series of structural septa generate the shape of the complex and order its functionality, culminating in the church, whose bands recall the local buttresses and archetypal compositions typical of the towns of Basilicata.

The roof has four pitches. Their course helps to create variations in perspective based on the point of observation. The rectory, located at the top of the lot, dialogues with the church thanks to the white and the same formal solutions of the complex.

The bell tower, with five bells, emerges towards the sky on all horizons, identifying, attracting and acting as a meeting point and lookout point.

The location of the church is the geometric answer to the place. The liturgical space is enveloping, rhomboidal; composed of structural partitions that contribute to give an upward thrust. Everything is white, ethereal, with the exception of the pediment on the west facade, made of stone material.

Few but important materials: granite for the flooring, wood for the confessionals and the benches. The liturgical places are made of Apricena stone and decorated marbles. Light draws, becomes a building material. We pass from the penumbra of the narthex; at first light, on the baptistery; up to the great light, on the altar.

The curved apse is a golden three-dimensional mosaic, which rises in height and seems to dematerialize, becoming heaven, thanks to the use of zenithal light. The ceiling, with the lateral light cuts in the roof, is also suspended. The cuts on the walls, on the other hand, give continuous soft light.

The arrangement of the liturgical places makes it possible to be active participants; not mere spectators. From the churchyard, the faithful begin their journey towards the event of salvation: the row of almond trees, the pomegranate tree isolated near the stream of water, the stele with the quotation from the book of Genesis.

Crossed the portal, the penumbra of the narthex wraps the faithful; the presence of the baptismal font is a luminous womb to be reborn from water and Spirit. Finally, the catechumen will have in front of him the culmination of his initiatory journey: the altar surmounted by the glorious crucifix. The ambo stands out to the south, narrating the parable of the sower; the seat, to the north, with its position, makes the presbyter a listener, a teacher and a servant of truth.

The liturgical action comes to life from the very gestures of Christ in an inseparable interweaving with the architectural space and with the figurative narrative: the rite, in its symbolic plot is made vital by space, colors and images. The final goal, the Heavenly Jerusalem, is imagined as a place of gold, shining with the glory of God.

Images are courtesy of RABATANALAB 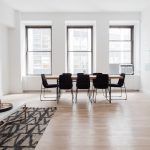 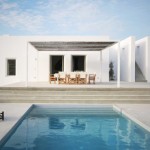