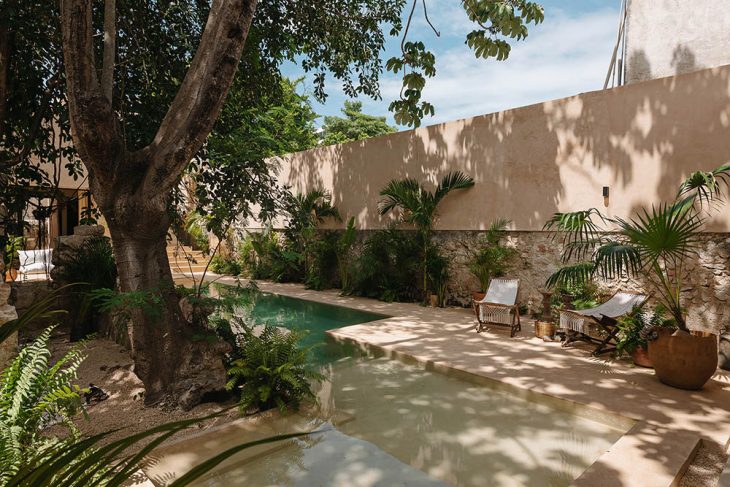 Workshop architects recently completed their latest project in the historic downtown of Merida, Mexico – Casa Huolpoch. The architects strive to respect and rescue the historical values of Yucatecan colonial architecture by combining them with contemporary details and volumes, as well as the comforts of modern life, in a reinterpretative, pure, and sober manner, creating different atmospheres to relax and enjoy the outdoors in the warm peninsular climate. Discover more after the jump. 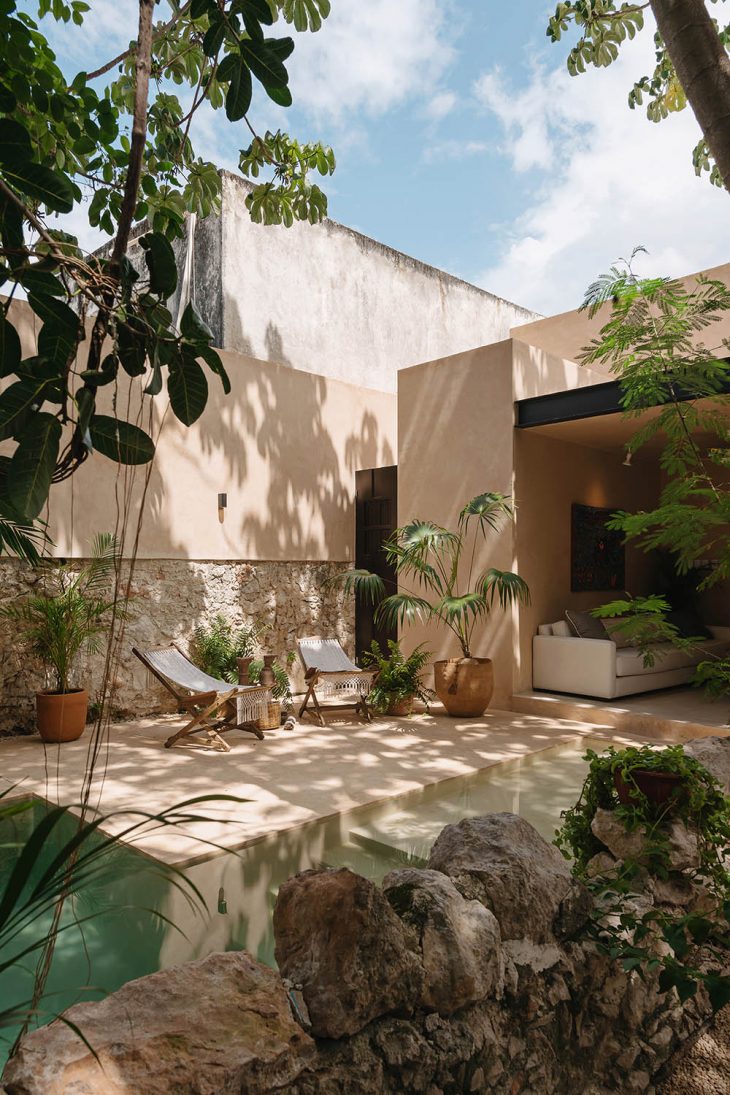 From the architects: Casa Houlpoch is an old Yucatecan house from the end of the last century that gets its name from a snake from the region that regularly “visited” the property’s ruins.

Behind its colonial facade, this house accommodates four bedrooms and a studio apartment, with a total of 315 square meters of construction.

Upon entering the hall, we are welcomed by an old cast iron lamp (very common to observe in the nineteenth-century houses of the city) that hangs from the original metal beams that together with the white wooden beams embellish the high ceilings of the residence. 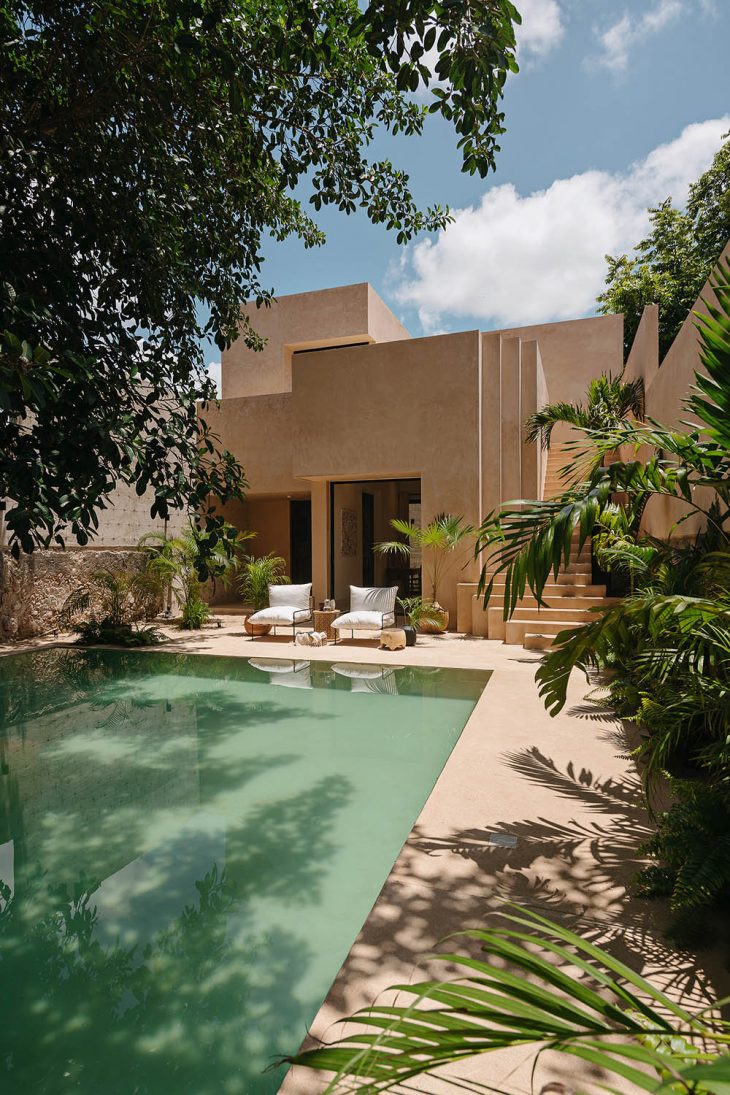 The Livingroom, in pastel tones, has modern and casual furniture by Artesano, integrating greenery and pieces of art from Galería Urbana Blanquis, such as a playful Timoteo on the center table and a painting by Pedro Friedeberg above the sofa, crowning the space.

The gray pasta tile “carpet” is surrounded by an antique white floor border that joins the kitchen and dining room through three old colonial doors that were reused, as they were found, preserving their character and its historical value. 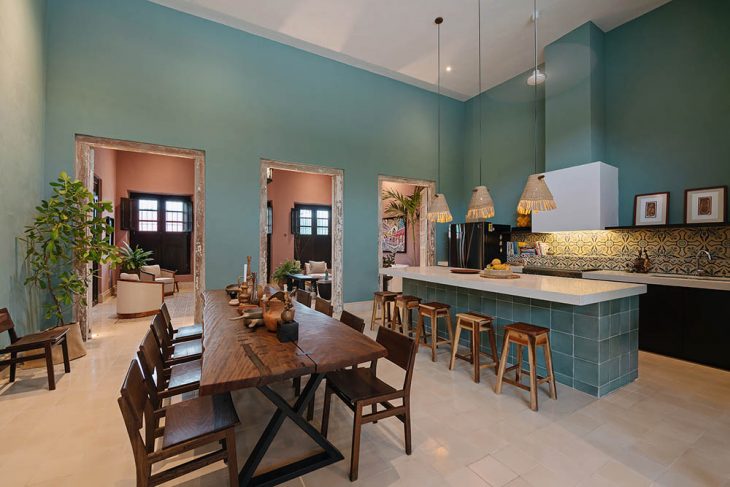 The kitchen, with finishings in pasta tile and white quartz, has a reinterpretation of the old Yucatecan hoods above the stove. The pendant lamps, by Axoque Studio, harmonize the space and integrate themselves into the wooden furniture such as the tzalam benches and the dining room table, which were brought from Mozambique, a country where the Dutch owners lived before settling in the Yucatan peninsula.

The dining room is connected to the terrace through a sliding glass door, generating a feeling of spaciousness and clarity where the visuals escape to the exterior. It is in this space where through decoration and furniture, the three cultures with which the owners identify themselves converge, the table, its centerpiece, and the drum, were brought from Mozambique, as well as the patterns on fabric that covers two Utrecht chairs by Dutch designer and architect Gerrit Rietvelt. On the sofa rests a painting by the Mexican artist Fernando Andriacci and on the opposite side a cow’s head adorned with beads of Huichol art stands out as a decorative element just above a traditional Dutch bicycle with the colors of the Prinsenvlag. 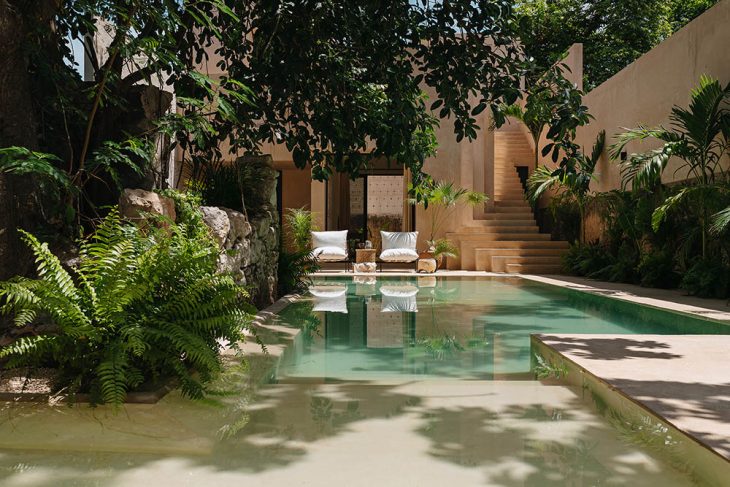 In the central courtyard, a chukum pool surrounds the stone remains of an old colonial structure where a large tree generates a spectacular play of light and shadow with its frond, creating the perfect atmosphere to host an outdoor kitchen.

The public and private parts of the house are symbolically connected by the perimeter fence that plays with two different textures, on one hand, we have the original stone brickwork in the lower part, and in the upper part a new wall finished with chukum, linking the past with the present. 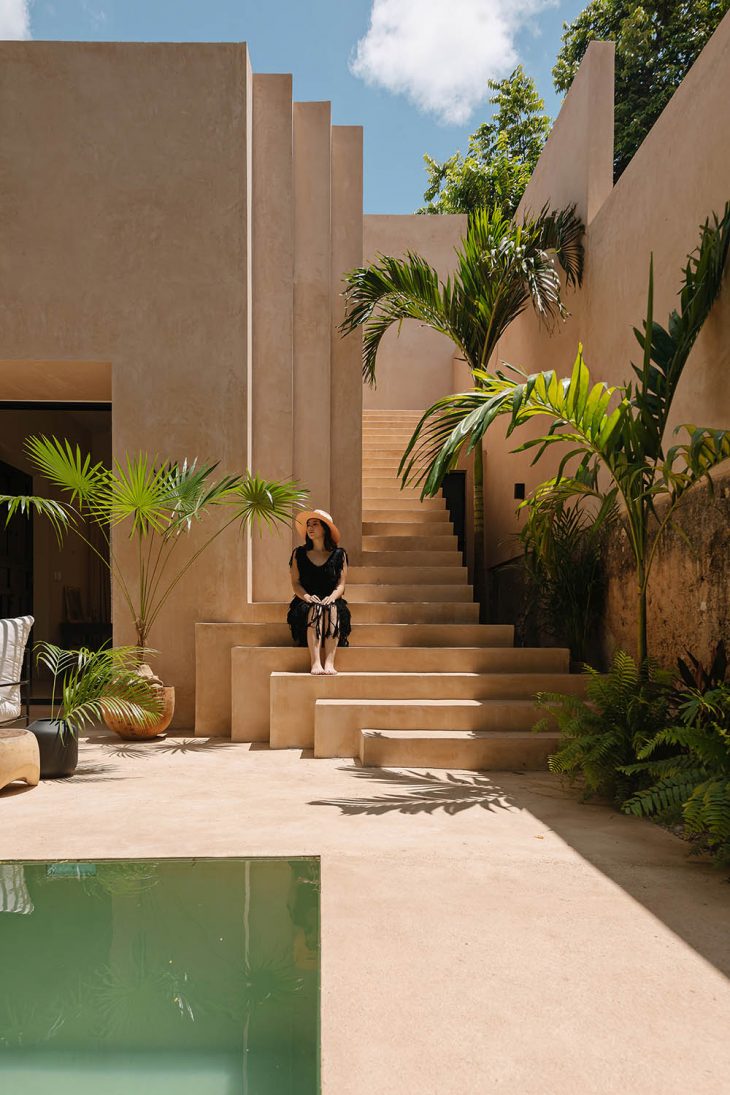 The volumetry of the back of the property reads as a totally disruptive design from the historical part of the residence where the steps to the second level (where two rooms and a terrace are located) serve as a visual axis and as a sculptural element, becoming the hallmark of its architecture for its dynamism.

The “meandering” with which the Casa Houlpoch stairs begin takes as inspiration the millenary staircase of the ancient temple of Kukulkán (Feathered Serpent and god in Mayan mythology) in Chichén Itzá, where at each equinox it can be observed as the deity (formed due to the effects of the light and the shadow that is generated), descends from the upper part of the temple. 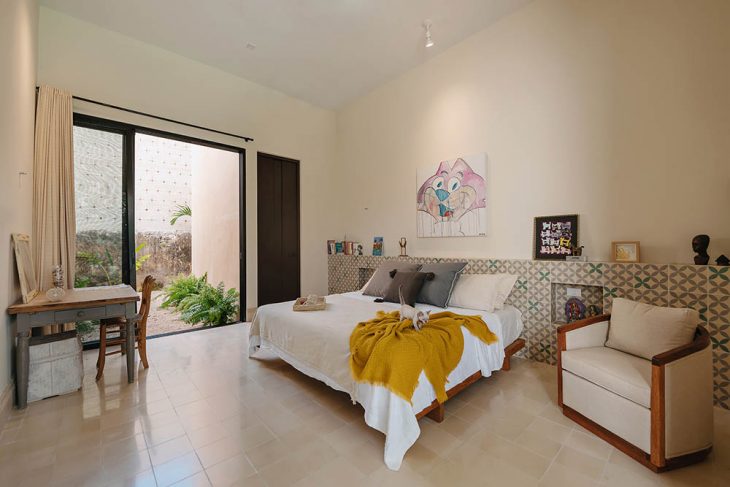 With a much simpler design, the master bedroom on the first level has a headboard made of pasta tiles on which a Neon Caron painting rests. The views from the bed, escape to the exterior thanks to the use of sliding glass doors at two opposite ends of the space, the first with a view of an interior garden and the second with a view of the pool.

At Casa Houlpoch we seek to respect and rescue the historical values of Yucatecan colonial architecture, combining them with contemporary details and volumes; and with the comforts of today’s life, in a reinterpretative, pure and sober way, creating different atmospheres to relax and to enjoy the outdoors in the warm peninsular climate. 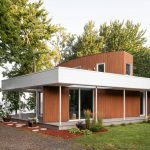 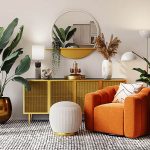