Degli Esposti Architetti have recently completed their latest residential project in Milan, Italy – Casa Selene. The building consists of a wing that completes the block’s perimeter wall on Viale Umbria and an orthogonal wing that extends in depth towards the block’s center, with the last of the three stairwells extending the height of the building’s eleven above-ground floors. Take a look at the complete story after the jump.

From the architects: The building is composed of a wing that completes the block’s perimeter wall on Viale Umbria and an orthogonal wing that extends in depth towards the center of the block, with the last of the three stairwells extending the height of the building’s eleven above-ground floors: from the morpho-typological standpoint, the building is therefore a hybrid between a block’s perimeter wall type, a slab type, and a tower type. From the large double-height lobby on the street, there is access to a portico that provides direct access to all the stairwells and underground parking areas, accessible via independent staircases. This planivolumetric composition establishes three main façades: the one on the Viale facing west and two other façades facing south and north, clearly visible from the street through two large portals: the pedestrian one five floors up through which a glimpse of the south façade is visible and the vehicular one two floors up through which the north façade is visible.

The syntax of the project is based on a composition of the façade using asymmetrical overhangs: the façade on the Viale has four one-story-high bow windows (plus an additional body, similar to the previous ones, in the form of a loggia), while the south façade has two protruding loggias four stories high. A façade design with asymmetrical protrusions has various precedents in Milan, such as the Casa Astratta by Perogalli and Mariani (1951-52), also a curtain wall or, in terms of parallel structures, the residences by Gigi Cacciaon Via Nievo 28/a (1955-57) and by the Latis brothers on Via Rossetti (1959-60), especially the rear façade. In all these cases, the modest protrusions (bow windows) exemplify a dynamic and asymmetrical composition of the façades. In our project, the design of the south façade is not limited to the arrangement of the multi-story protrusions; there are also lightweight metal structures (60-mm square sections) that group the balconies together, increasing their height from the ground to the top level: a single balcony on the first floor, then two grouped levels (floors 2-3), three grouped levels (floors 4-6), and finally four levels (from floor 7 to the penthouse). The north façade has a different design: on this side, there are long continuous balconies, another typical element of Milanese residential architecture, with numerous examples such as the Casa ai Giardini d’Ercole by Gardella, Castelli Ferrieri and Menghi (1949-55) and the contiguous internal body of the Melzi Pertusati complex, designed by Minoletti (1955-59).In our project, however, the linguistic treatment of these balconies introduces certain differences: on the first two levels of the balcony, it is enclosed by walls that configure it into a loggia; on the upper floors, the balconies are partitioned by the same thin metal frames that appear on the other façades. The arrangement of the pillars of this thin diaphragm, mindful of similar uses in the Latis building on Via Lanzone (façade on Via Ghisleri) (1949-51) and above all in the buildings of Guglielmo Mozzoni (Via Fatebenefratelli, Via Corridoni), is in our case designed on the north façade in a slowed perspective (prospettiva rallentata), with incremental modules.

The perimeter walls are finished in white plaster, with travertine stone cladding on the pilasters of the entrance lobby on the street, the building portico on the ground floor, and the building’s protruding elements on the upper floors of the south façade. The frames of the bow windows on the façade on Viale Umbria are covered in gold-colored alloy metal sheets. Parapets with metal rods and frames are painted white; the planters integrated into the parapets will enable the façade to have climbing vegetation, which can extend by clinging to the metal frames. 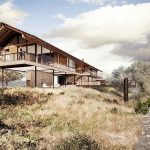 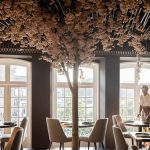