GRUPO Studio designed this stunning private residence in Villa Allende, Córdoba, Argentina. The house is developed around a grid of full and empty spaces. The empty spaces act as interior courtyards which combined with transparent glass or opaque planes generates great amplitude and connection with the outside. Discover more after the jump.

From the architects: Casa SI it’s the house project for my own family, where now we live along with Ine and our daughter Max.

Developing this project required a profound introspection and multiple project versions until the one that satisfied all expectations as future inhabitant and as an architect was found. The most important are self-identity, simplicity, efficiency, reduced program and footage and connection with nature.

The house is located in a 1500 sqm terrain in Villa Allende, a little city in the outskirts of Córdoba. The surrounding is characterized by single family houses in large plots with a strong presence of nature.

The project is developed starting by a grid of full and empty spaces. The empty spaces act as interior courtyards which combined with transparent glass or opaque planes generates great amplitude and connection with the outside.

Despite the house doesn’t count with a large covered surface a sensation of amplitude and expansion towards the outside is generated while living the home. Every space has, as minimum, a window from floor to ceiling and full space width.

An important premise was to lo close the façade to the street and open the one to back garden, along with this attitude we proposed an almost blind concrete wall lifted from the ground towards the street giving the house a unique identity in the neighborhood.

Regarding the material of the house, concrete is the main choice. We chose it because of it expression, nobility and low maintenance and aim to see how it transforms during time with the growth of ivy plants.

We also proposed to develop a timeless house, where protagonisim is in the simplicity and austerity that reigns so the house is free to fill with special moments.

Above all things, Casa SI (Casa Santi e Ine), is the scenery for the construction of the life we dreamt of. 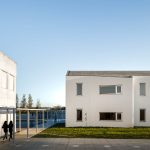 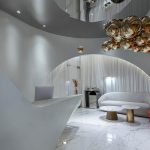