Atrium 01
1. Reallocation of the territories

The project is directed on the establishing of a new residential area and the creation of new economic nodes in the territorial structure of Japan. The whole residential function shall be carried out of the bounds of modern cities and it shall be concentrated along the coastline. It is suggested to relieve the overcrowded cities in Japan in such way, concentrating in it only economical and social function (enterprises, companies, state. institutions). Thereby a new functional area is forming.

– Economic Zone: (a city in a modern context), infrastructure and government buildings will be left untouched
– Residential function will be taken outside the cities.
– Economic (“agrarian”) zone will be located between the two previous zones (orchards, gardens, greenhouses). Earthquake and arise due tsunami – a centuries-old problem in Japan. The height of waves produced by an earthquake sometimes had reached 50 meters (in year 2011 – 10 meters).This problem is especially urgent for Japan, because country is situated in a seismically active zone. It is proposed to create a single “sheet” of the planned skyscrapers across the shoreline at a distance of 2-3 km from the shore, which will serve as a protective function for the whole island. Skyscrapers themselves are connected by a system of breakwaters and drainage channels, able to withstand waves up to 50 meters that prevent the destructive waves to reach the shoreline. Obvious is the fact that changes occurring to the planet today, eventually will acquire disastrous scale for human. A person may not prevent or affect these changes. But a person can accommodate to life in a permanently changing climate. In our opinion modern design should be aimed at building safe structures, bearing a protective function in the first place. As in the Middle Ages people were hiding from the enemy by the defensive wall, now the skyscraper serves as a defensive shield, but this time from the destructive forces of nature. The system of skyscrapers is connected with each other and it is located at a distance of 2-3 kilometers from the coast. The skyscraper is divided into three main functions: It was decided to use the energy of the tides in the design of such facilities. The system of underwater routers situated along the perimeter of the building in-between breakwater corridors, where because of an artificially flow increases the velocity of the water masses. The building also has an autonomous supply of drinking water (boreholes) and the system of the ground floors with live fish tanks and warehouses storing food for the inhabitants of a skyscraper (a system of bunkers). 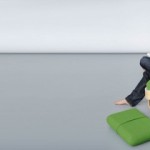 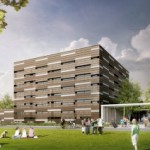