You are building your dream home. All of the funding has been approved, you are about to close on your home and you are excited. You are probably already picturing holidays around the dining room table, and debating whether you should install hardwood floors in your bedroom. The last thing on your mind is pests like rodents, termites, ants and roaches invading your home. However, that is one of the things that you should be thinking about.

Whether they are quietly marching in single file into your home, or eating away at the framework and foundation of your home, there are a few things that you need to know about these critters. If you do not properly prepare your home against an invasion, you may be finding yourself making an urgent phone call to a company providing pest control near Huntersville NC sooner than you expected. There are many ways to kill termites with DIY methods, however, if you don’t feel comfortable doing it yourself you should call in a professional. The following will provide you with a sneak peek into the pest world. Be ready to learn about the good guys and the less than desirable guys. The pests that provide a necessary contribution to the world and the destructive creatures that will literally eat you out of a house and home (termites). So, get ready for a quick lesson in entomology (the study of insects), and find out ways you can keep these creepy, crawly pests out of your home.

Some Bugs and Insects are Beneficial

Are you aware that bugs are just one subset of insect? Bees, moths, butterflies and beetles are another type of insect. Although almost every insect is crawly, not all of them should be considered creepy. There are a variety of insects that play very essential roles in keeping our ecosystem, as we know it, intact.

One such helpful insect are bees. The primary job of bees is to keep plants pollinated. Pollination is necessary for plants and trees to mature. Bees have the ability to see through UV light, and this helps them to instantly see the middle of flowers.

There are some who think that ladybugs are cute. As one of the least threatening members of the insect world, ladybugs are always on the lookout for their next meal. These insects enjoy eating aphids. Left unchecked, aphids can destroy plants and gardens.

Hawkmoths are another group of insects that pollinate plants. They can also hover like hummingbirds when they are feeding. An interesting fact about hawkmoths is that their tongues are longer than the width of their bodies.

Finally, insects are meals for other animals. As a very critical part of the food chain, birds, fish, lizards, skunks, frogs and raccoon will make a quick meal out of insects.

The first thing that you will need to understand is there are no bad insects. The problem occurs when insects are moved, voluntarily or involuntarily, into an ecosystem they are not native to. This is when insects can begin to create huge headaches for homeowners and the local ecosystem. When an insect begins to harm a new ecosystem, it becomes known as an invasive insect. It is not unheard of for insects that are native to continents like Africa to make their way to the United States.

However, an insect does not have to be native from another continent to cause an undesired impact. For example, insects that are native to the southern part of the United States can cause trouble if they migrate to northern states. The same can be said of insects native to the US. They can cause destruction and harm if they are introduced into another ecosystem.

Unfortunately, many of these invasive insects do not arrive in a new location of their own doing. With the ease of traveling in modern society, these insects can hitch a ride during the shipment of food, through human travel and through the shipment of other goods like live plants.

So, what is it exactly that makes an invasive insect dangerous and harmful? In their natural habitat, these insects had to stay on guard to avoid being eaten by their natural predators or dying off due to illness or weather conditions. These are some factors that help to keep the insect population low, even in the United States. However, once they are in their new ecosystem, there are fewer threats so they can reproduce quickly and cause widespread damage.

These non-native insects also begin to compete with native insects for space and food. Small insects can cause a large amount of trouble. There are currently several species of invasive insects in the United States, but there are some that have become infamous for creating a lot of trouble wherever they go. One of the oldest invasive species in the United States is the Gypsy Moth. The Gypsy Moth is native to Europe, but was brought to America purposely in the 1800s. The people who brought them to the new land were hopeful that the moths would be able to create silk. They did not create silk, but they did escape.

After gaining their freedom, the moths managed to eat every leaf that was in their path. Over the last hundred years, the moths have migrated to every corner of the country, and they are simply munching away on the leaves of every tree they encounter.

So, do you want the good news or the bad news first about these moths? The bad news is that they can cause an extreme amount of damage within 10 years of going into another location. The good news is that after 20 years, a forest can recover from an invasion of Gypsy moths. This is great news if your garden or green canopy has already been destroyed.

Next on the list is the Redbay Ambrosia Beetle. Native to Asia, this beetle has made the list of troublemakers because it carries with it a secret weapon. Although it is no bigger than a grain of rice, it carries fungus. When it bores into the trunks of trees to create a nest for its eggs, it leaves the fungus behind for the baby beetles to eat after they have hatched. The beetle will only use a tree from the laurel family for its nest, and unfortunately for the tree, the fungus spreads throughout the entire tree. As a result, the tree develops laurel wilt. This is a deadly disease that rots the tree from the inside out.

This beetle was first spotted in the southern part of the country in 2002. Since then, Georgia, Florida, South Carolina and Mississippi have all reported sightings and tree destruction courtesy of the beetle.

Also from Asia, the Starry Sky Beetle wins the award for the largest antenna in the insect world. The antenna is longer than the body! Although the speckles may remind you of the night sky, this is one beetle you do not want to be wishing on stars with. These beetles have been spotted in New York, New Jersey and Ohio. They have the potential to cause widespread damage to the maple trees in New England, and this will affect the production of maple syrup. Once the beetle has burrowed itself into the trunk of the tree, the tree dies. This beetle is also able to lay over 160 eggs during its lifespan.

How Can You Make a Difference?

Did you know that invasive species are not only found in the forests? They can also be found in farms, homes, mountains, ponds, rivers and even major cities. There are things that you can do to join in the fight against invasive species. You should try to learn everything you can about the invasive species that have been discovered in your area. Regularly inspect trees, grass and the gardens you have in your yard. If you notice signs of non-native insects, immediately report them to a reputable pest control company.

Avoid releasing exotic plants and/or animals into the wild. If you have an exotic pet that you no longer want, contact your local animal control office. Just like non-native insects, these exotic plants and animals can become invasive once they have entered into a new area.

If you use firewood, only purchase local firewood. Insects can hide in pieces of wood for extended periods of time without being detected. Firewood from other areas should be thoroughly inspected for invasive spiders, beetles and other insects.

Another way you can reduce the introduction of invasive insects into your home is to buy local produce. There have been a few reports about consumers finding large insects or insect eggs hidden in their fruits and vegetables.

You can also make sure that all cracks and crevices are sealed in your home, and there are no obvious points of entry into your home. Do not leave basins, tubs or old tires filled with water because many insects will use them as breeding grounds.

You may never come into contact with any invasive insects. However, if you notice signs of nesting or infestation, do not hesitate to contact your local pest control company.

Images from: Home in Reigate by Vita Architecture 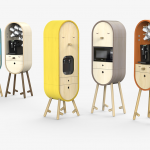 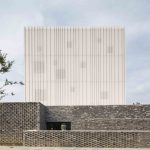