Brusnika Design recently completed their latest residential project in Surgut – Hudson. The project team aimed at emulating features of Northern American architecture in the building while preserving authenticity in the context of a Northern Russian city. Take a look at the complete story after the jump.

From the architects: Hudson is a residential house in Surgut, featuring modern American traditionalism. Located next to the municipal park, in the area between the city centre and an industrial estate, it lies in the part of the city with typical brick and prefab houses dating from the 1990s and 2000s.

Hudson was designed by Brusnika Design. The project team aimed at emulating features of Northern American architecture in the building while preserving authenticity in the context of a Northern Russian city.

The house is conceived as a perimeter-confined quarter comprising  several residential blocks with varying numbers of storeys. Two 17-storey sections are united to make one, located in the northern part of the plot with two 9-storey towers right behind them. Low 3-storey sections fill in the gaps between the high-rise blocks closing the perimeter of the quarter. The height of the building increases from the centre to the periphery. The complex modular facade composition gradually comes into view as one approaches the building and walks through its central arch. Due to this design, the windows and private terraces overlook the neighbouring park, while the courtyard area is south-oriented to maximise natural solar gain for the apartments.

The composition emphasises the idea of the building’s introversion ー it is shaped around the inner courtyard. Two arches in different parts of the courtyard create a marked axis of symmetry, which blends Hudson’s inner space into the surrounding cityscape. The outer perimeter of the house accommodates various retailing premises catering for its residents and neighbours. The courtyard is half-private in function, turning into a lobby for guests, and offering public access to the zone with playgrounds and sports complexes.

The street facades can be subdivided into three areas: the basement, made up of the first two storeys, the middle part and the top section. The foundation is clad with horizontally rusticated natural stone, which brings in structural clarity. The middle part, or the house body, balances two materials ー brick finishing and metal panelling between the windows. The rhythm of contrasting vertical elements, namely metal framed window apertures, enhances symmetrical composition and facade austerity. The top section of the house, consisting of two to four upper storeys, conveys active plasticity due to its cascades and stylish cornices made of architectural concrete. The dynamic use of terraces, comprising those on the top house corners, balances out the building and creates its distinct silhouette. The combination of four materials — brick, stone, metal and architectural concrete — intensifies the inner dialogue of architectural elements and forms the complex facade composition.

The grid of windows of varying dimensions enhances the facade rhythm. Three window sizes are used in the project ranging from 1 to 3 metres in height. The largest 3-metre windows are fitted in the kitchen ー living room areas, where families spend more time. 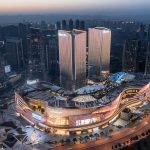 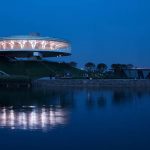