KCAP have recently completed works on their latest residential project – The Twins . The design comprises of two strong volumes arranged around a shared courtyard garden. Stepped green balconies, along with robust materialization and luxurious detailing, create a sensory-rich ensemble that seems like a three-dimensional refuge in the heart of Amsterdam.

The Twins is part of the reconstruction of the former Shell site in Amsterdam-Noord into a new neighborhood for living, studying, and working known as ‘An het IJ.’ The ensemble is situated on two L-shaped plots in the center of the larger space. It was critical that the structures be on the same scale as their surroundings. The prominent site, on the other hand, demanded a bold architectural statement.

Rather than developing two separate buildings, KCAP chose to pair the volumes and bring them together, both architecturally and conceptually. The floorplans of both ‘twins’ are L-shaped and broaden at the angle. Furthermore, the volumes spread towards the ground level and taper off at the top, allowing for the creation of vides in the interior and resulting in the structures’ distinctly stepped form.

“The buildings have been carefully ‘split’ around the courtyard garden, and interact with each other as they are neatly stacked. Such a set-up also allows for contact between the residents. Because in designing The Twins, we wanted to create more than just housing. We wanted to create a community,”

The entrances are set back from the front yet are transparent and entirely covered in gold anodized aluminum, bringing light upwards naturally. The golden glow, the warmly lit halls, and the light from above guarantee that the internal world appears spacious and alive from the outside. The golden wall paneling spans the entire ground floor, and color-coordinated city numbers and doorbells add to the luxury.

The space between the two volumes is an important component of the design. Buro Sant en Co created the communal courtyard area, which is flanked by stepped, stacked balconies. These staggered outdoor spaces not only provide ideal sunlight and solitude, but each individual balcony is also encased with vertically planted balcony walls. These together form a continuous green facade. This, in conjunction with the courtyard garden, produces a lush, valley-like green inner world that is unique to The Twins.

The green walls, on the other hand, are more than just a natural feature: by extending the courtyard garden upwards, the sense that both buildings belong together is enhanced. Because the green facades can be seen from the street, they form an eye-catching and inviting gesture. At the same time, this particular configuration provides some privacy. The courtyard garden is accessible to anyone, but its vertical continuity integrates it with the nearby housing. The space clearly belongs to the residents, and it contributes to The Twins’ sense of community.

“We deliberately chose to design two volumes that make one single statement. The Twins belong together, one cannot exist without the other – just like real twins. Twins also tend to look alike on first sight, but when you get to know them better you can see their subtle differences – and the same applies to these buildings,”

OCO (Ontwikkelcombinatie Overhoeks, Amvest) commissioned the design of the two volumes, which total 149 apartments . The Twins provided Amsterdam with a one-of-a-kind green residential complex, a sanctuary in the midst of the city’s bustle. 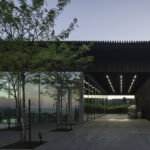 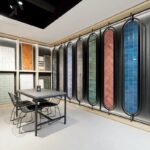