Santiago Viale and Associates designed this stunning private residence in Cordoba, Argentina. The house is surrounded by a dense tree canopy, so it was important to identify any open spaces that might be used to set up the social areas of the home. To the north, a rectangular prism of private spaces was placed, and both were connected by a circulation system that encircled the main courtyard. In order to have the least amount of impact on the environment, these design sought to preserve all of the trees that were present on the site.

All of the home’s private spaces are located in a north-facing block with a concrete eaves that lets in plenty of winter sunshine but none in the summer.

A brick screening was suggested on the street-facing front before the garages, which together form a filter that is conformed by a material and programmatic proposal to block the harsh afternoon sunshine.

Skylights were suggested for a number of places. They not only function as a component that brings natural light indoors, lowering energy usage, but they also add personality to the architectural language used for both the inside and outside of the buildings.

I have always related sustainability to common sense, to fair judgment. That is why I believe that sometimes with extremely simple actions it is possible to be sustainable, avoiding therefore the use of astonishing devices or needless accessories.

The site on which the house unfolds is located in a neighborhood which, before becoming one, had belonged to the area determined as green belt of the city of Córdoba. This means that the general situation of the plots on this area was of flat and exempt terrains, without much vegetation. However, this particular site presented a profuse tree vegetation in the building area, in addition to a 15 m tall palm tree, so that we could infer that this property would have belonged to the old house of the “quintero” (the owner of an extense agricultural plot).

The position of the trees practically made it impossible to build a house without being forced to remove them, so the need arises to survey all the species, including both the diameter of their trunk and the directions that they take going upwards as the first decision to start the project.

Priority was given to finding existing spaces between the trees where the program of the house could be developed. The lines of the building were drawn delimiting these possible spaces, appearing like this the three separate rooms that make up the social area of the house.
Towards north sits a rectangular box which contains the private area (bedrooms). All of these separate spaces were tied together through a circulation that gives form to a central courtyard, making this special place to have a large gallery/intermediate sensation as it is protected by a cover made up of the treetops.

Finally, towards the back of the lot, the slab was extended, generating a covered gallery that opens onto the rest of the property where a pool was located.

All these design operations had the objective of maintaining all the tree species found on the site in order to achieve the least impact on the environmental existing situation of the plot.
Thermal condition

The thermal condition was considered from the first idea of the work, being this where the effort to maintain the existing tree mass takes value above all, as it generates a first protection over the house, casting shade on the roof, acting as a sunshade device composed of several layers, thus becoming a resource that intermediates between the direct action of the sun or other atmospheric agents and the house, in addition to the spatial quality that generates.

On the other hand, a wall made up of 18 cm thick brick was used as an exterior envelope, to which a half plaster wall partition with glass wool between this two was added towards the interior of the house, thus achieving the desired thermal transmittance coefficient.

On the other hand, by generating the central courtyard, cross-circulation of winds is enabled, contributing to interior thermal condition.

All the private areas of the house were placed in a north-facing block, which has a concrete eaves that allows the entry of abundant sunlight in winter and none in summer.

On the facade facing the street, to the west, a brick screening was proposed before the garages, which together form a filter conformed by a material and programmatic proposal as a protection to the strong afternoon sunlight.

This house presents a variety of them, since I have always considered it valuable to learn from our architectural heritage, extracting from it this type of spaces due to the importance and timeless condition of the galleries and “patios” of our colonial architecture, which, especially in our region, work in a proven and efficient way in terms of the impact between exterior and interior.

Skylights were proposed in several spaces, which not only work as an element that incorporates natural light inside, reducing energy consumption; but they also lend character to the architectural language both outside and inside spaces.

The intention to maintain the existing plant species entails a direct relationship with the chosen construction system.

A structure supported on piles was proposed to avoid continuous foundations that could affect tree roots. These special piles consist of a 10 cm diameter hollow metal tube sunk on the earth, which subsequently is filled with a cement coating, totaling 20 cm in diameter.

This technology is common for submurations in existing constructions, so the machine that performs them does not exceed 2 meters in height. The tubes that conform the piles therefore are divided in sections of two meters which are linked as they are inserted into the ground.

Conventional piling systems would not have allowed us diameters of less than 45 cm, adding to the fact that the trucks that carry out these excavations also involved general pruning of all vegetation.
Another issue that was considered were the ground beams since, if we proposed the traditional solution of digging them out, the horizontal linking between them would generate cuts in the roots. So is why it was decided to place them on the surface, resting over the ground level, thus forming a concrete plinth which not only solves the structural issue with the tree roots, but also turns out to be part of the architectural language of the house.

A low and flat roof was proposed at the height where the treetops begin to unfold, with perimeter free fall slopes and a metallic drip edge, avoiding this way any other storm drainage system, since the amount of existing vegetation represents high risks of obstruction for them.

All this rainwater discharge is collected by a concrete perimeter channel at ground level which presents a slope leading the water to the street. This in turn is filled with gravel allowing the free runoff and correct traffic over it.

We are used to hearing about “intelligent architecture” or “intelligent buildings”, however, I prefer to talk about architecture with common sense, intelligence that arises from the mind of the designer.
Since knowledge and the correct use of all resources available, both natural and human, together with the architect’s common sense, should be enough to create spaces with identity, spaces that serve and excite its inhabitants. In conclusion, as its commonly said, architecture that does not excite, it is simply construction. 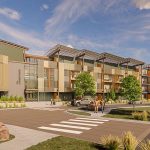 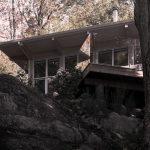