Gras have designed this luxurious residence situated in Santa Ponsa, Spain, in 2016. Take a look at the complete story after the jump. White concrete cantilevered slabs define a new tennis club in the middle of the nature that combines a social building together with tennis courts; a total of 17 courts of all surfaces: grass, clay and hard. A Master series facility.
The strong natural context defines the concept of the project. The topography of the land demands a terracing strategy in order to place the different courts at different levels following the slope of the hill; The building itself is therefore conceived as a continuation of that terracing: 2 floating terraces, white concrete slabs, overlooking the tennis compound.
By positioning the building at the highest point of the land, it works as the last terrace of the project and as a great viewpoint, balcony to the rest of the plot, specially to the Centre court, the heart of the project.
The Centre Court is the heart of the project. A series of terraces are carved in the hill to create a natural stone stadium, a sort of “XXI century Greek Epidaurus tennis theatre”. The “stadium” can seat up to 1500 spectators. The terraces are built with traditional stone masonry, using solid blocks of a Mallorcan natural stone called Mares. A natural scenario combining the stone and the natural grass is created following the context of the site.
The clubhouse is designed not just as a social building, also as a viewing platform to watch the tennis games at the Centre Court. The building leans out to the court in order to enjoy views from all floors. White exposed concrete slabs cantilevers are created to maximize those views.
A fully glazed ground floor welcomes the visitor with a lounge and a restaurant. The whole facade can be opened having a continuous space “in and out” so the user can enjoy the terraces, the gardens and the pool, always surrounded by the tennis courts. At the back of the lounge, the dressing rooms and service areas are located. An open steel staircase leads up to the first floor, an open plan multipurpose room with a balcony around the whole floor. Since the room can also be used as a gym, the balcony offers the possibility to install a jogging circuit around the building. A metallic mesh wraps the whole floor to protect the runners from falling. The balcony “enlarges” when facing Centre Court to create an extra wide terrace to seat spectators during the tournament. The full floor works as a terrace overlooking the surrounding tennis courts.
In connection with the deck utility of the project, the rooftop is also accessible and can be used by the general public, offering extensive views of all the courts and surroundings. 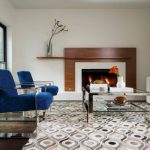 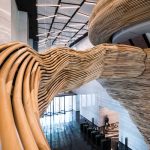