Kris Lin International Design【KLID】designed the Navigator Sales Center in Tianjin, China. The project consisted of  designing a modern Sales center  where the Tianjin Shipyard, a milestone in Chinese shipbuilding history, was situated.  Take a look at the complete story after the jump.

From the architects: The project is located in Tianjin near the sea. The original building is Tianjin Shipyard. The designer undertakes the overall design work including architectural, landscape, interior and FF&E design. Functions of the interior space are negotiation area and show area.

The original building is Tianjin Shipyard with history of one hundred years. It is the milestone in Chinese shipbuilding history and made great contribution to the navigation industry as industry leader of that time. For deep memory of history and respects to the original shipyard, we consider designing this project with the concept of navigator which means a large ship is sailing on the sea.

In the original architecture, mock-up and sales office are in two separate buildings. The designer connects the two separate buildings together through a corridor and make them a complete one. We outline the profile of the ship with flow lines and attach the LED light strip based on theprofile to present a large ship of modern times with future sense of science and technology. The designer also want to present a pure artistic work with artistic flowlines and a large ship intent with both modern art and historical rudiment. The design rebuilds the sole of the shipyard with flexible and elegant lines.

Navigator is a large ship sailing on the sea which is closely related to water. With the exterior waterscape, the artistic building looks like a large ship sailing on the sea from afar. LED light strips on the ship refract by the water and form perfect mirror image which adds dreamlike beauty to the space. Combination of architecture and landscape forms the waterscape of modern large ship of future science and technology.

In the interior space, there appears a simplified and modern profile. Profile with lines of strength create an atmosphere of tough cabin industry. The cloud profile on the ceiling makes people feel that they are under clear sky. Transparent glass brings the sunshine in which echoes with the large ship sailing in the sea, offering special experience and visual impact in both interior and exterior space.

By modern approach and with reference to the original building of the shipyard, the designer integrates architectural, landscape, interior and FF&E design together and forges a Noah’s Ark of modern times. This implies that in the future the project will lead development of the whole city as a navigator and become the leader of the current industry like the formal Tianjin Shipyard. Driven by the modern science and technology and keeping pace with the times, the project will be a navigator of the industry. 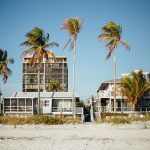