Busan has a specific geography: Mountains areas are connecting directly to the Pacific Ocean. With great nature, a high density of population and an urgent demand for public spaces to be used by the inhabitants.

The two new public spaces in the concept could get a new importance for the city of Busan:
One facing west to the mountain and city side reserved for public performances
One viewing east to the ocean side to celebrate “New Years Sunrise Festival”

In generally the reference to the history of Madang, a traditional open urban used for gathering, happenings and performances is the base for the design of it.

Connecting to the two places the two main functions of the Opera House (opera and theatre) are allocated to these plazas.

A thin skin, protecting from the sun and water connects the two buildings, leaving in between a pathway open for the public. This supports Busan’s natural flow from mountain to the ocean, creating a good harmony between urban space and architecture.

The new landmark of Busan’s Opera House reflects the natural and urban energies and connects it to the performing arts spaces of “Madangnoli”, at the Mountain Plaza and the Sunrise Plaza, an urban harmony with a folk performance played by ordinary people. It is changing night and day view by its specific atmosphere.

The Construction of the building is like a wave of sounds as an environmental friendly building reflecting Korea’s path to local sustainability. 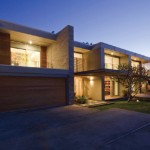 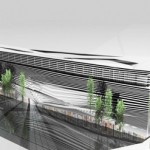