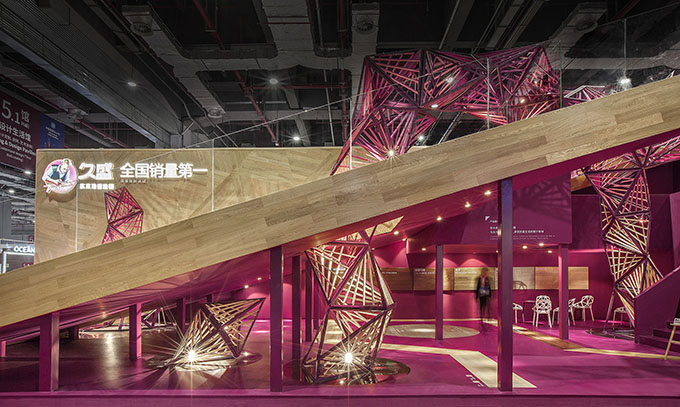 Towodesign created this stunning trade show booth for the flooring brand TREESSUN. The design team took the booth as “an architecture inside an architecture”, which has a three-dimensional facade, resembling a geometric sculpture. The overlapping and combination of blocks generates dramatic visual effects, and triggers visitors’ curiosity and the desire for exploration. Take a look at the complete story after the jump.

The core of Oriental garden aesthetics was extracted to be design languages, and the blocks were overlapped in a modern and simplistic manner. In this way, Towodesign broke the conventional attribute of the trade show booth as a container, and turned it into a garden-like artistic and futuristic space which recreated nature.

The design team took the booth as “an architecture inside an architecture”, which has a three-dimensional facade, resembling a geometric sculpture. The overlapping and combination of blocks generates dramatic visual effects, and triggers visitors’ curiosity and the desire for exploration. In most cases, an exhibition booth and its exhibits are relatively independent of each other. However, this project is an exception. The designers innovatively utilized exhibits (i.e. wooden floorboards) as the main materials to construct the booth, hence integrated the both into a whole.

Wooden floorboards cover large areas of the entire construction, with the warm texture well coordinating with the sharp structural lines. The construction’s front part is mainly composed of a vertical wall and a slope with natural wood tone. When looking from the side, visitors can see the interior space dominated by purple, which echoes the visual impression of TREESSUN’s logo and at the same time enhances the product display area’s sense of depth. The overall structure presents varying visual effects from different angles of view.

Following the aesthetics and wisdom of garden layout, Towodesign skillfully incorporated folding surfaces and undulating spatial rhythm into the commercial scene, which produced distinctive visiting experiences. Openings of different sizes were carved out of the wood-colored slope, through which a series of art installations were inserted. Those installations drew on the form and charm of various Chinese garden elements, such as covered bridge, rockery, and gate opening, etc.

Triangular structures are used as basic modular units, which are symbols connecting the “wooden garden” and the “purple garden”. The wooden installations are made of a great many pyramid-shaped components, to depict the image of Taihu stones which are widely seen in traditional Chinese gardens. Those artworks flexibly run through the spaces above and beneath the slope, which not only add playfulness to the design, but also guide the visiting route.
Philosophical consideration of spatial relationships

The open wooden slope divides the booth into two blocks (i.e. the “wooden garden” and the “purple garden”), and also extends the folding relationship between surfaces. The “wooden garden” on the upper area showcases the naturalness of TREESSUN’s floorboards, while the “purple garden” hidden beneath matches the brand’s logo. The two spaces are interpreted in different ways through using the same materials. It’s worth mentioning that the spatial relationship implies the Chinese philosophy of Yin-yang. The Taihu stone-shaped installations have distinct hues in the two gardens. They are purple as encountering the wood color and vice versa, which generates an ambience of coexistence. 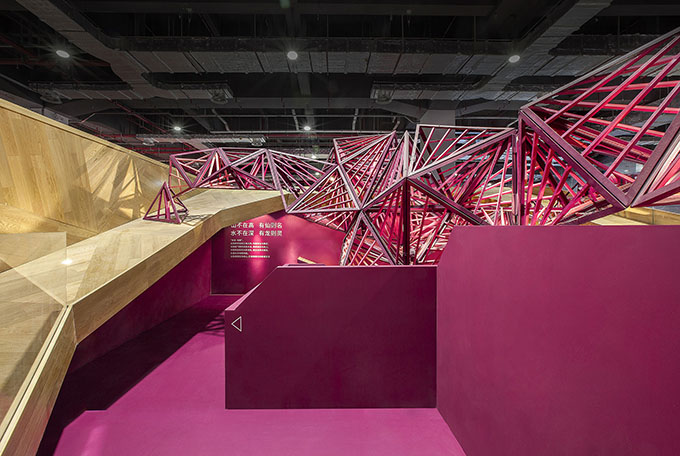 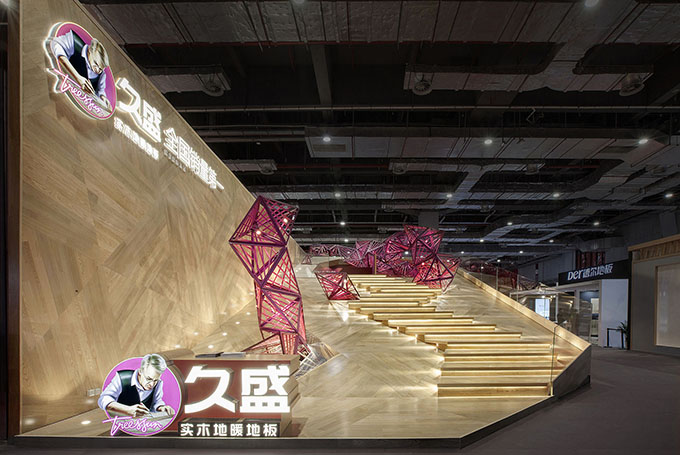 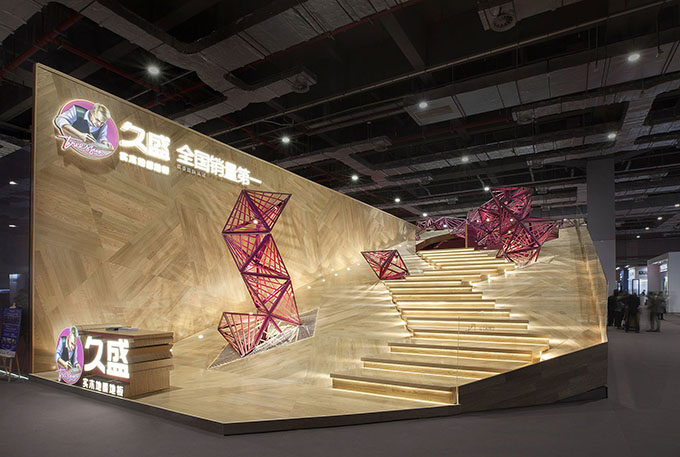 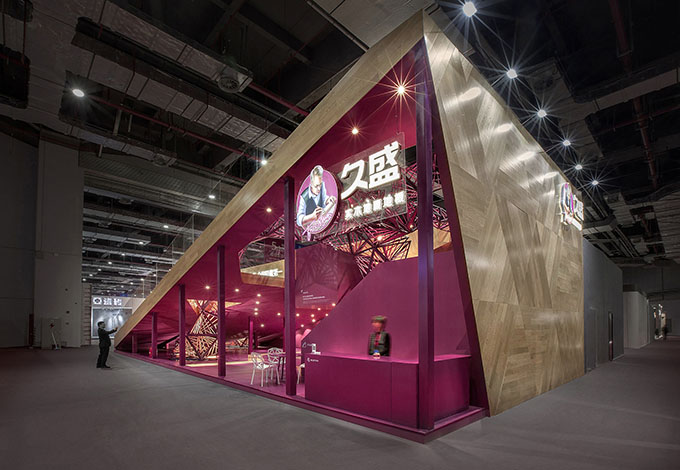 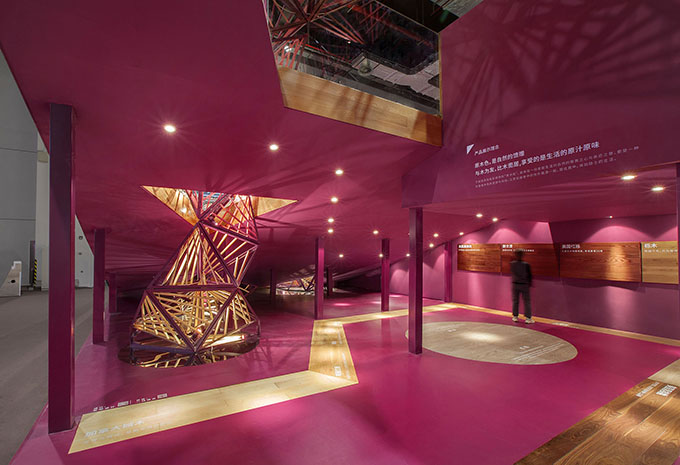 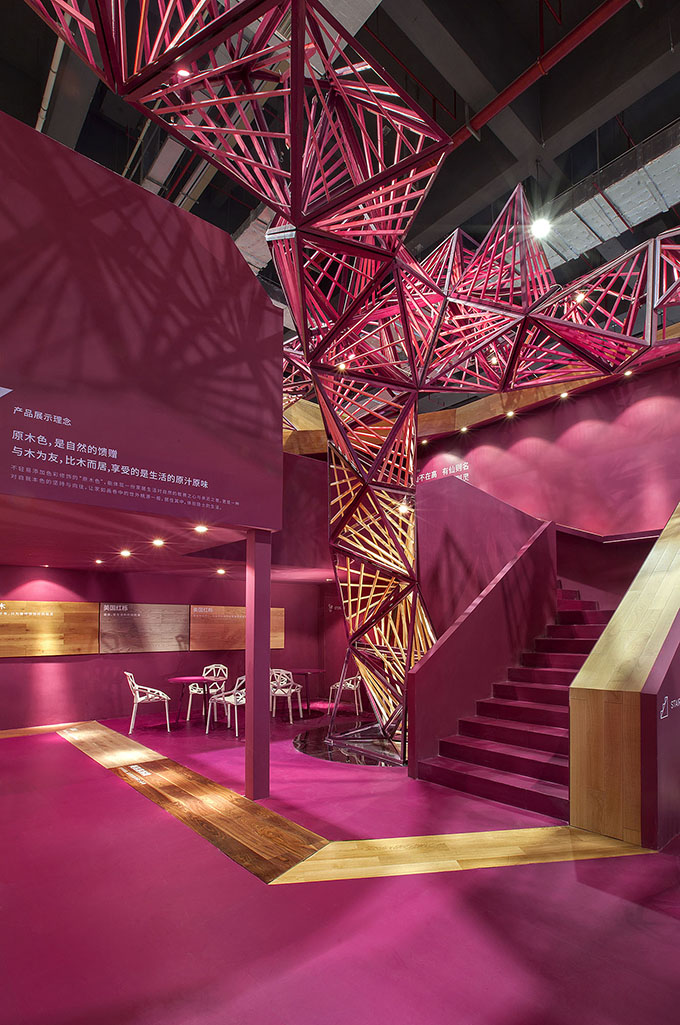 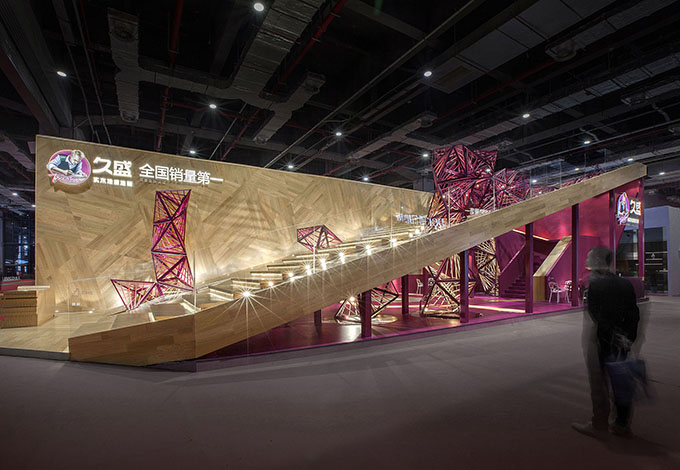 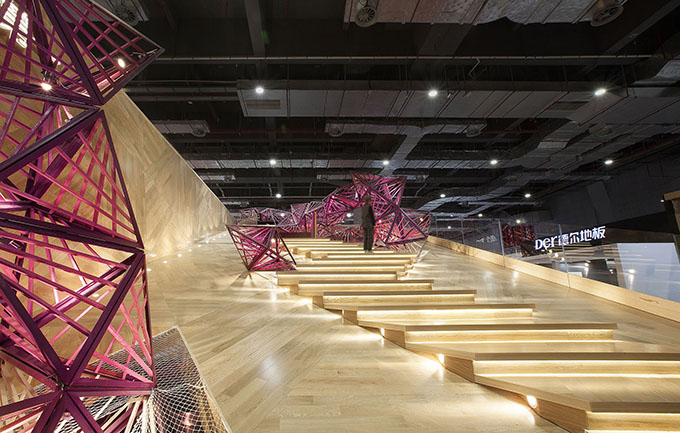 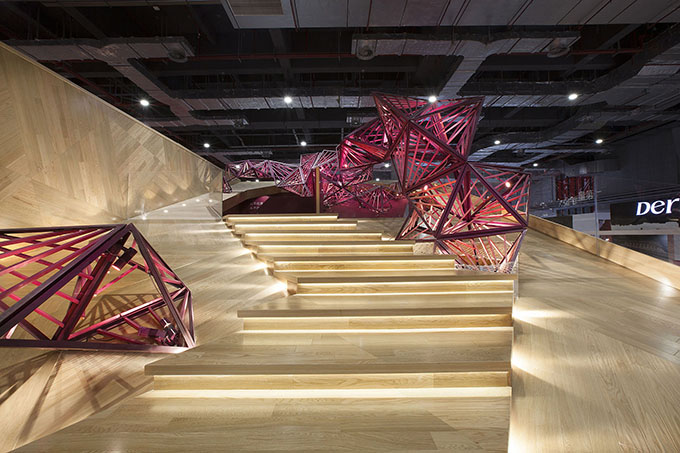 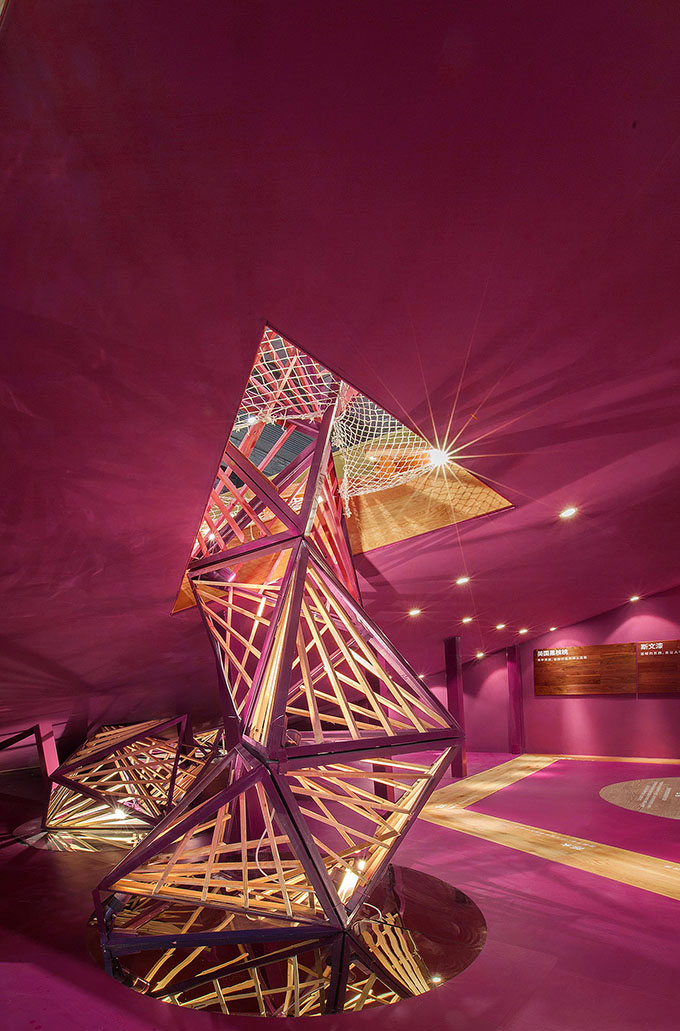 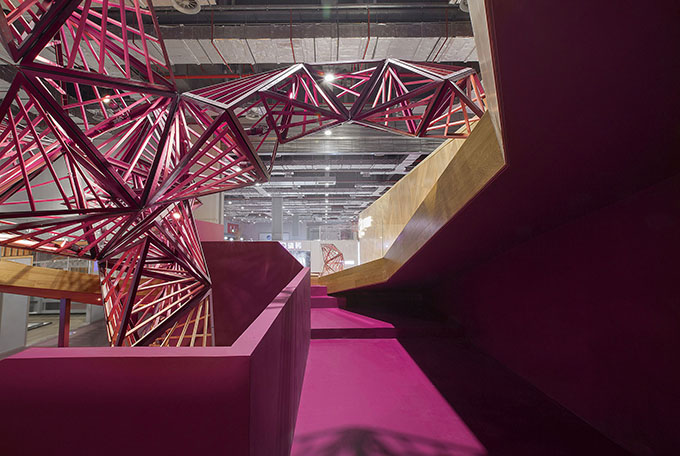 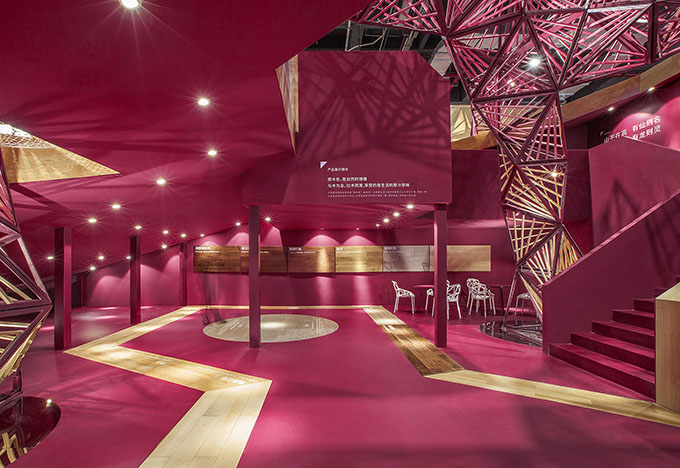 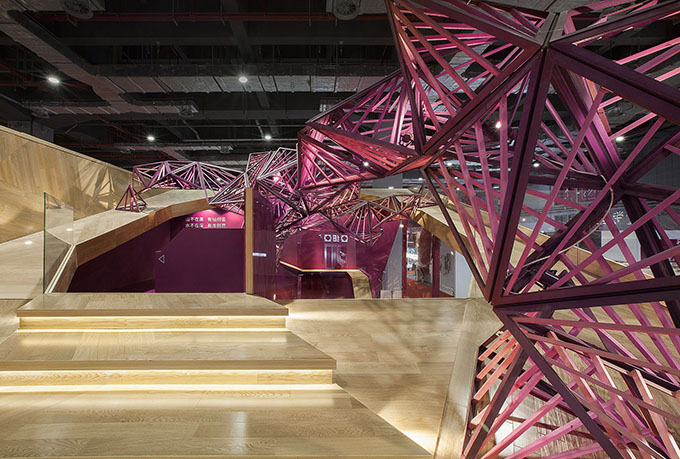 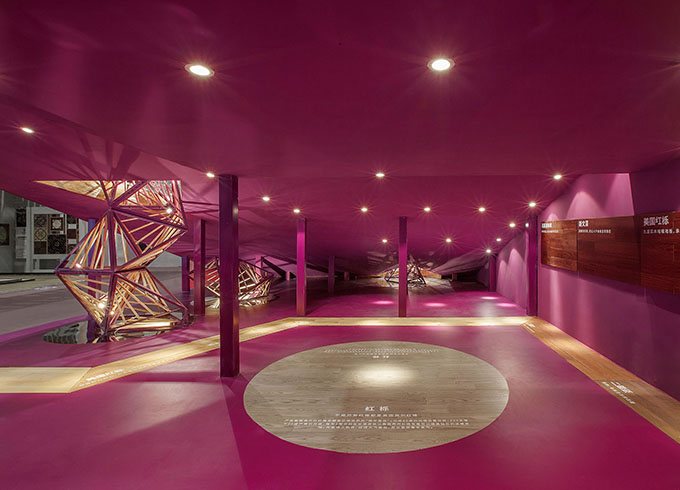 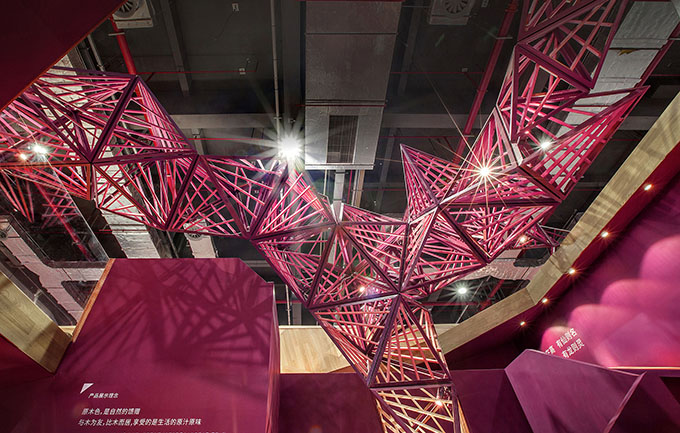 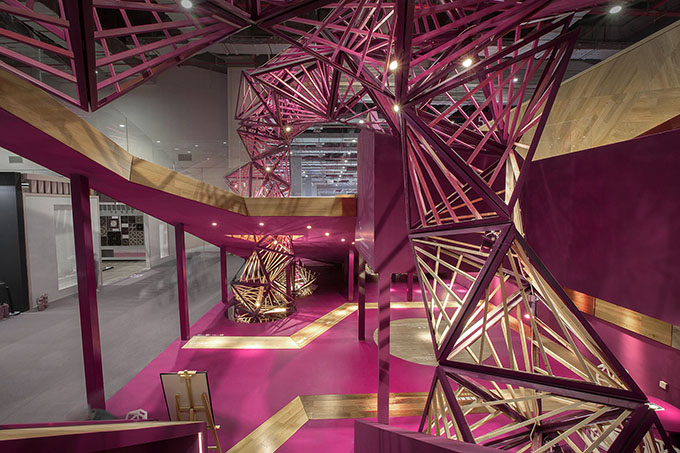 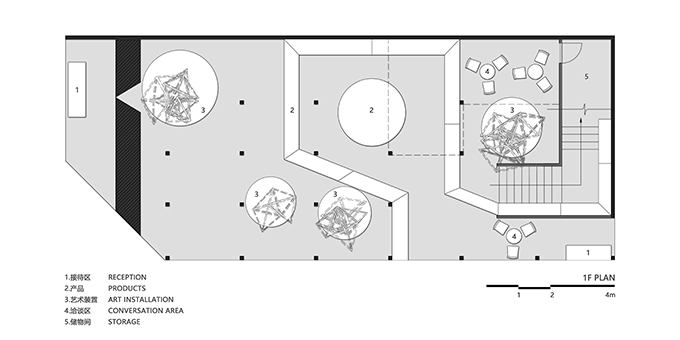 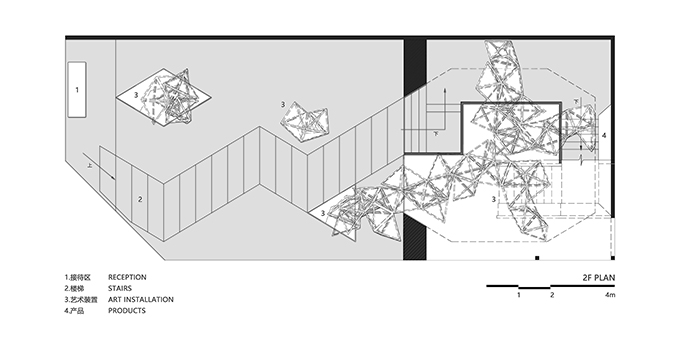 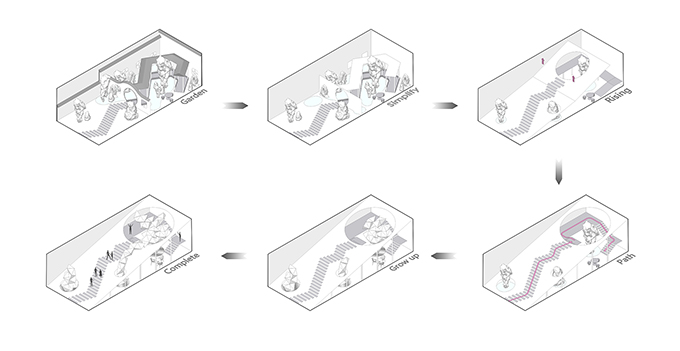 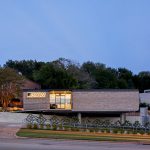