NADAAA architects propose a design for the Daniels Faculty of Architecture in Toronto, Ontario. The design of University of Toronto’s Daniels faculty of architecture, landscape and design (DFALD) building is conceived as a two-phased project aiming to both renovate and expand the iconic structure formerly known as KNOX college, transforming their existing building into a framework more relevant to their teachings and aspirations, while expanding into a flexible facility that can foster changes of pedagogy in the years to come. The design of University of Toronto’s Daniels faculty of architecture, landscape and design (DFALD) building is conceived as a two-phased project to both renovate and expand the iconic structure formerly known as KNOX college, transforming their existing building into a framework more relevant to their teachings and aspirations, while expanding into a flexible facility that can foster changes of pedagogy in the years to come. The master plan for this 19th century site was developed through the analysis of anticipated use patterns and site ecology, with an eye toward re-positioning the southwest corner of campus on-axis with lake Ontario, and creating a new identity for the faculty.  Spadina boulevard is currently anchored firmly on the south side by the KNOX college building, while its north side is characterized by a series of structures that are the result of haphazard additions over the past seventy years. This project promises the possibility of anchoring the southwest corner of the university of Toronto, making spadina circle open to the public after years of inaccessibility, and offering an identity for the northern face for the first time. It is important to acknowledge that while the north-south axis are characterized by important symbolic relationships to the city, it is the east-west axis that is actually activated by daily pedestrian traffic, and thus, the site is bi-axially organized with strong markers on all faces. The expansion of knox college building requires a strategic re-adaptation of the existing court: internalizing the court into a flexible public hall, while completing a circuit of circulation around it on the northern wing, binding the new and the old into organic closure. While this flexible hall stands at the core of the building, where normatively there would be no light or access to views, in fact, in this case we have orchestrated lateral and vertical penetrations that create views to north spadina, bring in northern light for the studio skylights, and gain programmatic connections to critique spaces, the internal street, and studio spaces– making it function like the central plaza of the school.

Thus, both the east and west sides of the building are marked by new entryways. A public plaza on the east face helps to connect the building to the campus; the school’s gallery opens up onto this plaza. A landscape berm also flanks this space, taking advantage of its southern orientation to offer more seating. On the west edge, a more discreet arcade space is set up in a more diminutive manner to address the smaller residential scale of the neighborhood. The east and west portals give way to a new internal street. Every main public activity occurs on this street, and it is slated to remain open 24 hours a day. A café, gallery, flexible hall, fab labs, printing services, student lockers, administrative offices, and student lounge, among a range of other activities, all stem from the space of the street. A view north toward spadina boulevard opens up on the central axis, reconnecting the core of the building with the symbolic spine, while drawing in added natural light.

Access to the studio space above is gained by a controlled stair promenade. Ascending on the east-west axis, the stair arrives onto an open bleacher space. This space serves as a sectional bridge between the studio spaces on the third level and the flex hall at the core of the building. It functions as a crit space, while also a break-out space when classes are not in session. Most importantly, it also serves as an oculus to draw in light into the core of the building. The flex hall contains ‘saddle’ spaces on all sides, creating connections between all programs and the central space. Critique spaces, student lounges, studios spaces are all connected to the central hall, and yet the hall can also be sealed off as a dark screening room.  The flex hall can be divided into 3 spaces by large panelized walls, creating the possibility for three 80 person lecture halls.

The graduate studio space is a dedicated studio hall, with the ability to be organized in a variety of study spaces: as seminar style studios, individual desk studio spaces, collective collaborative fabrication spaces, among other organizations. The perimeter is lined with pin up and screen walls that serve as infrastructure for presentations and exposure of work underway. The roof of the building serves as a key architectural instrument: integrating day-lighting, hydrological control and structural optimization. As a firth-of-forth spanning system, two trusses cantilever from the stair cores on the east-west axis, while holding up an added oculus in the center. The structural configuration shapes the skylights, while also providing for the slopes that drain the rainwater towards the east and west drains– and down to a cistern system on each side of the building. All the environmental diffusers are situated on the ground, and thus the roof only contains some added lighting, sprinklers and venting.

DFALD required a new working prototype of sustainability to accommodate a program for studio space, fabrication workshops, classrooms, offices, library, cafe, exhibition space, auditorium, and state of the art ‘urban theater’.  Located on a busy urban artery, and circumscribed by a streetcar line, the circular site is an island amidst layers of urban activity. Perhaps the great challenge of maintaining the gothic heritage building has been the project’s greatest opportunity; the spires and edges of the historic spadina crescent create the ideal foil for a contemporary box with a deep floor plate requiring natural lights.  By both extending the logics of the existing building and establishing critical differences between the two this project appropriates the neo-gothic forms and language transforming them into mechanisms for water management, day-lighting and façade system panelization.

The silhouette of the east and west facades are, thus, a reflection of the hydrological organization of the roof system: drawing the water down a central downspout that serves as a reveal between the original building and the new addition. If the existing building is a neo-gothic structure, its characteristic features are its towers, windows and skyline. In essence, we have abstracted these very features as the basis for manipulation and extension of the building. Using high strength, thin panel concrete, we are able to use translated the load bearing aesthetic of the existing building towards a curtain wall building that is set to radicalize its thinness. 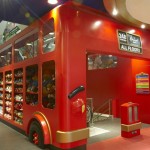 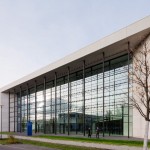