Snøhetta`s design of the Far Rockaway Branch Library in Far Rockaway, Queens. The new building will replace the existing library building, while also doubling the area of the existing space. The project, currently in design development in New York, has also received the Public Design Commission of the City of New York’s recognition for outstanding public projects, the Annual Award for Excellence in Design.

Today, Snøhetta releases the design of the Far Rockaway Branch Library in Far Rockaway, Queens. The new building will replace the existing library building, while also doubling the area of library spaces. The project, currently in design development in New York City, has also received the Public Design Commission of the City of New York's recognition for outstanding public projects, the Annual Award for Excellence in Design.

The Far Rockaway Library is located at the prominent intersection of Mott and Central Avenues in Far Rockaway, among the more dynamic, ethnically diverse communities in the borough of Queens. While the current library is small, it is heavily used, and its local importance is well-demonstrated in the aftermath of Hurricane Sandy when it was used to provide disaster relief to the community. This new building seeks to increase the services needed by the neighbourhood, and it is hoped that along with other revitalisation efforts, it will serve as a catalyst for community transformation.

The massing is a simple volume clad in fritted, coloured glass, with a gradient of colour reminiscent of the sky off the coast of Long Island. The simple form provides a calm contrast to the visual noise of surrounding retail outlets. The combination of transparency and translucency of the façade provides an awareness of the activity within as well as a degree of privacy for occupants of the library.

The primary organising elements are indicated with simple, clear forms. The entry is announced with a tall transparent glass pyramidal opening at the corner. The interior is organised around an inverted pyramidal atrium, which allows the penetration of natural light to the ground floor as well as a view of the sky from within the building. Combined, they provide the entry and circulation sequence through the building, and orient the visitor within.

The Far Rockaway Branch Library will comply with Local Law 86, seeking LEED Silver Certification, and will be sited at an elevation exceeding the new FEMA flood zone guidelines.  As part of the Percent for the Arts program, Snøhetta will be collaborating with an artist to  create a site specific artwork within the library. 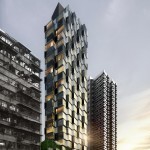 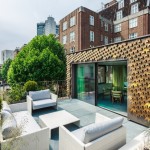