The programme of the National and University Library II comprises four programme units: free access library, storage and archive facilities, work units – expert library services, and the archaeological heritage of Roman Emona. Emona lies beneath the surface level, so the three remaining units are used as the base for volume composition. The units are organized into three "wings" or three "open books" of the library. Library services are housed in the lowest volume, oriented to northeast and the French Revolution Square. Volume connects itself to the urban fabric of the square; diagonally it discourses with Plečnik's national Library in a clear but quiet fashion. The public access wing forms the corner of Emonska and Zoisova Streets, where it balances between the busy traffic dynamics of the Slovenska – Zoisova intersection and the urban dynamics of French Revolution Square. The storage wing positions itself to the back of urban pulse, yet with its volume to the front of perception for visitors coming to the city from the south. All three volumes are lifted above Emona. Emona becomes part of Ljubljana and at same time part of the library; a walk through Emona becomes part of a routine. At both sources of dynamics – from the side of Faculty of Philosophy on the west and from French Revolution Square – volumes are lifted even higher, high porticos create a clear connotation of entrance. Volume dynamic follows the dynamic of the environment, the storage and free access wings clearly denote a drop towards Ljubljanica River, the services wings joins the tendency with its roof reading garden by addressing the urban scale of the adjoining square. Between the volumes, an atrium is created, thus introverting the urban energies into a peaceful atmosphere appropriate for studying; atrium is surrounded by a cloister, vertically repeated four times.

Moreover, the clear composition of three "wings"/"books" also indicates a decision for very a rational construction and efficient functioning. Each unit has its own construction, functional and climate demands – and the composition allocates each unit its own volume without compromise between systems with different conditions (functional, load bearing, climate). Each volume's organization is repeated vertically, distribution of installations is optimal, user paths are the shortest possible. Investment value was estimated at 34.000.000 €. Our proposal reflected the current state of mind in the world through its rational use of sources and expected low running costs. But it was a palace that won the competition. 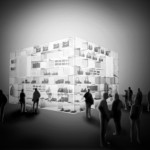 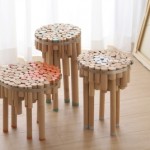