The West Kowloon Terminus functions as an indicator of how relations have improved between Hong Kong and mainland . The high-speed rail terminus station will connect Hong Kong to with the largest rail network in our history.  Located centrally in within the city’s urban realm, the 430,000 square meter facility, equipped with fifteen tracks, will be the largest below ground terminus station in the world.

The WKT will function more like an international airport than a rail station as the Hong Kong Special Administrative Region maintains economic and political differences from P.R.C. This means that the facility needs to have both custom and immigration controls for departing and arriving passengers. What is highly unusual in this facility is that the West Kowloon Terminus will have immigration domains for both Hong Kong and in the same facility, as opposed to how immigration works in a typical international airport, which only serves the host country.

The site’s proximity to the future West Kowloon Cultural District and to required a design which was highly influenced by civic demand. Adding to the challenge was the construction of a 400,000 square meters of commercial development on top of the station, which would be auctioned off to a developer at a later date. As the “gateway” to , it was considered vital to connect the station with the surrounding urban context and make one aware of the city’s character whether arriving or departing. In order to do this, the design efficiently compacted all of the supporting space to allow for a large void down into the departure hall below, with added apertures going down to the track platforms. The outside ground plane bends down to the hall and the roof structure above gestures toward the harbor. The result is a 45 meter high volume which focuses all attention to the south façade with views of the Hong Kong Central skyline, and beyond.

The terminus station has both regional commuter trains and long-haul high speed trains. The commuter trains go across Hong Kong to Shenzhen, a booming Chinese border city, and further North to , the capital of . Research performed on civil engineering concluded that based on the urban make-up and internal site restrictions, the short haul tracks needed to be placed on the western side of the site, and the long-haul on the eastern side. The locations of these tracks were thus fixed. In addition, research showed that 80% of the station users are short-haul commuters, pressuring the design to reduce travel times for these passengers as much as possible. The “baseline” scheme had segregated immigration, which seemed to make sense from a territorial point of view. However, this caused great inefficiencies within the planning diagram. The solution was to stack territories so that all immigration facilities for arrivals would be on one floor and all departure facilities on another.  This made the inner workings easier and more efficient. Locating the immigration facilities over the short-haul tracks significantly reduced station travel time for short-haul passengers. Their location being well beneath the density of the future commercial spaces optimizes the openness of the void and the entrance building on the opposite side of the site.

The converging tracks coming into the terminus station becomes a metaphor for ’s own converging forces. The project maximizes civic gestures both internally and externally. The station is sculpted out of the energy of these moves and strongly defines the design’s focus toward and the skyline. The West Kowloon Cultural District is invited into the site. A large “” opens up toward the cultural district and is defined on the other side with its own outdoor performance amphitheatre. The pedestrian flow into this amphitheatre continues up onto the roof top of the station where there is a highly vegetated sculpture garden, an extension of the green below. The resulting open space is almost five times the area of the already ambitious mandate in the master plan. The green space provides links flowing through the site to a Public Transport Interchange to the North, the Austin MTR Station to the East, the Kowloon Station Development and the Elements shopping mall to the West, as well as internal connections into the WKT itself and its future commercial development on top. This commercial development aspires to be seamlessly knitted into the overall flow of the project even though the success of the development is not dependent on this integration. The station will be situated in the southeast corner of the site. The will be defined by the station entrances and facilities on the east and west sides as well as adjacent paths moving up to the top of the station, into the green “roofscape”. The culmination of these ideas is an an observation deck on top of the entrance building’s crest, twenty five meters above the Civic Square and forty five meters above the Departure Hall below. At the top, the perfect view acts as an extension of the journey into Hong Kong – into and beyond the West Kowloon Cultural District; and the concrete jungle of . The station may be visible below as a reminder of where one came from but the future paths of discovery present themselves invitingly beyond… 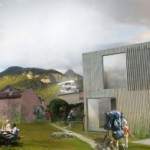 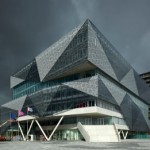