Aedas-designed Lè Architecture in Taipei, Taiwan, received the most public votes for Commercial-Office – High Rise (16+ Floors) and won Architizer A+ Popular Choice Awards 2018. This year the highly publicised campaign received over 400,000 public votes from more than 100 countries and territories.

Designed by Global Design Principal Dr Andy Wen, Lè Architecture in the Nangang district of Taipei is set to redefine Taipei’s rapidly developing skyline. Its design drew inspiration from the shape of the river pebbles along the Keelung River, developing a unique aesthetic concept that conveys the idea of roundness and elegance, as well as strength and character. The building’s egg-like shape implies it is an incubator of knowledge and a metaphor of intellectual revival, which integrates well with the local context and marks an important milestone in the revitalisation of the fast-emerging Nangang district. The 60-metre tall office building employs multiple strategies to add greenery to the façade and is focused on minimising energy demands which enabled it to achieve a LEED Gold certification. 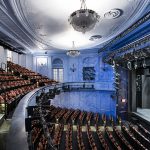 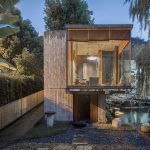