Project: Two Towers
Designed by ADEPT & Urbanus
Location: Shenzhen, China
Website: www.adeptarchitects.com& www.urbanus.com.cn
The winning proposal for Two Towers project in Chinese city of Shenzen comes from a joined effort by ADEPT and Urbanus practices. For more images of the project and architects description continue after the jump:

As the competition title suggests, the project is comprised of two towers, the CDB Tower (150 meters) and the Minsheng Financial Tower (120 meters), functioning as new headquarters for the two i nancial institutions. The challenge of designing two new towers in Shenzhen raised the question as to what kind of tower could be added in the context of an already impressive skyline. Analysis of this context suggested considerable emphasis has been placed in recent years on achieving extravagant, visually unique forms amongst the towers themselves – a situation that has generally occurred at the expense of the quality and liveliness of the urban spaces at their base. In addressing this, ‘The Two Towers’ project attempts to articulate the skyscraper not as a purely visual landmark, but as a functional landmark welcoming and embracing citizens and visitors. In this way, the skyscraper as a type is capable of contributing toward a future urban culture by stimulating the urban area that it is rooted in. The focus of the design therefore has been the activation of the ground l oors by placing active and public-oriented programs in visible positions, closely connected to the surrounding public realm. By shifting the volumes around a sunken plaza, a dynamic shaded public space is created underneath, supporting a clear identity for the two institutions. Furthermore, the volumes are broken down into a human scale on the ground l oor, creating a remarkable three-dimensional public space on many levels. Green and blue elements generate a pleasant micro-climate in these stacked spaces. Not only complying with the urban regulations and conditions of the local context, the scheme creates a diverse public space that exceeds the expectations implied in the brief. A key factor for the clients has been the representation of a stable image for the i nancial institution. With this in mind, the expression of the towers themselves rel ects strength combined with an image of generosity. Both towers are designed with structural cores and load-carrying façades leaving the oi ce spaces in the towers open and free of columns. The expressions of the towers are related, but dif erentiated to convey the separate identities of the two institutions. The façades are i nished in two dif erent types of stone – the CDB Tower in a darker tone and the Minsheng Financial Tower in a lighter tone. The glazing system on each tower underlines the two dif erent tower typologies – the vertical point and the rectangular slab. The façade design of both towers reacts to the amount of sunlight and energy each façade is exposed to. Detailed studies of sun conditions led to the design of an energy performing façade of ering more shade to sun-af ected areas. This results in a changing façade that of ers a soft gradient that is rel ected dif erently at each time of the day. Furthermore, the positioning of a series of atriums in the towers is based on views to the surroundings. In the atrium areas the windows expand to of er better views and more light to the interior spaces. Additionally, the atriums create interior gardens and recreational spaces in the oi ce towers, generating greater spatial variety and improved social interaction amongst the buildings’ users. 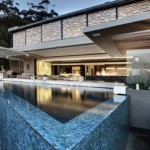 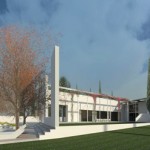