The new headquarters for China Central Television, OMA's largest project to date, combines the entire process of TV-making – administration, production, broadcasting – into a single loop of interconnected activity. Rising from a common platform accommodating production facilities, two towers – one dedicated to broadcasting, one to services, research, and education – lean towards each other and eventually merge in a 75-metre cantilever.

CCTV's distinctive loop aims to offer an alternative to the exhausted typology of the skyscraper. In spite of their potential to incubate new cultures, programs, and ways of life, most skyscrapers accommodate merely routine activity, arranged according to predictable patterns. Formally, their expressions of verticality have proven to stunt the imagination: as verticality soars, creativity crashes.

Instead of competing in the hopeless race for ultimate height and style within a traditional two-dimensional tower 'soaring' skyward, CCTV proposes a truly three-dimensional experience, culminating in a canopy that symbolically embraces the entire city. CCTV consolidates all its operations in a continuous flow, allowing each worker to be permanently aware of her colleagues – a chain of interdependence that promotes solidarity rather than isolation, collaboration instead of opposition.

The loop also facilitates an unprecedented degree of public access to the production of China's media: visitors will be admitted to a dedicated path circulating through the building, connecting all elements of the program and offering spectacular views from the multiple facades towards the CBD, the Forbidden City, and the rest of Beijing. 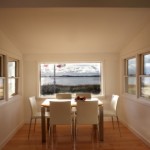 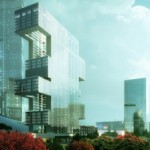