Lebanon Waterfront City recognizes its privileged position in the vicinity of Beirutand its essential condition as a place where land and water more than meet, they entwine. It arranges its composition as a smooth transition from the waters of the Mediterranean to the mountainous backdrop all-the-while celebrating the tamed water of the marina basin and the graceful vessels that dot it by framing its ever changing ever playful composition with a most elegant, superbly appointed promenade.

Rather than a monolithic fabric, the marina accepts the context that surrounds it derive from it a scale/ and rhythm, which is incorporated on to its own character. Its careful arrangement of height maximizes water views and creates backdrop sunset washed skyline.

The Master Plan embraces the tradition of rich community living design in the creation of the memorable places that follow rigorous planning principles proven to survive the test of time. The needs and wants of the community as a whole are catered to through a distribution of program in accordance with local and regional demands, centralization, mixing of uses, as well as the termination of vistas. Pedestrians friendly distances, convenience amenities, local school, civic buildings and religious components organize the neighborhood unit, which is connected to the greater whole and is in alignment with view corridors, green plazas and overall wind streams.

These strategies define the various precincts: North End, Marina Central and South End, which define the urban fabric of the city. An urban condition frames the street and mirrors in scale the development across it. Along the east of the marina the leisure program that borders the promenade is met with a gentler framing which respects and incorporates the vistas, and elsewhere as the water serves as a defining element, lower densities and ample public green spaces create intimate and welcoming spaces that ultimately provide Lebanon Waterfront City with unmistakable charm and appeal.

In every respect Lebanon Waterfront City is exemplary of the best practices of urbanism and architectural design, it is a hallmark project which restores time honored practices and principles in place-making while adapting to the realities of modern living and incorporating all that entails the highest quality of life. In every respect Lebanon Waterfront City rises to realize the vision of greatness set for it. 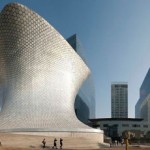