The 45 million Canadian dollars (€ 33 million) Central Library in the Canadian port city of Halifax, Nova Scotia will have a clear Canadian reference as well as a detectable Scandinavian design heritage as the winning team behind the design is the Canadian architectural practice Fowler Bauld & Mitchell and Danish schmidt hammer lassen architects. In March 2010, Fowler Bauld & Mitchell and schmidt hammer lassen architects won the international competition to design Halifax Central Library.

”In the design process we have been particular keen on reflecting the spirit of the local community as well as the ‘genus loci’ of the site making Halifax Central Library unique in many ways. We believe that Halifax Central Library will become a landmark cultural hub for the community,” said Morten Schmidt, Founding Partner at schmidt hammer lassen architects.

At this point, Fowler Bauld & Mitchell and schmidt hammer lassen architects enter four months of Design Development, with a final public presentation and unveiling of the final detail design in March/April 2011. Breaking ground is scheduled for mid 2011 and the library is due for completion in early 2014.

schmidt hammer lassen architects works with libraries across all scales from branch libraries and central libraries to university libraries. The practice is renowned for the extension of The Royal Library in Copenhagen, Denmark, and has also designed Halmstad Library and the extension of Växjö Library in Sweden. Ongoing library projects include The University of Aberdeen New Library in Scotland, UK, The Urban Mediaspace, Scandinavia’s biggest public library, in Aarhus, Denmark and the new Highlands Library for Edmonton Public Libraries in Alberta, Canada. 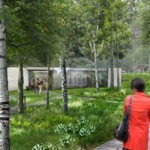