Skidmore, Owings & Merrill, Inc (SOM) has been awarded, by Blenheim Properties, the commission for the master plan for Green Tech City in Hanoi, Vietnam. SOM’s preliminary plan for a sustainable urban district has been applauded by local authorities, including the Head of Planning, the Chief Architect and the Mayor of Hanoi. SOM is now working closely with these authorities to finalize the project’s approach and ensure its delivery. SOM’s master plan creates a new district and urban vision for this area of Hanoi based on its local culture and urban heritage. The plan incorporates advanced city design methods and sustainable principles to reduce the demand for non-renewable resources and typical civil infrastructure. Covering an area of 145 hectares, the plan integrates two existing villages with future development and provides necessary community amenities to serve a future urban population in excess of 20,000 people. The Master Plan expands and reinforces the local traditions and green urban character of Hanoi. The plan also engages and enlivens the strategic green landscape corridor envisioned at the city scale along the adjoining river and applies state-of-the-art technology in carbon emissions reduction, energy needs reduction and smart infrastructure.

In addition to a new linear riverfront park, the Master Plan generates a series of organic, low-rise, pedestrian-friendly residential neighborhoods within the planned ‘Green Corridor’. This is balanced by a more urban and dense edge of high rise development articulating the future skyline of the district. A complete urban living environment will emerge on site, including a variety of housing types integrated with schools, healthcare clinics, sports and other public facilities. One of the key architectural features at the heart of the plan is a new Cultural Forum building animating a civic piazza, establishing an iconic meeting space for this new community and the wider population of Hanoi. This building is designed to accommodate a range of uses including an auditorium, TV studio, art gallery, mediateque, and cafés. The plan was informed by a rigorous process designed to optimize its environmental sustainability. Wind and solar analyses were used to determine the optimal orientation of streets and buildings in order to create comfortable urban micro-climates. These ensure the plan will harness natural environmental conditions in order to maximize comfort and minimize infrastructure requirements as well as operational energy costs. Sustainable district-wide technologies like canal water cooling, tri-generation plants, waste recycling and rainwater harvesting are integral components of the plan. While contemporary building technology is championed, the plan also promotes low-tech passive design strategies for environmentally-friendly architecture that is appropriate for the local economy and Vietnamese climate and culture.

In addition to SOM’s timeless, internationally-recognized architecture, the firm has also undertaken some of the largest and most complex development projects in the world. These include the master plan for Canary Wharf in London, the National Plan for the Kingdom of Bahrain and the redevelopment strategy for the historic Eastern Harbor of Alexandria, Egypt. SOM focuses on cities as the places where the strongest forces for change are at work and where there is the greatest need to address issues of livability, function and growth. SOM responds by creating long-range plans for whole cities, central city and waterfront districts, and urban neighborhoods with key built projects that become homes and places of work.

SOM’s City Design Practice is currently engaged in major projects throughout the Americas, Europe, the Middle East, India and Asia. Green Tech City is a significant addition to SOM's worldwide range of innovative and sustainable master plans and is one of three new large-scale plans being developed by SOM in Vietnam. This follows the firm’s Saigon South Master Plan in Ho Chi Minh City, Vietnam which was completed in the late 1990’s. The first major phases of development have recently been completed, including the impressive new district of Phu My Hung. SOM’s legacy of large scale city planning in the region continues, including the Baietan Master Plan in central Guangzhou, China, the Binhai New Area CBD in Tianjin, China and the Beijing Central Business District (CBD) East Extension Master Plan. 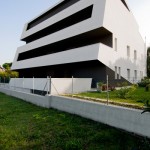