Vito Nesta designed the stunning interiors for the Boa Boa, a restaurant in Brera, Milan.  Take a look at the complete story after the jump.

BOA BOA is a Brasilian Fusion restaurant sited in Via Pontaccio 5 in the Brera district of Milan. Three colors with their different shades dominate the space: rust, blue and bottle green.

On the background wall stands out the Casablanca wallpaper in blue and ice gray tones, designed by Vito Nesta for Devon & Devon. On the adjacent wall a collage of vintage mirrors recalls the Venetian technique of the early sixteenth century. At the time, in fact, due to the impossibility of producing large mirrors, smaller mirrors were placed side by side to cover large surfaces an example is the Royal Palace of Caserta.

The same technique was then reused by Piero Portaluppi in the frame of mirrors around the fireplace of Villa Mozart.

The space seems to be suspended between heaven and earth and softly brings the viewer closer to the colors of Brazil. In fact, the floor is a resin in shades of sand, while the ceiling is glazed with blue as if it were a sky.

The colorful lamps by Servomuto and tables and chairs by Calligaris complete the decor of the room.

The bathroom, on the other hand, is a space that allows you to isolate yourself from the space you are in, taking a little trip. When you close the door you are surrounded by a seaweed jungle among which many goldfish swim silently, painted on the Samoa wallpaper by Vito Nesta for Devon & Devon. The same red of the fish is used to color the ceiling of the room. 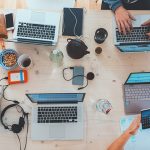 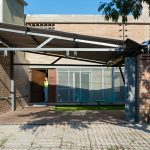