In Copper Head bar high technologies and classic traditions merged into one. Brewery gives an opportunity not only enjoy freshly brewed beverage, and to look behind the scenes the process of making it. The bar opens its door in historical downtown of Ivano-Frankivsk, in building, which constructed during the Austro-Hungarian Empire in the late 19th century. The building has special history. In 1897 firstly in the city was shown movie.
Entrance group harmoniously inscribed in the facade of the building, without spoiling its architectural image.
Visiting card of Copper Head – it is the bar. It meets guests and located right behind of the bar beer tanks immediately set up a guest on relevant topics
At the basement floor located the heart of Copper Head – the brewery, which is located behind of the glass, to make the process of brewery accessible for guests. The concept of transparency developed open part of the kitchen too, was visitors can see all finalizing works at the kitchen.
Copper Head – that is about beer. The concept of the bar reflects the idea of a single organism, which has its own “vessel.” Idea expressed with a copper pipes, passing through the whole bar, extending the walls and becomes the light. In the bar each detail – from door handles to authors light – reminds about beer theme.
The anchor element of the basement floor is installation of ceramic balls, symbolizing the integral attribute of the drink – beer head. Another installation – wall metallic panel with a perforated hops picture. To authors idea of the bar includes an array of lamps on the basis of beer glasses.
The copper theme also gets its continuation. The material meets not only in the interior, also in logo and other elements of identity of the bar. 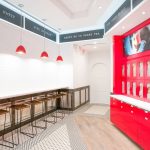 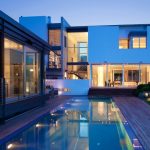