18.36.54 House is one of the latest projects by the famed Studio Daniel Libeskind we get to share on our pages.18.36.54 derives from the 18 planes, 36 points, and 54 lines of the spiralling ribbon which defines it’s living spaces. For more images and architects’ description continue after the jump: The name of this 2 000 sqf home derives from the 18 planes, 36 points, and 54 lines of the spiraling ribbon which defines it’s living spaces. This figure, situated on 54 bucolic acres in western Connecticut is clad in mirror-finish bronzed stainless steel and, as such, is never experienced the same way twice. Its reflective luster accentuates and exaggerates environmental changes as weather, time-of-day, and seasons turn around it. Within the planes of the ribbon, enclosure is achieved via large glass planes which virtually disappear. From inside, unimpeded picturesque views of hay meadows and distant foothills are framed in surprising ways by the sloping walls and ceilings. The interior finishes, cabinetry, and built-in furniture are custom handcrafted from locally harvested oak planks. These elements, along with subtle elevation changes in the concrete floor distinguish the kitchen, living, dining, and sleeping areas without separating them. Circulation throughout the home is seamless and free-flowing, a theme which carries through in the nearly-nonexistent distinction between inside and outside. Challenging both traditional and modern notions of “the house in the landscape,” this bold design does not sacrifice itself to its natural setting, but selectively incorporates the elements therein for the enhancement of both house and landscape. 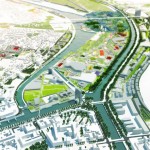 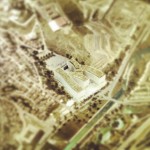