From the architects: The clubhouse is located at Estancia La Paz, an icon Argentina’s historic 19th century architecture, and one of the country’s main political and social scenarios. Its owner was then President Julio Argentino Roca.

Once on the site, at the end of the golf course’s 18th hole, what most struck us were the piles of cracked and neatly arranged logs. We discovered that these had been silent witnesses of the Estancia’s history, planted more than 100 years ago.

The project had to house a bar, locker rooms, and an administrative office in 175 m². Our strategy was to fragment the program into three buildings, generating a kind of village with terraces and different accesses, creating a wide variety of spatial scenarios.

The other major challenge was to develop all the façades with more than 20,000 logs of different species and sizes that were on the site. To prevent humidity from rotting them, the entire bark was manually removed, the building was raised one meter from the ground, and the log walls were separated 20cm from the envelope of the building to allow air to circulate freely between them.

To give the building more expressiveness and avoid it looking like a pile of logs, we decided to work with sculptors.

From the first moment light was one of the central themes of the building. To strengthen the light that passes through the perforated walls we decided that all the internal walls should be made of translucent glass, generating a light play that changes during the day and that also varies throughout the year. Just as the building carries light into its interior during the day, at night the opposite effect occurs; it is the building that expels artificial light through its wooden envelope.

The skin of the building generates an ambiguous wrapping that changes the way it shows manifests both externally and internally, going from from opaque to translucent, from dense to ethereal, the architecture that was generated by simple materials and construction techniques becomes complex. 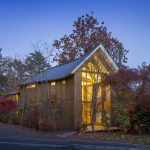 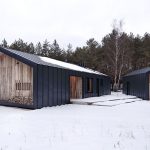