The Drift House proposal was designed by Neeraj Bhatia of The Open Workshop, for a location in the North part of Canada which has a large potential of natural resources available for energy harvesting, providing an eco-friendly sentiment to the design. With insufficient core populations to support public structures, dwelling typologies have attained the highest level of refinement within the Arctic’s unique climate. Pre-WWII, indigenous, Inuit housing types not only embraced the nomadic Inuit lifestyle, but with zero ecological footprint, these dwellings employed opportunities from the landscape and atmosphere to form a complex shelter that negotiated thermal performance, local materials, soft construction techniques, program, and cultural values. Permanent architecture, in the form of prefabricated housing, was employed by the Canadian Government during the Cold War in an effort to assert Arctic Sovereignty. Despite instilling new notions of comfort and durability, this government housing neglected the cultural and sustainable intelligence of traditional dwellings. Importing a ‘southern’ model of dwelling, the housing took the form of hermetic containers, which were highly contingent on imported materials, energy consumption, labor, and transport costs. More significantly, adopting their use forced a transformation on the Inuit lifestyle that severed their connection to the dynamic landscape. These government housing typologies have formed the template for Arctic shelter in Canada that still persists today. Housing in the North is currently undergoing a crisis due to decadent construction and energy costs, and the corresponding ramifications on overcrowding and deprivation. The Drift House hybridizes the intelligence of tradition and technology in both of the above housing systems to provide a possible direction for future constructions in the Arctic. The Drift House is parasitic to snow fences, a typically static infrastructure that is used to protect roadways from snow accumulation. These fences are recalibrated with differential mesh openings (porosity) and heights to produce a precise pattern of passive snow accumulation from the dynamics of snowdrift. The Drift House is comprised of three surfaces formed from ETFE panels to create a series of enclosed areas calibrated in relation to accumulated snowdrift. During the summer, three enclosed zones with courtyards form a stronger connection with the landscape. During the winter, accumulated snowdrifts activate the house, essentially tipping the three units into a single, thermally nested space. Not only does the snow passively ‘build’ part of the dwelling, it also serves as counterweight to the cantilevered structure, insulation for the envelope, and a source of water for the inhabitants. The resulting, nested environments produce a series of thermal zones related to the interior program and traditional lifestyles. By understanding a malleable system, such as snowdrift, architecture can be formed in response to the landscape — calibrating, mitigating and using once ‘problematic’ environments in an opportunistic manner. 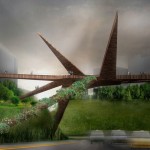 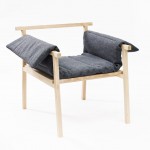