Impressive project design of Glebe Residence in Canadian town of Ottawa comes from the drawing board of Batay-Csorba Architects, who share with us their project. The Glebe Residence is a 1,500sf addition and full interior renovation to the 2,200sf single family residence for a family of four outdoor enthusiasts. Located in the southern portion of Ottawa known as the Glebe, the project sits just two blocks from Lansdowne Park and Rideau Canal.

Eleven decades after the original house was constructed the context has grown around it producing a union of old and new. The dialectic between building on the past and opening to the future is central to how the project was approached. The massing both enforces contextual relationships while forging new ones. The two story existing rectilinear brick massing was retained providing a direct reference to its neighbouring context, while the structurally compromised existing gambrel roof was replaced with a new third floor addition. The new third floor addition is subtly peeled back from the front facade and cantilevered along the north side of the existing massing in order to differentiate itself and produce visual tension and movement. The new third story extends the length of the house and connects to the rear three story addition. The rear massing strategy is circumscribed by a historic sugar maple tree located on the site. The conflict between the required additional program and the limitations imposed by the existing tree and site setbacks create a massing that uses the tree as a central pivot for the shifting geometry, creating a series of diagonally cantilevered masses. The relationship between the residence and the tree is facilitated through a series of ever changing oblique relationships and views such that each space develops it own unique relationship with the specimen tree.

The lack of sectional continuity of the traditional Victorian typology is challenged by penetrating the volume with a series of interconnected voids, creating light shafts and visual relationships between rooms typically separated. The three story voids, while allowing interaction between floors, also create a natural chimney effect for passive ventilation which terminates with a series of solar powered operable skylights.

The client’s connection to the outdoors and need to maintain the existing sugar maple tree was of key influence to the design. On the third floor the master suite extends to the exterior via two distinctive garden types. The first space is conceived as an introverted private roof garden secluded from direct engagement with adjacent properties by nine foot high walls. The second garden space is a sliver of deck space exposed to the foliage of the specimen tree, which acts again to reposition the owner within the ongoing relationship to the existing tree, and provides for unobstructed views of the property.

The exterior façade, clad in coarse white brick and smooth standing seam black metal panels, were selected to emphasize depth, movement, and contrast between the two massing elements. A random pattern was created from three standardized panel sizes which were replicated on each of the three levels; accentuating the perspectival shifts and visual depth within the overall massing.

The project’s sustainable objectives integrate environmental performances within organizational and contextual strategies. The existing specimen tree on the site was preserved through the use of a metal helical pile system that eliminated disturbance of the tree root structure. The new internal voids through the house provide for passive ventilation, creating an internal chimney effect which draws warm air up three stories to a series of four solar powered operable north facing skylights with automated sun control devices. The skylights help to bring light into the depth of the narrow house, providing 100% more natural light and privacy versus regular windows and reduce solar heat gain by minimizing windows and reducing artificial lighting and air conditioning electrical loads. The pivoting and cantilevered rear addition provides natural shading on the west facing façade along with the existing mature tree. The north façade’s thickened high performance envelope has minimal openings, while the skylights and roof garden give maximum day lighting to the master suite. 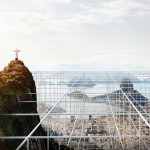 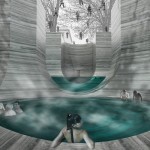