The site is located in Nasu, Tochigi Prefecture, well known area as a summer resort. Our client is a married couple who enjoys organic farming with local primeval vegetables on weekend. They desire not to cut woods in the site as much as possible and to live in the surrounding woods.
Since the site is located in the midst of dense woods, we came up with the idea of having a high ceiling to let the direct sunlight in the house. However, this would result in the space becoming too large and cost a lot to run the air conditioning. Therefore, we eliminated unnecessary space. First, we made sitting and lying spaces along the walls, and cut down the upper space diagonally to make the ceiling lower based on the way people move. This resulted in a tent shaped-house with only one third the volumes.
It is similar to primitive spaces seen in the houses of the Jomon People (Ancient Japanese), native Africans and Mongolians. Because the family sits along the low wall facing each other, the structure of the house initiates a lifestyle where there is close interaction.
In addition, this form matches the tree branches that spread out radially, allowing the house to be built without cutting most of the trees. This enables a warm space to be created that mingles with the trees. 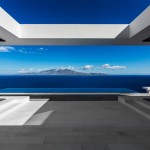 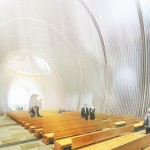