Netherlands based LOLA Landscape Architects team shares with us their awarded proposal for the design of Sokolniki Park in Moscow. LOLA practice has worked on their project in collaboration with Taller301, Land+CC and aZONE to win the third prize in the competition for the design of this massive urban affair. As the winners of the 3rd prize they will be involved in the further development of Moscow’s biggest urban park.

For more of the park continue below: The park
Park Sokolniki is Moscow’s biggest and most visited park, counting 520 hectares. It was planted under the rule of Peter the Great and has evolved into an urbancity forest, comparable to Tiergarten in Berlin and Bois de Boulogne in Paris, with an intensive park program.

The competition
For the competition, 10 finalists were selected, from 6 countries – Russia, the Netherlands, China, France, UK and Spain. They were given two months to develop proposals for the development of the park. “All teams coped with this task brilliantly,” – said Sergei Kapkov, chairman of the jury, government minister Moscow and the head of the Department of Culture.According to Kapkov the experience of such an open international competition for the creation of the public space is critical to the capital. “Today, the Department of Culture of Moscow has over a 100 parks under its responsibility, of which its improvement and development should be completed by the end of 2018. During the competition, we met with a number of highly qualified foreign and Russian teams, which we plan to attract in the future for this work,” he said. The proposal
The competition entry, called ‘Evolutionary heritage’, is a proposal for a gradual upgrading of the park. It has always changed and adapted to the times. This is its history, its heritage and its character; and thus forms a retroactive manifesto. The park should continue to evolve and change – allowing elements to die, adapt, emerge, and return. Ideas and thoughts from the past can return with a new twist. Every two years a new theme is introduced the park, that structures the realisation of one one iconic project, several small scaled interventions, lectures and debates en restructuring of maintenance.

One element of the evolving heritage is to form an iconic project for resilience. It is the realization of a two kilometre long greenhouse on a park axes. It will be the first winter promenade in the world. Walking through the greenhouse would lead one along many examples of resilient development and would be seen as a monument to the famous Kitchen debates. The greenhouse axis is formed by relocating existing municipal nursery. This large space in the forest will be adapted as a glade: a big open space for barbecuing, sunbathing and playing. The species grown in the greenhouse will be drastically diversified in order to plant for a diverse ecology. Next to that, the vegetables will be grown, which can be served in the restaurants in the park.

The consortium shared the thirdprizewithTurenscape (CH). The first prize went toWowhaus (RU), the second prize went toDebarre + Duplantiers (FR). All winners will be involved in the further development of the park. For more of the project log on to www.lolaweb.nl. 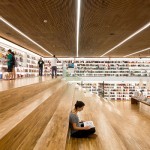