As the first airport  project by acclaimed architects Massimiliano and Doriana Fuksas it is set to become an iconic landmark that will boost the economic development of Shenzhen – one of the fastest-growing cities in the world. The highly anticipated new terminal at Shenzhen Bao’an International Airport, Guangdong, China, will be operational from the 28 November, 2013.

The first airport by acclaimed architects Massimiliano and Doriana Fuksas it is set to become an iconic landmark that will boost the economic development of Shenzhen – one of the fastest-growing cities in the world.

Won by international competition, it has undergone a remarkably rapid process of design and construction, completing within 3 years.

The client, Shenzhen Airport (Group) Co., is so pleased with the striking design that it is taking the unusual step of trying to copyright it.

The terminal – the largest single public building to be built to date in Shenzhen – encompasses 63 contact gates, with a further 15 remote gates and significant retail space. It will increase the capacity of the airport by 58%, allowing the airport to handle up to 45 million passengers per year.

The sculptural 500,000 sq.m. / 5,381,955 sq.ft (approx.) terminal, evokes the image of a manta ray and features a striking internal and external double ‘skin’ honeycomb motif that wraps the structure. At 1.5 km long, with roof spans of up to 80m, honeycomb shaped metal and glass panels punctuate the façade of the terminal allowing natural light to filter through. On the interior, the terminal is characterized by distinctive white conical supporting columns that rise to touch the roof at a cathedral-like scale.

The focal point of the design is the concourse located at the intersection of the building. Consisting of three levels – departure, arrivals and services – they vertically connect to create full height voids, allowing natural light to filter from the highest level down to the lowest.

Studio Fuksas has created an interior, as striking and elegant as the exterior. The spatial concept is one of fluidity and combines two different ideas: the idea of movement and the idea of pause. Carefully considering the human experience of such environments, Studio Fuksas focused on processing times, walking distances, ease of orientation, crowding, and availability of desired amenities.

Stand-out features of the interior design include stylized white ‘trees’ that serve as air conditioning vents, and check-in ‘islands’, gates and passport-check areas with a stainless steel finish that beautifully reflect the honeycomb patterns from above. The honeycomb motif translates through into many aspects of the interior and at different scales – from the larger retail boxes to smaller 3D imprints in the wall cover.

The Studio Fuksas designed Terminal 3 is of critical importance to the future of Shenzhen as a booming business and tourist destination, and will bring benefits to the region as a whole.

Studio Fuksas are engaged on two further phases of the airport extension, scheduled to complete in 2025 and 2035 respectively. 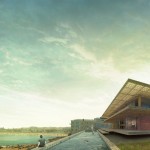 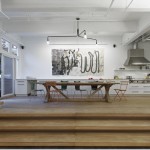