Transbay Transit Center will be a transit station in downtown of San Francisco, linking 11 transit systems and connecting the city to the region, the state, and the nation. But, important part is the roof top which will be a 2.2 hectare park exceptionally designed as an urban oasis. Constructions of the Transit Center will end in 2017 and it will be supervised by the Pelli Clarke Pelli Architects. Transbay Transit Center, opening in 2017, will be a state-​of-​the-​art multimodal transit station in downtown San Francisco, linking 11 transit systems and connecting the city to the region, the state, and the nation. The innovative, highly sustainable design includes a 2.2 hectare rooftop park that will anchor the growth of a new mixed-​use neighborhood. In the spirit of New York’s Grand Central Terminal and London’s Victoria Station, Transbay’s soaring light-​filled spaces will give San Francisco a grand entrance that befits its status as one of the world’s great cities. The new Transit Center will stretch for five blocks along Mission Street, one block south of the city’s Financial District. A gently undulating glass wall, floating above the street on angled steel columns, will be visible from afar, creating a graceful, luminous, and welcoming image. At street level, shops and cafes will draw visitors and energize the surrounding neighborhood, while high above, the trees and flowers of the rooftop park will invite people to visit for longer periods, transforming the Transit Center from a commuter hub to an urban destination. Within the Transit Center, the space is open and light-​filled. Tall, structurally expressive skylights — “Light Columns” — bring sunshine deep into the building, creating a vibrant, inviting atmosphere. The largest Light Column forms the central element of the 36-​meter tall Grand Hall, Transbay’s primary public space. Reaching from the park, down through the bus deck and Grand Hall, and all the way to the train platforms two stories below grade, this dramatic structure will provide light and long views to all areas of the Transit Center. The heart of Transbay’s design is the rooftop park. Dense with nature and activities, it will have over a dozen entry points, potentially including bridges to surrounding buildings. Active and passive uses are woven into the landscape, including a 1,000-person amphitheater, cafes, and a children’s playground, as well as quiet areas for reading, picnicking or simply taking a break. The park will present a wide variety of Bay Area ecologies, from oak trees to a wetland marsh. The park is symbolic of Transbay Transit Center’s considerable commitment to environmental quality and sustainability. The building’s annual energy consumption is projected to be up to 25 percent lower than the 2008 Title 24 Energy Efficiency Standards, and the project is on track to receive a Gold certification under the LEED 2009 rating system. The Transbay Joint Powers Authority, the public agency charged with implementing the Transbay project, has commissioned four major artworks that will be integrated with the Transit Center’s design. Currently under development, each piece will emerge from a close collaboration between the artists and Pelli Clarke Pelli Architects, blurring the line between art and architecture and making both more accessible to the general public. 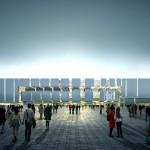 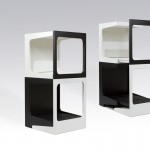